Details surrounding a new Skagen Falster 3 Wear OS device have just leaked courtesy of Amazon. Although there doesn't appear to have been any announcement for the new device, a listing for it has silently appeared on the retailer's site, revealing photos of the watch, a handful of specs, features, physical dimensions, and price: $295. In fact, you can even pre-order it now, with an expected release date of January 25th. 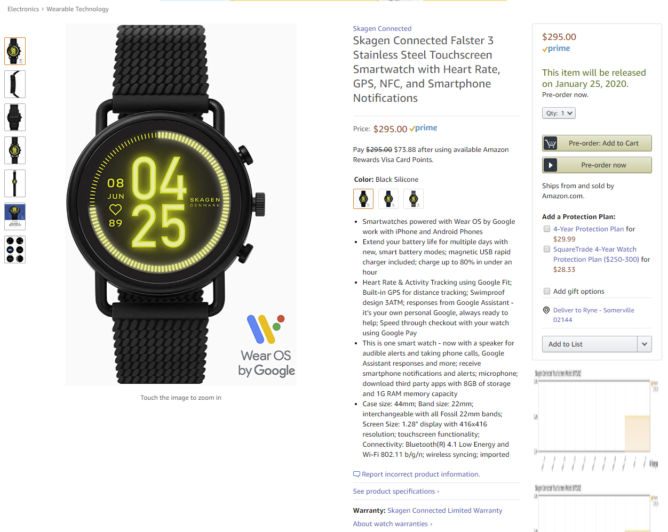 Screenshot of the Amazon product listing, in case it's pulled. (Also backed up to the Internet Archive here.)

The product description and specifications sections on Amazon are still empty, and that's usually where most of the meat for a given product's listing ultimately lives, but the bulleted item summary at the top contains plenty of details across the three colorways (Black Silicone, Blue Silicone, and Gunmetal Steel Mesh) plus a ton of photos: The Falster 3 will land with 8GB of storage and 1GB of RAM. The SoC isn't listed by name, but if the Bluetooth LE 4.1 specification is to be trusted, this could be powered by the older Wear 2100 platform like the Falster 2, rather than the newer (and better) 3100, which supports Bluetooth LE 4.2. (Perhaps the Bluetooth version is listed in error. Pushing out a $300 Wear OS device with an older chipset seems like a pretty bad idea to me.) Other connectivity options include 802.11 b/g/n Wi-Fi and Google Pay support via NFC. Its round, presumably AMOLED display will be 1.28" at a 416x416 resolution.

Physically, it looks similar to the Falster 2, though the silicone bands now have a mesh-like surface, more reminiscent of the metal bands. Unlike the older watch, though, the Falster 3 has a speaker, so it can do calls and respond via the Assistant from your wrist. Heart rate and activity tracking are built-in, so presumably it has a heart rate sensor, though the images obscure that portion of the case back. Case dimensions clock in at 44mm, with a 22mm band. As with previous Falsters (and most Wear OS devices), it will charge via a magnetic USB "rapid charger," which can top it up to 80% in less than an hour. Battery life is described on one color's listing as lasting twenty-four hours, while another says "multiple days" as a result of new "smart battery modes."

The Wear OS-powered smartwatch will run $295 according to the listing, which allows you to pre-order one at this very moment, with an expected January 25th release date — probably the official launch date, if it isn't a placeholder.

New rumor says there will only be one Pixel 4a variant, no XL version this year