The last few years have seen Samsung (and other) flagships inch closer to the $1000 mark, virtually vacating the $600-700 segment where devices like the OnePlus 7 Pro and iPhone XR mushroomed. These flag-bearers of the affordable flagship category soon garnered a rather widespread appeal, naturally leaving Samsung wanting a piece of the pie. Rumors say that the South Korean tech giant could be working on a pair of Lite models — the Galaxy Note10 Lite and the S10 Lite — that will possibly strike the right balance between premium features and affordability.

With their possible launch nearing, we've seen a deluge of leaks and rumors, and keeping pace with them is a bit challenging. To mitigate that, we’ve compiled every piece of information available about the two phones and laid it out in this digestible roundup.

The model number SM-N770F surfaced a couple of months back, which didn’t follow the usual SM-N9xx format used for recent Notes. A report later clarified that the phone may launch as the Galaxy Note10 Lite, following the footsteps of the Note 3 Neo (SM-N750F) from 2014. As one would expect from a Lite model, the phone will supposedly be positioned below the flagship 2019 Notes, and should also carry a matching price tag.

Q: Will the Galaxy Note10 Lite have a headphone jack?

Q: What kind of fingerprint reader will the Galaxy Note10 Lite have?

Thanks to a couple of leaks, we know that the upcoming phone will blend the Note10’s front with what appears to be Samsung’s design philosophy (with square rear camera modules) for 2020. The OnLeaks renders of the Note10 Lite, which leaked earlier this month, were basically dark silhouettes, though they still managed to give away quite a bit. For one, the handset will have an S Pen (duh!), will bring the headphone jack back from its grave, and may even have an in-display fingerprint reader (ultrasonic, likely), since no capacitive sensor is in sight. 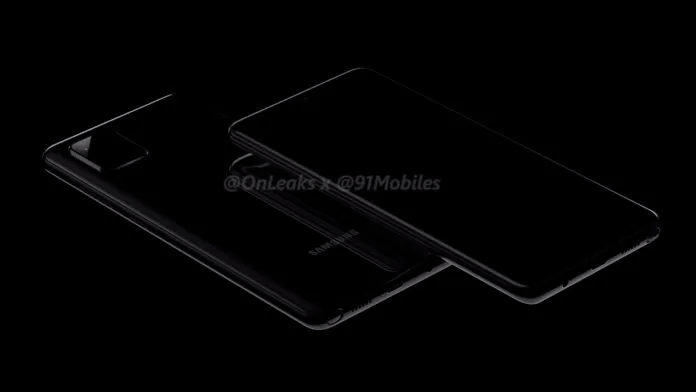 Speculation is divided on whether Samsung will use glass for the phone’s back or the 3D Glasstic (glass+plastic) material that debuted with some lower-end Galaxy A phones in February. Either way, it’ll get a metal chassis, and a rather recent leak from WinFuture says that the phone will come in three shades — black, red, and a whitish gradient hue — along with matching styli (pictured below). Besides that, the Note10 Lite will also sport a flat display — possibly FHD+ AMOLED panel measuring somewhere between 6.5 and 6.7 inches — with a centered hole punch and minimal bezels.

Its leaked live images (below) show a design language that broadly matches what previous reports claimed, including the centered hole-punch camera on the front and the triple-camera cluster on the opposite side. You can also see the “Galaxy Note10 Lite” branding appearing in the boot animation and the About phone screen. Q: Which processor will the Galaxy Note10 Lite use?

Things get a little unusual here, given the choices Samsung seems to have made with its cheaper Galaxy Note. The SM-N770F appeared on Geekbench, revealing some key details such as the presence of 6GB of RAM and Android 10. The listing also pointed at the Exynos 9810 chipset that powered 2018 Galaxy S and Note series devices. 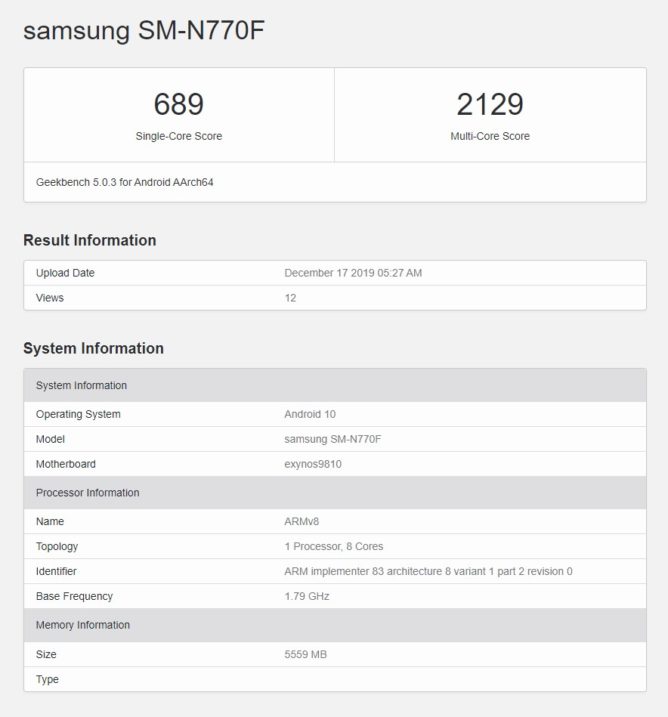 The processor isn’t notably lacking, but it’ll still place the Note10 Lite below the S10 Lite that could be powered by a newer Snapdragon 800-series chip — more on that in the S10 Lite section below.

Q: How many cameras will the Galaxy Note10 Lite have?

A: Three on the back, one on the front.

While we didn’t previously know much about the camera specifics, except for the fact that the phone will have three rear cameras, the leaked spec sheet does give some insight. Aside from the primary 12MP dual-pixel sensor, the phone will have an ultra-wide lens along with a 2x telephoto lens. For the front, it’ll take cues from the current Note10 models to include a hole-punch 32MP camera.

A: We're not sure right now, but the chances are high.

Samsung has shipped Bluetooth-enabled S Pens with its Note devices for the past two generations, and the Note10 Lite’s won't be any different. In fact, it’s among the first accessories to pick a Bluetooth 5.1 certification, which has led to the speculation that it may support spatial awareness. However, the device itself is certified for the older 5.0 standard. 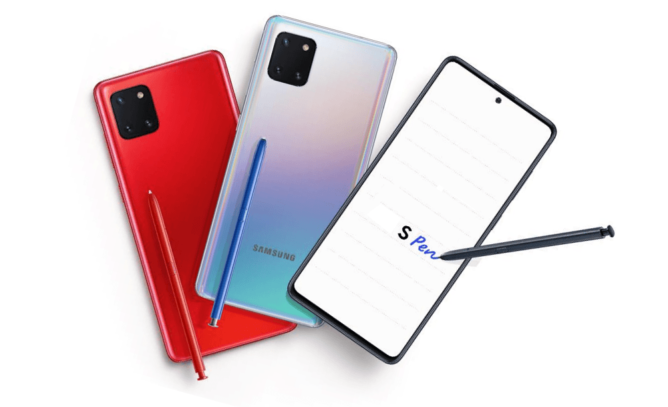 We’re not quite sure if this Samsung stylus will support features like Air Actions that came with current models. However, it will support 4096 levels of pressure sensitivity to capture strokes accurately, but with a latency of just under 70ms.

Q: What will be Galaxy Note10 Lite's battery size? What about fast charging?

SamMobile reported a picture of a Samsung battery unit with model number EB-BN770ABY (note the “N770” part), claiming that the upcoming Galaxy Note will use a 4500mAh cell — a jump of 200mAh from the Note10+’s, though the support for 45W charging speed isn’t certain. 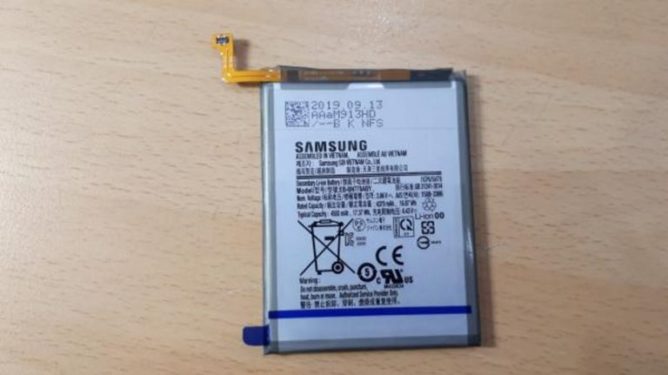 Q: When will Samsung announce the Galaxy Note10 Lite?

A: Possibly around mid-January.

A 91mobiles report previously suggested a December launch, but a follow-up post from the publication indicated that the Indian announcement might have been deferred until mid-January 2020. The Note10 Lite will reach markets outside India as it has already bagged an FCC certificate, and its support page recently went live on Samsung Spain’s website. The Korea Herald says that the phone may make an appearance ahead of its announcement at CES 2020 that is scheduled between January 7 and 10 in Las Vegas.

The phone was spotted listed on a Slovakian retailer’s website a couple of weeks back with a price tag of €609 ($675). WinFuture, on the other hand, suggested a price of €630 ($698) in the Iberian Peninsula, though with a disclaimer that the prices could be lower outside the region. In comparison, the high-end Note10 series launched with a starting price of $949 for the unlocked variant.

Samsung’s early 2019 flagship series might also add a Lite variant in the coming weeks. The model number (SM-G770F) associated with the Galaxy S10 Lite surfaced around the same time as the Note10 Lite. The name may lead you to believe that the phone would be in the same league as the S10e, but the S10 Lite is supposed to differentiate itself by following the 2020 design theme and having a bigger footprint. Rumors suggest that Samsung may rebrand its unannounced Galaxy A91 to S10 Lite in some markets, given their uncanny resemblance in leaks, but that's in dispute.

Q: Will the Galaxy S10 Lite have a headphone jack?

A few weeks back, the higher mid-range Galaxy A91 leaked in a new set of renders from OnLeaks, giving away how the S10 Lite may look like, based on their speculated association. In these renders (below), the phone has a nearly all-display front along with a hole-punch selfie camera. A square bump on the back houses the camera cluster, similar to some newer Samsung phones. Interestingly, the renders didn’t show a headphone jack, and the S10 Lite may follow the footsteps of the flagship Note10 series. 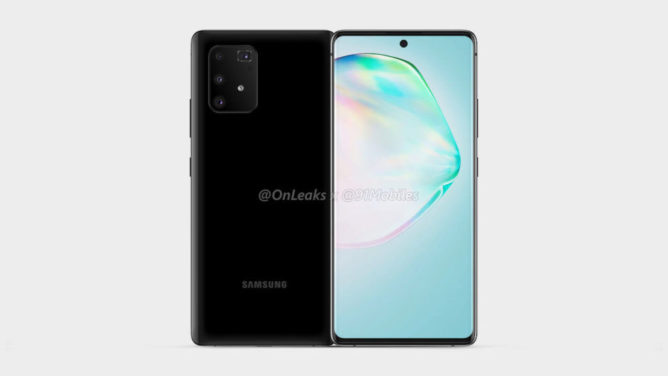 Q: What kind of fingerprint reader will the Galaxy S10 Lite have?

A: Possibly an in-display ultrasonic scanner.

A separate WinFuture report pointed out that the Galaxy S10 Lite will use a 6.7-inch 1080p AMOLED display, while SamMobile could confirm its white, black, and blue color options. We might be looking at an in-display fingerprint scanner since there isn’t any other biometrics sensor visible in the leaked renders, though we aren’t sure if Samsung will keep the ultrasonic scanner or use its optical alternative.

Following his previous leak, Steve McFly of OnLeaks recently tweeted an alleged render of the S10 Lite claiming it would differ from the A91, although very slightly. The number of rear cameras may vary on both devices (more details in the camera section below), while they’re still expected to share an identical overall design.

The S10 Lite user manual (in Portuguese) obtained by SamMobile includes a design outline that corroborates what we’ve seen so far. Thin bezels, a hole-punch selfie camera, and an under-display fingerprint reader are all part of these schematics, while the headphone jack remains noticeably absent. Another similar diagram on page 16 confirms the presence of a hybrid dual-SIM tray, giving you the option to either pop a microSD or a second SIM card. 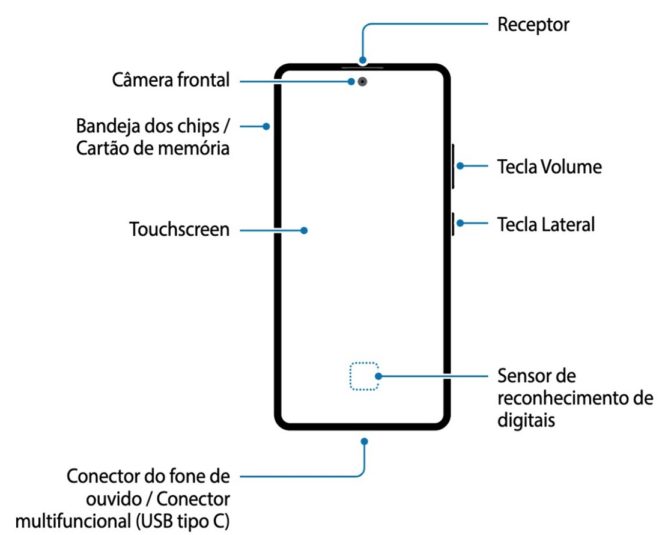 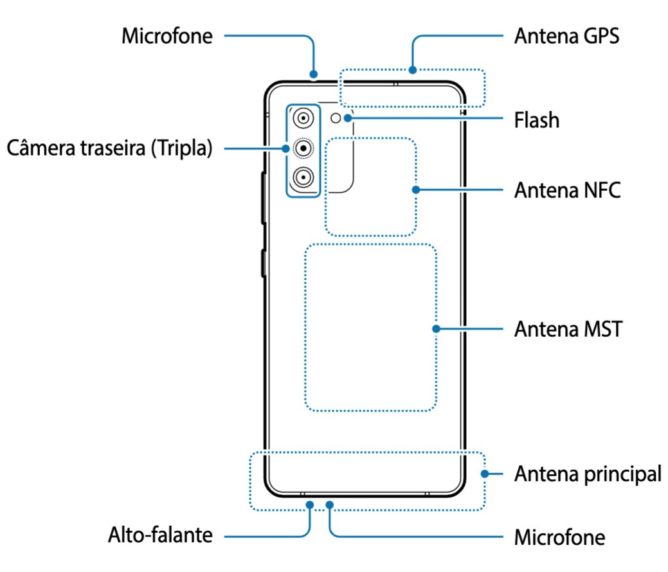 Q: Which processor will the Galaxy S10 Lite use?

A: Snapdragon 855, possibly in all regions.

A handful of leaks, including the Geekbench listing, have so far shared a somewhat similar list of hardware specifics, while also bringing back the Galaxy A91 reference. The S10 Lite is likely to be fueled by a Snapdragon 855 processor, coupled with 8GB of RAM and 128GB of expandable storage. It’s expected to come running Android 10-based One UI 2.0 — anything older would be amusing. This configuration is visibly better than that of the Note10 Lite, but it may manage to push back with a package complete with a feature-loaded stylus. 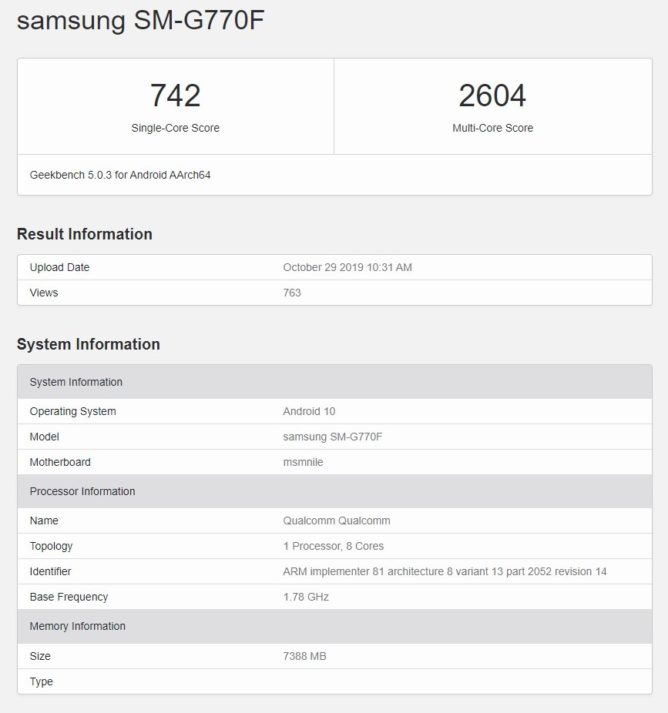 Besides confirming the S10 Lite name, an FCC document revealed Wi-Fi 6 support, while the handset was certified for Bluetooth 5.0 earlier this month. 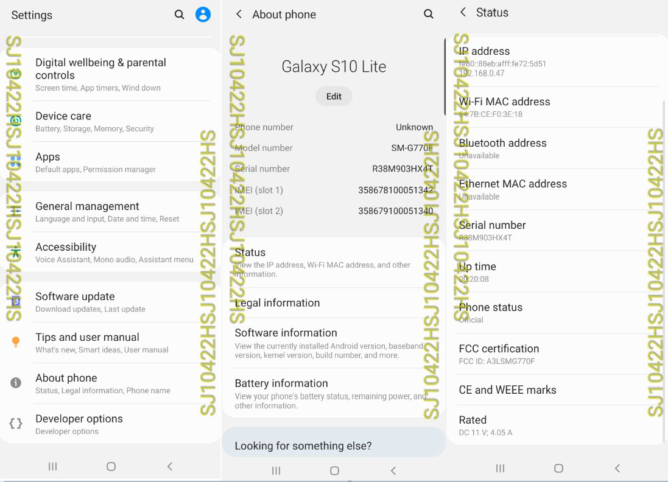 Q: How many cameras will the Galaxy S10 Lite have?

A: Three on the back, one on the front.

The last-shared render of the S10 Lite from OnLeaks reiterates the triple-camera setup that other leaks also specify, including the Portuguese user manual. Its primary camera will use a 48MP sensor together with something called TiltOIS, most likely for improved image/video stability. Noted leaker @UniverseIce believes that S10 Lite's OIS tech will be "unprecedented" and even trump current flagships. 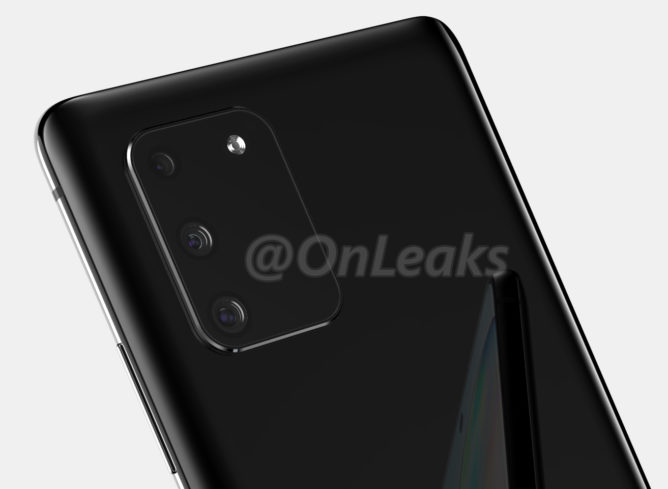 One of the other two sensors will have a 12MP resolution and an ultra-wide lens, while the third one will be, you guessed it, a macro lens sitting over a 5MP sensor. The older Galaxy A91 renders showed an additional sensor — possibly ToF — inside the large module, which the S10 Lite may omit. The selfie camera, on the flip side, may get a 32MP sensor.

Q: What will be Galaxy S10 Lite's battery size? What about fast charging?

Folks at SlashLeaks got their hands on a Brazilian certificate issued to the SM-G770F model, which mentioned the battery capacity of 4370mAh. It’s safe to assume that the number indicates the rated value Samsung usually shares with authorities, as pointed out by SamMobile, and the advertised figure could be 4500mAh. A separate report suggested that the phone may support 45W rapid charging last seen on the Note10+.

Q: When will Samsung announce the Galaxy S10 Lite?

A: Possibly around mid-January alongside the Note10 Lite.

Samsung may announce the S10 Lite a few weeks before it’s likely to refresh the flagship Galaxy S line at some point in February. Its listing on Samsung France’s website is indicative of an imminent launch that is said to happen alongside the Note10 Lite in January. The S10 Lite is also likely to join the Note10 Lite at the upcoming CES 2020, according to the same Korea Herald report.

Both WinFuture and the Slovakian retailer point at a price tag of €669 ($741). Outside Europe, you may get to see a lower price, and Samsung may also offer additional memory configurations for a better starting price, though none of that is confirmed yet.

The FCC certification is convincing evidence that both phones will indeed come to the US, although possibly not in the first rollout phase. These Lite phones from Samsung are targeting regions where the likes of OnePlus have a good hold — we’re talking India and parts of Europe here. Folks in the US may have to wait a little longer before they get to pick one of these.