Google Search was once merely a place that listed relevant websites depending on your queries, but these days, the engine provides many details right within the results, saving you a few taps and clicks. Google is constantly improving these so-called Knowledge Graph cards, and has now expanded movie and TV show cards with a watchlist feature.

Once the watchlist has rolled out to you, you'll see a new card with "Watched it?" and "Watchlist" buttons among those for trailers, stills, and ratings when you search for a film or TV show. Tap the former, and it'll turn green and change its label to "Watched," so you can quickly tell if you've already seen a movie when you're disciplined enough to hit that button every time you finish one. The "Watchlist" is also pretty self-explanatory — tapping it adds content to a watchlist. You'll find that collection among your other lists created across various Google services when you head to google.com/save. A catalogue of already watched movies isn't accessible, though. 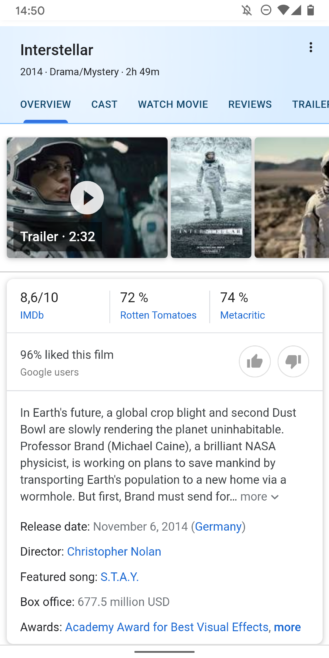 The feature is currently rolling out to mobile search in the browser and the Google app. It might take a while until it arrives on your phone, though judging from the number of reports on Reddit, it's already arriving on fairly many devices. Hopefully, Google will soon add an easily accessible list of watched content, too.