Four years after Cerberus made headlines when it invalidated free lifetime licenses, the device security app is back in the spotlight for the same questionable business practices. This time, it has begun to revoke paid lifetime licenses, partly without informing customers beforehand.

Back when the device recovery and locking app canceled the free lifetime subscriptions, it was quick to assure that "paid licenses are not affected," but it appears that this was just a temporary exemption. Over the last days, a few customers have taken to the Cerebus support forum to report that they've received emails telling them that their paid lifetime licenses were expiring soon. Others haven't even gotten those messages and only noticed that their access to the service suddenly had an expiration date in the Cerberus app settings. It's likely that many more people won't realize that their licenses are revoked until they need the service to find and lock their phones.

A tipster looped us in on the situation and offered us a reply from Cerberus, which answered his inquiry on how his lifetime license purchased in August 2011 could expire with the following message: 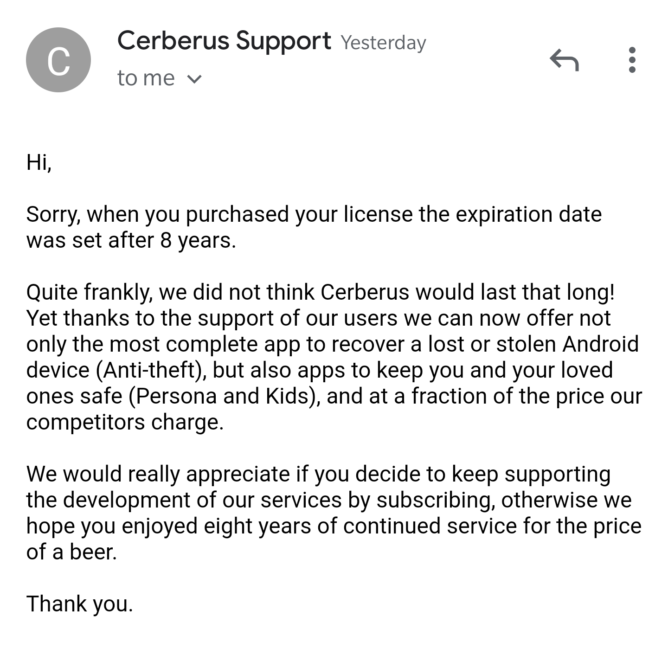 Cerberus claims that "lifetime licenses" aren't actually lasting a lifetime and would expire after eight years. However, in the publicly visible terms and conditions from October 2011, active when our tipster purchased the service, the company didn't bring up an expiration date at all (it did state the license is "revocable," though). Even if a date had been mentioned, something that expires after a set amount of time shouldn't qualify as a "lifetime license," and hiding an expiration date in the ToS would be deceptive at best.

Looking at the Android Market app listing from November 2011, Cerberus even advertised the application as coming with "no monthly fees, just a one-time payment" (Swedish, translated by Google):

This is a free trial for one week, then you can buy a lifetime license for a low price (€ 2.99) inside the application: no monthly or annual fees, just a one-time payment. The license is linked to your Cerberus account, and if you have more devices you can link all (up to 5) to the same account.

Further, the company basically shames its customers into thinking they paid too little (even though they paid the price set by Cerberus!), and now it's their job to "keep supporting the development" of the service by subscribing again. Cerberus is deflecting its own bad business decisions to its license holders.

Coming hand-in-hand with the overall passive-aggressive tone of the email, there's also the bogus excuse of "we did not think Cerberus would last that long" — as though it was the customers' fault that the company miscalculated its own success. It implies that Cerberus didn't believe in its product and thought it wouldn't be able to provide the service for a lifetime in the first place, so it didn't even try charging a proper price. 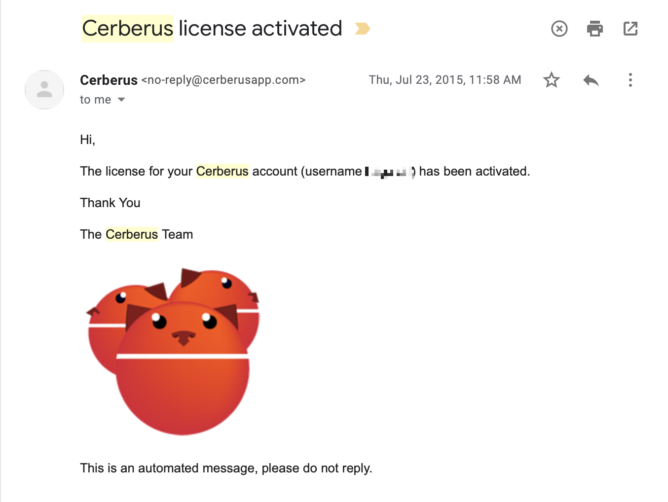 There is no mention of an expiration date in the lifetime license activation email.

The expiration issue only seems to affect the oldest accounts currently turning eight. When one of our team members checked for an expiration date on his license purchased in 2015, he couldn't find one — so far. This shows that Cerberus isn't transparent about this eight-year policy at all.

Sure, app development costs tons of money and lifetime subscriptions aren't helpful when your service involves servers and other running costs, but revoking paid licenses without notice and outright lying about a previously uncommunicated expiration date is not the way to go. That's still true even if eight years of service "for the price of a beer" is a pretty good deal.

If Cerberus wants to see positive examples on how to communicate with customers in cases like these, it should look no further than Enpass or 5217.

It turns out that back when Cerberus deactivated free lifetime licenses, it actually recommended those customers to switch to the paid lifetime subscription, saying, "We never made, and we will never make any retroactive changes to paid licenses, so if you buy the license now it will not expire." We know now that the company didn't keep that promise. Here's the full text: 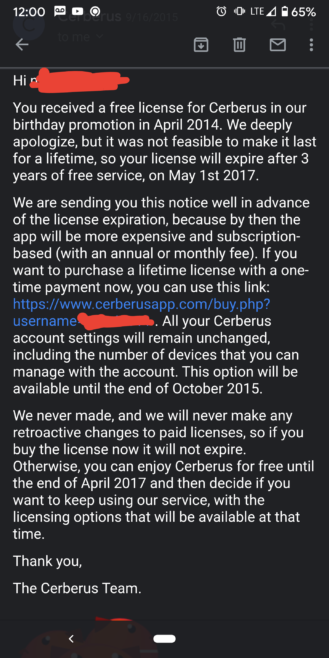 Another user (thanks, Matto Godoy!) received a similarly worded email when Cerberus announced its Persona service: 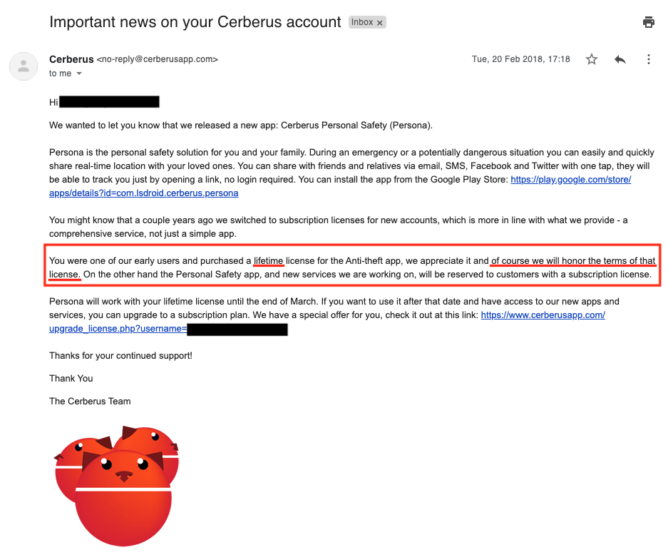 Additionally, it looks like that eight-year expiration date is pretty arbitrary. Many affected people have reached out to us and told us that their licenses are already expiring despite being much younger. Some have purchased their lifetime subscriptions in 2012, 2013, or even 2016.

@ManuelVonau @ArtemR looks like @cerberusapp has started sending out expiration messages for licences that are less than 8 years old now pic.twitter.com/ImiVHtPL9S

It looks like Cerberus is trying hard to ignore its disgruntled customers by shutting down threads in its support forum that complain about the expiring lifetime licenses. Indeed, the thread we linked to in the original story is gone. Instead of owning up to its decision, the company tries its best to ignore the fallout.