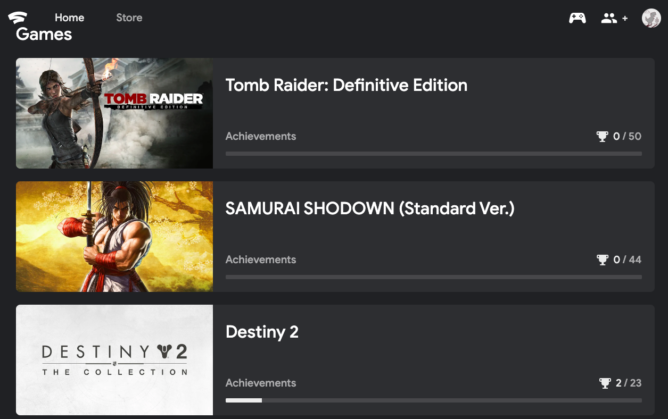 Achievements on Stadia work just like they do on any other platform. When you complete specific goals in games, you'll see a new notification pop up informing you of what you've accomplished. As Google promised, achievements have been counted in the background since Stadia's launch, so you might have collected a few already. You can view them on Stadia.com by pressing tab and shift, clicking on your avatar, and heading to Achievements. On Chromecast, hit the Stadia button, and follow the same steps as for the web. You can also see others' achievements when you visit their profiles.

🏆Achievements for @GoogleStadia are now live on Chromecast and web. Great work by the team to crank this out so quickly!

Full details at https://t.co/0KJzSOSEhF. Anyone gotten 29/29 on GYLT yet? pic.twitter.com/8WSQo0ztvd

The feature has yet to arrive in the Stadia app, though. Still, the service is slowly but surely shaping up to become what it was supposed to be from the beginning. Let's hope the team can keep up the pace and will soon add brand-new functions once it has finished its backlog.