Some smart home gadgets seem like solutions in search of a problem, shoehorning IoT connectivity into something that was working just fine without it — unless you're that one guy who really needs to talk to Alexa while playing the keyboard. But on the opposite end of the spectrum, you've got the smart lock, an early leader into the world of the connected home that managed to reinvent a "dumb" product with some genuinely useful new functionality.

There's no shortage of smart lock options out there, running the gamut from fully integrated replacements to add-ons that quickly attach to existing locks. Today I'm taking a look at the Encode Smart WiFi Deadbolt from Schlage, one of the biggest names in residential security. With hubless Wi-Fi connectivity, the promise of easy installation, and a solid, robust design, is this the smart lock to pick up?

Schlage makes the Encode available in two styles, each with light and dark color options: the simple Century (pictured here, in silver) or the more ornate Camelot trim. Functionality is the same regardless of the look you choose. The outside-facing panel offers a 0-9 keypad with enter and quick-lock buttons. There's not a lot of extra feedback, but you do get status LEDs to indicate WiFi connectivity, confirm button presses, and indicate battery level. The whole business is quite handsome, and feels as robust as you'd expect from an exterior lock. 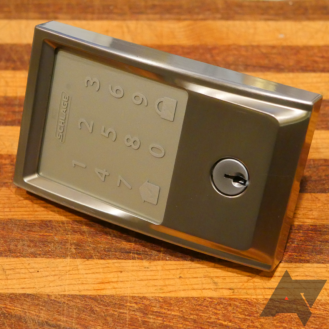 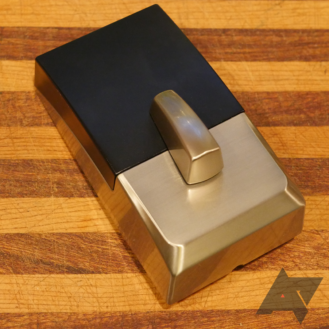 The interior lock element is much more utilitarian, with a large thumbturn below the lock's battery housing. The case here easily slides off to reveal a battery caddy: 4 AAs should power the unit for about half a year. Honestly, I don't love how the black plastic contrasts with the silvery nickel, and might recommend going with the matte black lock if you feel the same. 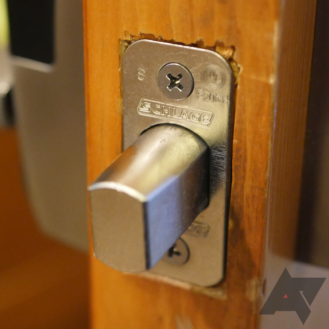 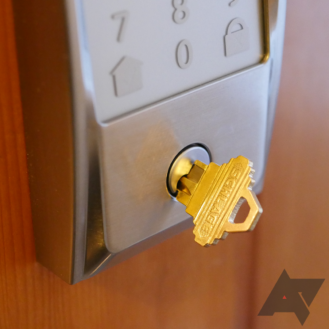 Full replacement lock hardware comes with the Encode including a new bolt (left); a physical key acts as a reliable fail-safe (right).

The Schlage Encode comes as a complete kit ready to fully replace an existing stand-alone cylinder deadbolt. That means that in addition to the front keypad and rear thumbturn panel you also get a new lock bolt, as well as a reinforced strikeplate for the doorframe. 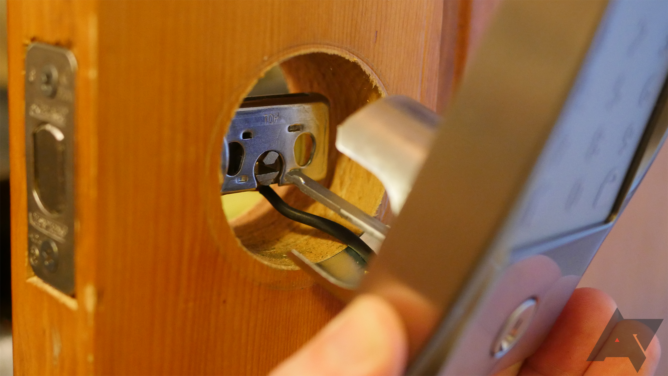 The lock fits right where your existing deadbolt went.

Installation is incredibly straightforward, and while it may seem a little daunting at first, it's really no more complicated than turning a few screws. My existing deadbolt housing came apart with just two screws, and another two to remove the old bolt. Popping in the new Schlage bolt takes just seconds, and it's adjustable to accommodate different door layouts. 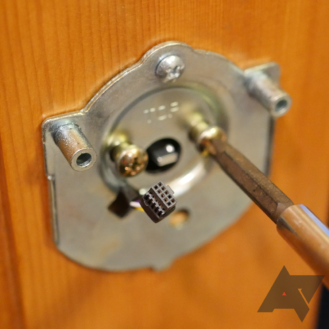 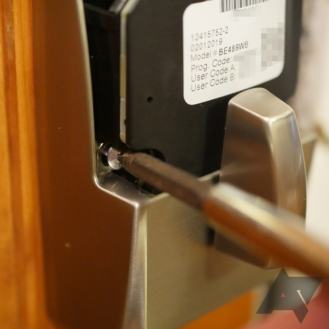 The front keypad easily aligns with the bolt, and after routing its cable through, securely attaches to a mounting plate. Then it's just a matter of connecting that cable to the rear panel and installing it with another pair of screws. From start to finish, I had the new lock on my door in not even ten minutes. 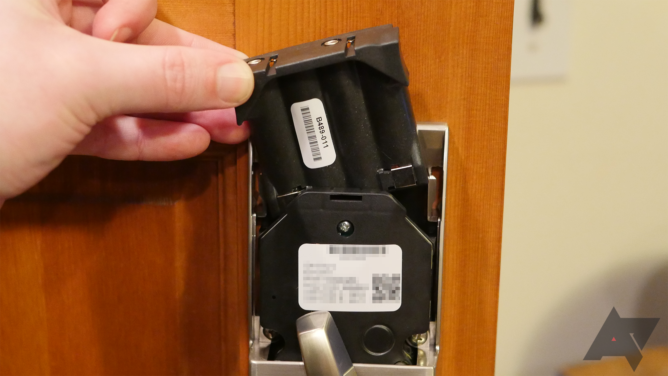 Initial pairing is quite painless, helped along with the assistance of Bluetooth LE and a scannable QR code, before the app finally shares Wi-Fi credentials and brings the lock fully online. From there you can give it a name, and start setting up access codes.

The lock comes with a couple default codes printed on a sticker within the battery compartment in case you ever do a factory reset, but for now you're going to want some codes of your own. You can choose from 4, 6, or 8 digits, but be sure you go with a length you're comfortable with, as all other users will need to have codes with the same count. Up to 100 codes can be assigned.

For each of these, you can set restrictions on their use, whether recurring or just covering one time window. The app also supports custom per-code notification alerts, letting you opt to get a heads-up when the kids return home from school or your pet-sitter drops by.

In addition to unlocking with codes, the Encode also supports app-based unlocks. These "virtual keys" can be sent to users who then download the Schlage app for themselves. While I think that codes are a little easier to work with in general, using the app definitely has its moments. There's nothing like unlocking your door right from your car, before your arms are full of groceries you're trying to bring in — no more fumbling for keys.

While the app's functional, a few annoying issues do stick out at me. For one, it can be a little unintuitive just how often you have to hit "save" when entering user data; you can't just create a new code all at once, and have to separately save any changes to the schedule for when it should be active. And while the app tends to have very detailed logs of who used the lock, including both when and how, it can't differentiate between an internal thumbturn and using an external key — a minor issue, perhaps, but one that stands out because of how detailed all other logs entries are.

The Schlage Encode integrates with existing smart home systems using either the Google Assistant or Alexa, including Key by Amazon support for deliveries. I tried out the Assistant connection, and while locking works just fine, you're out of luck if you want to unlock with voice. 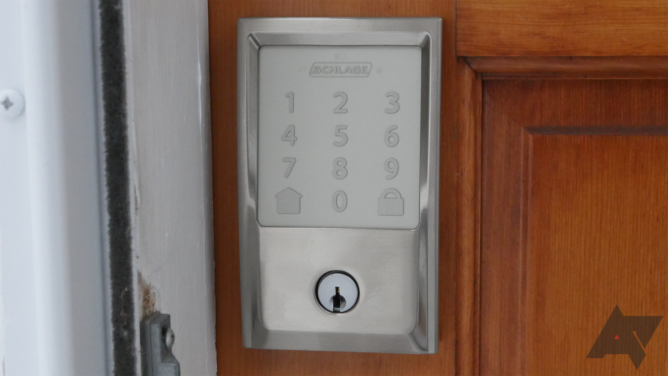 Yes. Getting locked out of the house, copying keys for guests, keeping track of which handymen or cleaners have keys — none of these ever have to be problems, ever again. And while that's going to be true with most any smart lock, the Schlage Encode is just really nicely executed. The hardware is all very high quality, and while I wish the app were slightly less rough around the edges, it largely accomplishes what it sets out to do.

Depending on the color and trim style, Schlage Encode pricing varies, but you'll generally pay between $200 and $250. Particularly on the bottom end of that range, that's pretty competitive, especially considering the hubless Wi-Fi connectivity here and feature set. Sure, you can go cheaper, but there's no reason to feel bad about paying the asking price for a smart lock package that comes together this well.