Graphene has been dangled in front of us for over a decade as a new, magical material capable of solving all our technical problems, while steadfastly staying out of consumer products. It's a materials science fact with the mythos of science fiction, but it's finally percolating down into stuff you can actually buy, like this portable charger/battery. Made by a Chinese company called Elecjet, the Apollo Max promises 37Wh (10,000mAh) of capacity, 100W charging, 60W discharging, and a 19 minute recharge time. Unfortunately, that last claim is just science fiction.

Whether you call them batteries or portable chargers, they are bricks: This is a brick. The top and bottom are a soft-finish plastic, with an almost fabric-like texture embedded into it, terminated by a dark gray plastic bumper. All the ports (1x USB Type-C, 1x USB Type-A) are on a single short side together with a seven segment display to indicate the remaining charge. A button on the side activates the screen.

Two green lightning bolt lights indicate when it's using a PPO over 5V (charging or discharging). Plug in most non-PD sources like an older or lower-power phone, and they won't light up. That lets you know at a glance how much power something might be pulling, though it leaves a wide potential range. 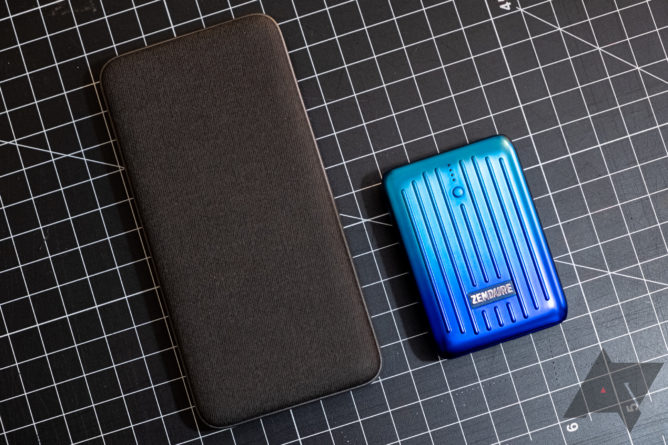 These two batteries are actually similar in capacity, but not very similar in size. (Or output, the smaller one only spits 18W.)

It's big for a battery of this capacity, closer to the size you'd expect in a 20,000mAh/74Wh battery. Part of that could be a result of the large input (100W) and output (60W) values supported, or it could have something to do with the snazzy new graphene cells used in the battery.

It's easy for a company to say that something has graphene in it, but I repeatedly and aggressively badgered Elecjet for a better explanation of precisely how it's used in the Apollo Max — otherwise who's to argue against some ridiculous explanation like a bit of graphene-mixed paint used for a single part. There was a language barrier, but based on the explanation we were ultimately provided, this sounds like the real deal:

"The positive pole of cell is added with graphene composite to make the structure more stable. It can remain ultra-high lifespan during large-current fast charging.
The negative pole of cell is coated with graphene material to increase electrical conductivity. So that the internal resistance could be reduced. As a result, Apollo Max would not get overheated at super-high current (over 10C multiplying power charging)."

Graphene is also allegedly used as a cooling mechanism inside the battery, and the company claims the lifespan of the cells inside should be around 3x longer — though clearly we didn't have the time to test that.

The only two issues I have with the physical design are the size and the USB Type-C port. This is a pretty large battery for its capacity, and if size is a concern, you can get physically smaller portable chargers of comparable (or larger) capacity, though power output and graphene geek cred may vary. But, by far the more annoying issue was how loose the USB-C port on the model we tested was. None of my cables liked to stay seated, which meant some of the tests further below had to be performed several times as things came loose during testing. For any battery, let alone one of this price, that's not really acceptable. 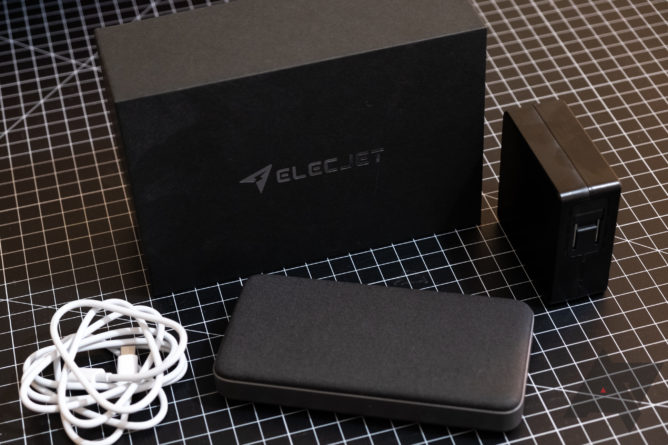 The presumably pre-production version and packaging we got was the "Apollo Max Pro Pack" from the current Indiegogo campaign, which includes a USB Type-C cable and a massive, generic-looking 100W charging brick. Standalone versions will likely come with other stuff. 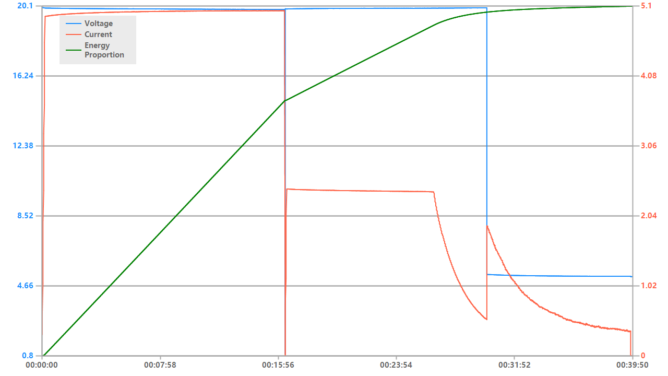 That first dip in current at around the 16/17 minute mark is when the battery reported itself at 100%, at a charged capacity of just 26Wh, far below the rated 37Wh. It continued to charge past "100%" for over twenty minutes at a reduced rate.

After charging at 100W to a capacity of around 70% or ~26-33Wh in 16-19 minutes (a range measured across four tests), the Apollo Max's built-in capacity indicator reports itself as full — in all cases, below the claimed 37Wh capacity. It continued to charge past that point at a reduced rate for another 15 minutes or so until it reached its full 37Wh (37.2Wh, in our tests) capacity.

Based on these results, Elecjet's advertised "19 minute" recharge time isn't true. The battery will report a 100% charge after ~19 minutes, but at that point, it has only charged to around 70% of its full, advertised 37Wh capacity. It will continue to charge for another 15-20 minutes after that at a reduced rate until it reaches its actual full capacity.

Looks impressive, too bad it's wrong.

Discharging is even more inconsistent. Sometimes the indicator will count down immediately from 100% regardless of whether it's been charged to 26Wh or 37Wh, other times it will stay at 100% for the first ~4Wh of discharge and continue discharging for a solid Wh or two after it reaches "0%." In short, the indicator on the Apollo Max itself can't be trusted at all.

It does run surprisingly cool when discharging, just barely warm to the touch even as it spits 60W continuously. When charging, it gets a bit toastier near the USB Type-C port (especially at 100W), but that's to be expected. The side with the battery cells themselves stays cool the whole time.

There's also an erroneous, extra PDO (configurable output option) available to some of my testing devices, which reports itself as an odd, non-integer voltage value that's absurdly high or even negative on some of my testers, and which is advertised as only providing around 40-800mA. Trying to trigger it fails in all my tests. I've never seen a bunk PDO object like this from a PD-compatible power supply before, and I don't know what it means. It could be a misconfigured PPS PDO (programmable power supply, an option in the PD 3.0 spec that allows for dynamic voltage used by the Note10+), as the battery does advertise PPS compatibility.

On that note, testing the device with an ostensibly PPS-compatible Galaxy Note10+ saw odd results. While it did provide adaptive voltage a'la PPS according to my AVHzY tester, it never exceeded around 35W of power output at peak, though the Note10+ claims to support 45W over PPS. Assuming this battery does actually support PPS, this could be an issue with the Note10+ or the tester used in my measurements, which could be interfering in some way with the power negotiation.

In more anecdotal testing, regardless of that slightly concerning PDO, the battery did play nicely with all our devices when charging them via USB-C. The Pixelbook had no issues drawing power from it immediately, it worked with all phones tested (including the Pixel 4 and recent Galaxy flagships) as well as the Surface Go and 2017 13" Macbook Pro, supplying up to the maximum supported power levels in all cases. Low-power devices like headphones and wearables also sipped juice just fine. Even the Nintendo Switch was able to pull power. We noted no odd behavior in our tests outside the Note10+ PPS.

No, I wouldn't recommend the Apollo Max.

It's cool that it's powered by graphene in a sort of abstract, academic way, but it's overpriced, too big for the capacity, the Type-C port was too loose, and it doesn't hit the advertised "19 minute" recharge time — in fact, it bends over backward to lie about it. For just $60, you can get a slightly larger portable charger that's got twice the capacity, better output at 100W, and only marginally worse rated input (87W) over at Amazon. In comparison, the "early bird" price for the Apollo Max is $129 at its current Indiegogo campaign, and that's set to rise to $199 later. Any way you cut it, this isn't exactly a great value. You can get our Editors' Choice award-winning SuperTank for that much, and that battery does 100W symmetrical with 27,000mah/99.9Wh of capacity, and it's also just a little larger in volume than the Apollo Max (different shape, though). 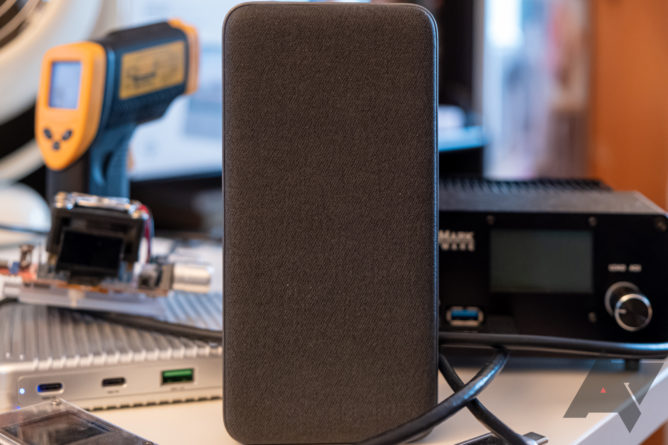 If, for some reason, you need this precise mix of features — smallish overall capacity, mid-high output, (potentially buggy) PPS support, and high input — and can't compromise about physical size, then the Apollo Max could satisfy, though you'll pay more than it's probably worth to get it. If you do, you will at least enjoy generally universal device compatibility. It even works with the Note10+'s PPS to fast charge, though not at the full 45W speeds Samsung claims the device supports.

If you do get one, make sure to also pick up a charger that can spit 100W out to top-up the battery when the time comes.

At the time of writing, the Apollo Max isn't commercially available. Pre-orders are only occurring via the company's ongoing crowdfunding project. Prices are currently at a $129 "super early bird" price, set later to rise to $200. Right now, that's the only way to pick one up. That is, assuming it ships. All the usual crowdfunding warnings apply.

Two-factor authentication should be mandatory for all of your accounts, and it's time for ...