Although Taiwan wasn't indicated on the map of Assistant's expansion or in the list of countries Google promised support for before the end of the year, the Google Pixel 3 is the first Pixel to be officially available in Taiwan. Since a major appeal of its experience is Assistant, the virtual helper had to come to the country too.

Google Assistant is starting to roll out, on phones and tablets, to devices set to use the Chinese (Traditional, Taiwan) language. You need to have Android 5.0 at least, and more than 1GB of memory, and your phone has to be set to the language. When you tap and hold on the home button, you'll get the Google Assistant onboarding instead of Screen Search. The rollout is happening slowly though, so you may not see it, or you could also try triggering it by installing the Assistant app from the Play Store. If you have an iPhone, you need to wait for the app to show up on the App Store. 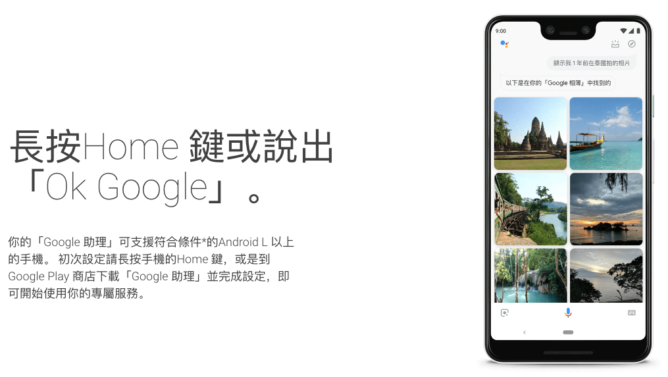 Media partners in Taiwan include YouTube, Spotify, Netflix, and MyMusic. Assistant can also help with navigation, common calculations and conversions, various questions, translations, photos, and more. Actions on Google have also added support for the language, so developers will be able to make their own integrations.

This marks the first time Assistant can speak Chinese, even if it's only one variant of the language, but we hope it paves the way for more. Another limitation is that it's only available on phones, so you'll need to wait longer if you want it on your Home speakers or Wear OS watches.

Now on smart speakers too

The Nest Mini recently launched in Taiwan and brought along Chinese support to Google's Assistant speakers. Whether you live in the country or not, you can choose this to be the primary language for your Assistant on both phones and speakers now.

Google is working on Tasks integration in Calendar app