Samsung has clarified that it has not, in fact, sold 1 million Galaxy Folds, in a statement given to Korea's Yonhap News Agency. Samsung declined to comment on the actual number of units sold, only to say it was not over a million.

Samsung would not even state if estimates of 500,000 units were closer to an accurate figure, perhaps suggesting the real number could even be below analyst expectations. This wouldn't be a surprise, as given the massive delay caused by the phone's faulty design, it's very possible Samsung hasn't even been selling the Fold long enough to reach that number.

As to why a Samsung executive claimed the 1 million figure in the first place, the official line is that Sohn Young may have confused the company's initial internal sales target, which apparently was 1 million units before the phone was delayed, for an actual sales figure.

According to Samsung Electronics President Sohn Young, who participated at the TechCrunch Disrupt event in Berlin yesterday, there are over one million Galaxy Fold smartphones out there in the wild — double the initial sales estimate made in October of 500,000 units. Despite costing nearly $2,000 and requiring extreme care during use, a sizable number of people have embraced the 7.3-inch folding screen device, making Samsung quite happy and getting it closer to realizing its foldable goals for 2020.

It would be an understatement to say that the Fold had a bumpy start. After several early reviewers had their test devices fail, customer preorders were abruptly canceled and the launch date was delayed by several months while the phone underwent a major hardware revision. The fiasco even prompted Samsung CEO DJ Koh to say, "It was embarrassing. I pushed it through before it was ready." 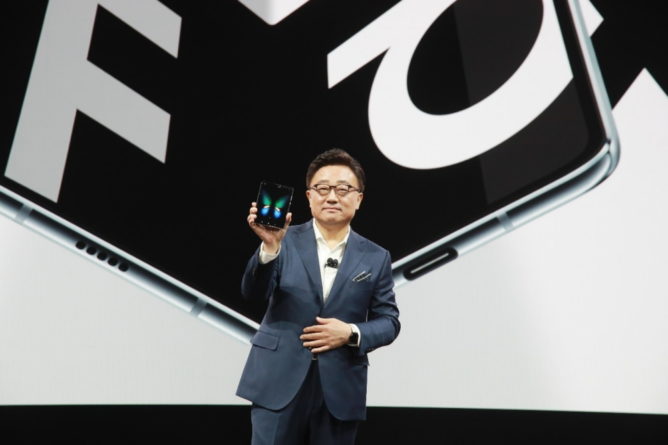 When the Galaxy Fold relaunched in September, it fared better during use, and it even came with a $149 screen replacement service to assuage people's fear of premature breakdown.

One million sales is like a drop in the bucket when you compare it to the tens of millions of other Galaxy devices that Samsung moves every quarter. But for a smartphone this expensive and novel that underwent so much negative publicity early in its lifecycle, it's still quite a feat.

Samsung's ambition for foldable devices doesn't stop with the Galaxy Fold. There have been persistent rumors of a smaller and cheaper Galaxy Fold being released next year, along with others with a different type of folding mechanism. If media reports about Samsung wanting to sell 6 million foldable devices in 2020 are correct, then the Korean giant is off to a good start.