If you missed the Sharp 4K Roku TV sale from Best Buy yesterday, then you’re in luck. Today only, the company is running a similar promotion for a 65” TCL 4K LED Roku TV — and it’s arguably a better deal. Not only do you get a sizable $230 discount, but you also get a free Nest Mini and two months of Sling TV at 40% off.

Usually sold for $730, the 65" TCL TV is currently going for the price of $500, a $230 discount. The television comes equipped with Roku functionality, meaning viewers have access to built-in apps such as Netflix, Hulu, Prime Video, and more. The TV also features Dolby Vision HDR, allowing you to watch 4K HDR-compatible content. With three HDMI ports, a USB port, composite video input, and digital optical audio output, users won’t have to worry about running out of places to hook up their gadgets. 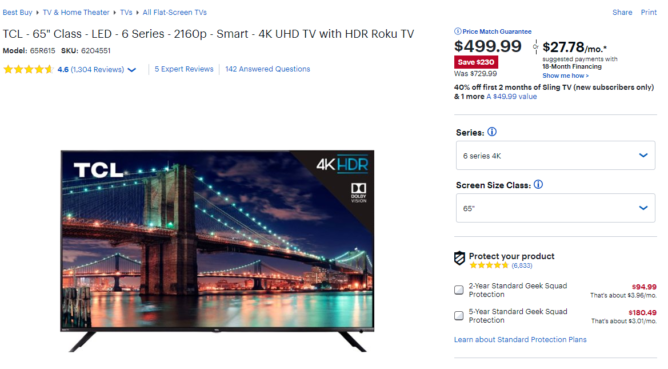 Also included in the deal is a Nest Mini, valued at $49.99, and the option to subscribe to Sling TV with a 40% discount for the first two months (new subscribers only), both items which will appear in your cart at checkout.

Best Buy is only running the deal until the end of the day, so if you’re interested in picking up a new TV, be sure to check out this promotion before it ends.