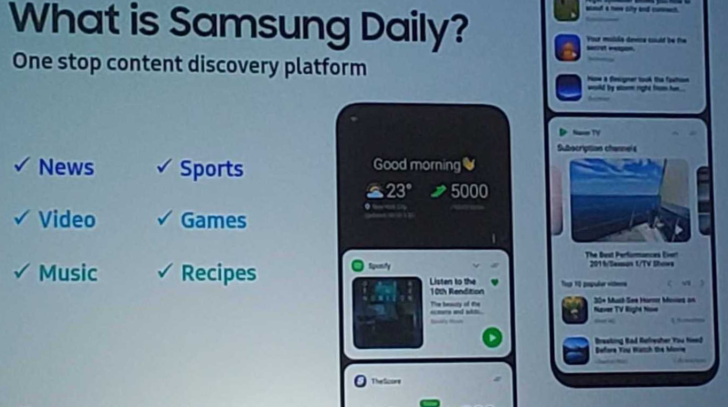 The company broke the news during its annual developer conference in San Jose, revealing Samsung Daily will replace Bixby Home on its newest devices, ranging from the Galaxy S8 to the Note10. The new app isn't much different from the former, as it's still based on cards showing news, sports, videos, games, music, and even recipes. The company says it's improved the interface for better readability and also made it easier for developers to integrate their content with Samsung Daily.

The app should start rolling out in November and would automatically replace Bixby Home. Even though the name change might suggest a whole new project, it doesn't seem to be much different from what's already available today, but we'll know more in the coming weeks.

Samsung Daily not ready yet

Samsung introduced its Bixby Home replacement, Samsung Daily, with One UI 2.0 betas and then stable versions as they began rolling out. It seems users weren't too enthused about the change and reception for Daily hasn't been super positive, so Samsung has released a notice explaining that Daily is still in beta and it's still taking feedback to improve the service. It also highlighted the steps you can take to uninstall Daily and get back Bixby Home if you prefer that.

From Samsung Daily to Samsung Free

After finally rolling out Samsung Daily across its devices in 2020, the company is now making another shift in its homescreen experience. A new service will replace Daily, called Samsung Free, and will provide a tabbed interface with better formatted news and games. Some cards and content you've gotten used to seeing in Daily will be removed, but it's not clear which apps and services are affected. 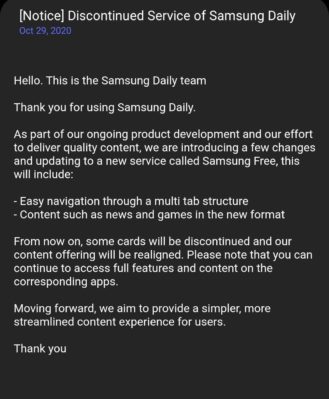 Here's a video showing off what Samsung Free is expected to look like:

Spotify is gifting more Google Home Minis, this time to all subscribers (Update: Offer is back, ...