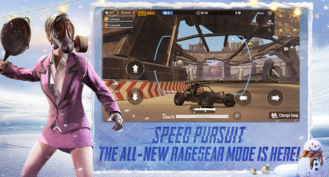 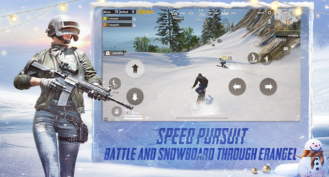 As expected, this month's patch for PUBG Mobile brings along a bunch of new features and changes, and luckily the patch notes are live on the official PUBG Mobile website, so we can pore through the essential bits. The most notable addition is the new EvoGround mode called RageGear, where players will be divided into two teams to be randomly assigned as a driver or shooter. The goal of this mode is to destroy your opponent's vehicle before they destroy yours. Besides the new EvoGround mode, there are also a few new Classic modes in the mix, such as Snow Paradise and two Healing modes. Firearms have also been rebalanced for Classic mode, and there's also a new backpack ornament, plus a new spectator tier and friendly fire restrictions. Of course, if you'd like to read the full Play Store changelog, I've pasted it below.

WHAT'S NEW
#1 Battle Royale mobile game! Winter Festival & RageGear!
What’s New
The new Snow Paradise mode
When playing Erangel in Classic mode, players have a chance to enter Snow Paradise,
where they can ride cable cars and try out freestyle snowboarding!
High Speed Combat
In teams of 2, players can enjoy high-speed combat while driving around!
Perspective Switching
Players can now switch from TPP to FPP while in Classic mode, Arcade mode and the Training Grounds.

As you can see, the 0.16.0 patch for PUBG Mobile brings along a solid list of changes. While it's no surprise to see these types of modifications and updates released on a monthly schedule, it's always nice to know that there will be new things to do in PUBG Mobile every month. Fittingly, the new Classic Snow Paradise mode is fitting for the holiday season, and the new EvoGround mode should supply hours of fun as players race around in vehicles trying to take one another out. So if you'd like to explore the new 0.16.0 patch, you can do so today by installing PUBG Mobile from the Play Store widget linked below.

New EvoGround mode, winter-themed content and more drop in to PUBG MOBILE on iOS and Android

The version 0.16.0 content update announcement arrives after PUBG MOBILE earned the 2019 Google Play “Users Choice” and “Best Competitive”, also the AppStore “Top Games of 2019”. PUBG MOBILE has now won the best game of the year for two consecutive years. The update is also announced with the new game icon presenting the new logo of Tencent Games, which represents the spirit of “Spark More”.

· RageGear Mode – In this all-new EvoGround mode, players are divided into two factions and are assigned to be either the driver or shooter of a vehicle. Each vehicle is mounted with a powerful weapon including the Gatling, Shotgun, or RPG. The shooter fight with special weapons which are the Gatling, RPG, Grenade Launcher and the M249.

o RageGear PickUp: Players must collect a certain number of Point Crates first to win, but will lose all Crates if their vehicle is destroyed

· Snow Paradise – When queueing for Erangel in Classic mode, players have a chance to enter Snow Paradise, where the Spawn Island is covered in white frost. Players also have the chance to ride cable car lifts and snowboards once they drop into the map.

· Loadouts – A new loadout screen has been added to Team Death Match Mode for players to edit and customize their starting weapons. Every firearm can be unlocked at a different Evo Level, and all offer mastery levels for additional attachments

· Firearm Balances – In Classic mode, multiple weapons have been adjusted to develop more balanced gameplay, including:

o Crossbow: Damage to torso and limbs increased 40% and 20%, respectively

· Collaboration content with Angry Birds – Ten years since the birth of the Angry Birds brand, players have the chance to unlock crossover items and enjoy a mini-game in Spawn Island throwing Angry Birds bombs. Rewards can be won by completing missions in the Angry Birds Adventure event.