If you haven't already bought a smart display and you aren't skipping out over privacy concerns, you really should pick one up. They're a lot more than just a "digital photo frame," providing all the same utility as a smart speaker, plus piles of extra interaction from a touchscreen. But you might want to be careful about which smart display you buy. Lenovo's newest Smart Display 7 might have an attractive design, but it's got piles of little problems that might make the identically-priced (and often discounted) Nest Hub a better choice. Sadly, it doesn't quite live up to the high standards set by Lenovo's previous models, either. 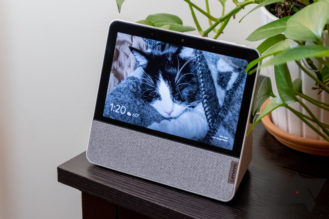 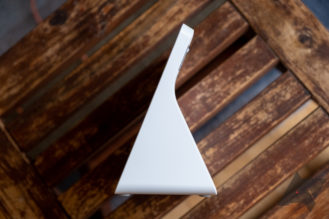 I find the industrial design on Lenovo's latest displays pretty attractive. It's a simple, tall, obtuse-angled wedge, with the screen set in the top and the front-facing stereo speakers together below it. Though I'll miss the bamboo back the old 10" display had, the matte white plastic — which covers the back, sides, top, and bottom — is similar to what's used on the older 8" and 10" displays. 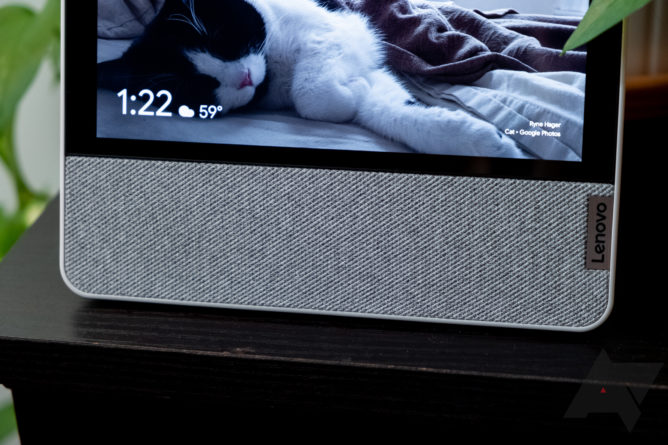 The knit of the heathered gray fabric covering the speakers is nearly identical to that wrapped around the Lenovo Smart Clock, and reminds me of the Home and Nest Minis: It has a similar weave and texture, though it doesn't seem quite so durable. This is pretty soft to the touch, while the Home/Nest Minis are harder and more abrasive. Coupled with the light color, I'm a little worried about staining it if it's used somewhere like the kitchen or bathroom. 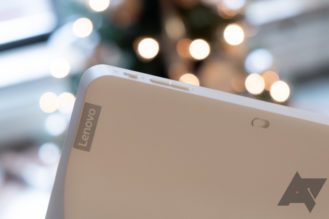 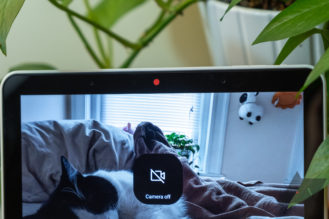 Up top, you've got volume controls and a microphone mute switch to one side. Dead center in the top back is a camera privacy switch, which slides a bright red cover over the camera beneath the display.

The big screen has good color and decent resolution given the distance it'll be used at, but it can be frustrating. Like Google's first-party Hubs, the Smart Display 7 has an Ambient EQ-like RGB light sensor that gives the display dynamic color temperature adjustment, and it's really touchy. Lenovo might need to add some extra hysteresis on whatever processing it performs, because the white point was constantly and drastically changing every few seconds using it on my desk. If you set its ambient mode to use a clock face with white elements, the frequent changes were substantial enough to be distracting out of the corner of my eye, especially since there weren't any actual changes to the lighting in my environment. 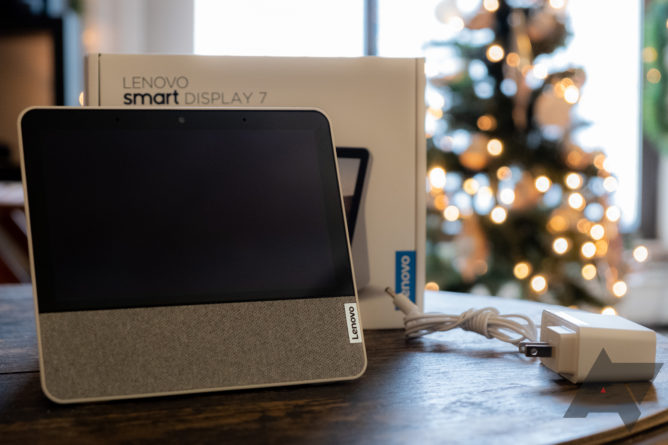 The Smart Display 7 takes power over a barrel connector, supplied by the beefy included power adapter, and that's basically all you get in the box outside the usual plastic wrapping and warranty cards.

The setup process is the same as all the other Assistant-powered smart displays and speakers, if you're familiar with that. If you aren't, it's pretty straightforward: Fire up the Home app, get to the "add device" setup process, and just follow the steps. Google walks you through the whole thing, and it's a linear path. You might have a few more options if you've never set up a device before, like configuring the Assistant to recognize your voice and pairing services, but it's still quite simple.

Although the setup process ultimately threw me an error at the very end, the Smart Display 7 was working fine and connected to my network as it should be.

The sound quality on the Smart Display 7 was around what you'd expect for something at this price and size. It's not going to thump anywhere near as much as a bigger dedicated smart speaker, but at higher volume levels bass is surprisingly adequate. Go below a setting of around 4-5, though, and all you'll hear are mids and highs. It can also get louder than you'd expect if you really crank it up. Overall sound quality is a little hollow, but comparable to what I remember of the smaller Nest Hub. 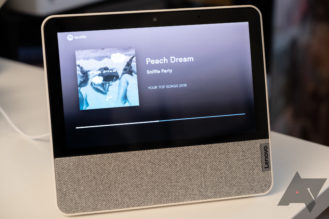 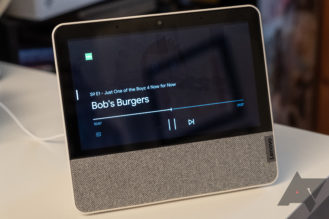 Music and streaming work fine, outside Netflix — this could be a tiny, cord-cutting kitchen TV, if you needed it to be.

The screen's quality is good enough to serve duty as a digital photo frame, feeding content from Google Photos to the display at idle. Color calibration (outside the RGB sensor's adaptive issues) is good, and it gets both bright and dim enough for most indoor environments.

Performance watching actual video — like on YouTube, Twitch, or Hulu — was fine, though the ongoing Netflix omission on smart displays makes less sense with every passing day. But swiping around the various menus, lists, and instructional content on the display itself was pretty frustrating. Sometimes it's pretty smooth, but most of the time it drops frames and stutters as you scroll or swipe between stuff. That's not a problem that is exclusive to this display, my older 10" Lenovo smart display developed similar issues not too long after launch, but it's worse here.

Jank and dropped frames in isolation might seem like a minor issue, but the whole point of a smart display is the display, it's the value-add you get on top of the base smart speaker functionality. Paired with the RGB sensor's wild results, I find the screen on the Smart Display 7 pretty disappointing. By themselves, these issues might be enough to push many to Google's first-party Nest Hub — though keep in mind that doesn't have a camera, if you want one.

Display timeout is also inconsistent. Sometimes it will keep controls on the screen for up to a minute or so; other times they're gone in mere seconds. Whatever setting controls this in the Home app, I can't find it, but it's pretty annoying. 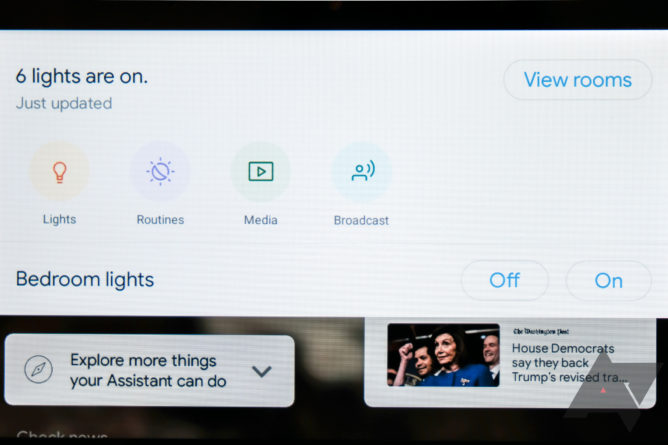 Smart home functionality is standard for Smart Displays outside the security camera feature Google's latest Nest Hub Max has. Though this has a built-in camera for Duo video calls, it doesn't serve double-duty as an in-home security camera. It also doesn't support Face Match for per-user customized content. But when it comes to managing your home lights and cameras, you get the same easy swipe-down controls that offer granular options for local devices. Personally, I eschew in-home cameras out of privacy concerns and a tendency to dance about naked, but media, light, and outlet controls work perfectly, down to temperature settings and individual devices.

If you're kitted out with Assistant-compatible smart home gadgets like Nest cameras and thermostats, Wyze lights, or Wemo outlets, a smart display is an easy recommendation.

No. Ultimately, though I like the Smart Display 7, I don't think it's the best choice for a 7" Assistant-powered smart display. Google's Nest Hub is the same MSRP (often discounted below $80) and has fewer issues when it comes to display performance. Although the Nest Hub doesn't come with a camera, it did pick up ultrasound-based presence sensing recently, which Lenovo's display lacks. As a first-party display, the Nest Hub is also more likely to get new features and updates from Google in a more timely manner. 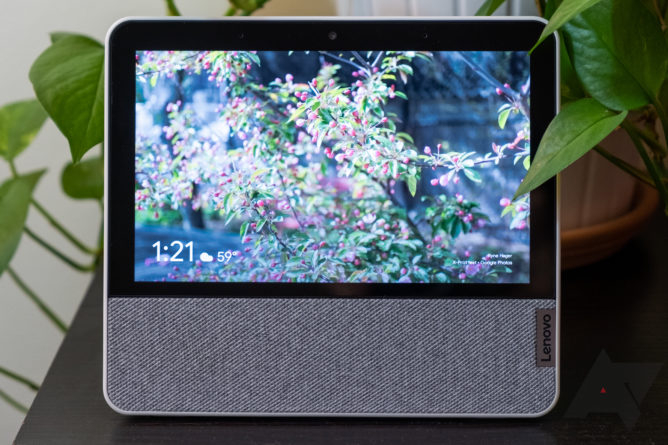 If you absolutely need a 7" display with a camera, Lenovo's latest fits the bill. But while the performance issues and the overactive ambient white point adjustments could be fixed with future updates, I wouldn't buy one hoping for that to happen.

The Smart Display 7 is especially disappointing given how much I enjoyed the company's bigger smart displays last year. Although I love the unified design language Lenovo is presenting between this and the smaller Smart Clock (which I love), I think the company still has a few kinks to work out before I can recommend the Smart Display 7.

Netflix tests long-term plans discounted by up to 50%, starting in India