The Pixel 4 officially launches tomorrow, though many people have already received the phone a little early. Just in time for the official release, Google has published an update to its camera app, bringing it up to version 7.2. It adds back H.265 video to the Pixel 4 and improves the new Social Share feature by adding Slack as another option.

H.265/HEVC is a more efficient codec than H.264/AVC, so using it on the Pixel 4 will help you store more video files without using more space. Google warns that it may not be supported on all platforms or by all video players, though. The option has already been live in Google Camera 7.1 on older Pixels. 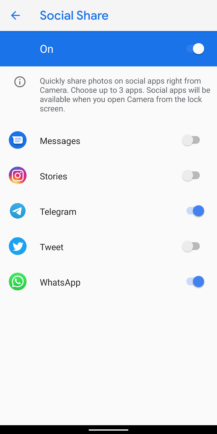 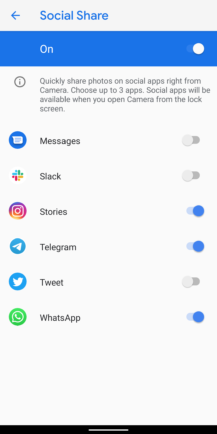 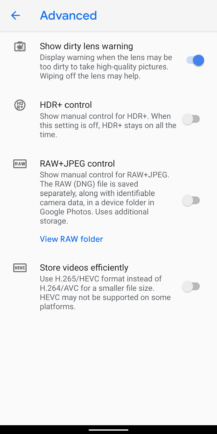 Left: Social Share in version 7.1 without Slack. Middle: Version 7.2 including Slack. Right: "Store videos efficiently" option should show up on the Pixel 4 now, too.

Along with the addition of Slack to Social Share, the app also respects system font size going forward, so when you head into its settings, you won't be greeted by bigger or smaller text than in any of your other applications.

You can wait around until the update officially hits your Pixel, but you may also download it right now over at APK Mirror.

It appears the option for H.265/HEVC in the Google Camera app has recently disappeared for the Pixel 4, probably as a result of the November update:

In our anecdotal testing, the setting still appears on Pixel 4 devices that have yet to update to the November patches. Those that have updated have lost the option, even on versions of the Google Camera app that previously had it. The setting is also still present for other Pixels, like the 3 and 3a.

The functional patch changelog makes no mention of this change unless it's part of the Pixel 4 and 4 XL's vague "camera quality improvements." We reached out to Google about the feature's apparent removal, but the company could not provide comment on this story in time for publication.

Back again with December patch

The H.265/HEVC setting in the Google Camera app is back now on the Pixel 4, likely with the December security patch that started rolling out this week.

Netflix might expand mobile-only plan to more markets outside of India (Update: Indonesia)