You can view the launch trailer for Black Desert Mobile above, and while it's a shorter video, it should provide a good idea of what the title's brawling-based gameplay looks like in action. Now, Pearl Abyss boasts at the end of the video that Black Desert Mobile will provide a true MMORPG experience at your fingertips, and while I wouldn't say today's mobile release plays like the PC and console versions of the game, it definitely blurs the lines between AAA and mobile titles. There's no doubt that the production value in Black Desert Mobile is off the charts, but this is still a mobile game, so things like auto-questing, auto-combat, upgrade timers, loot crates, and numerous in-app purchases are also included. 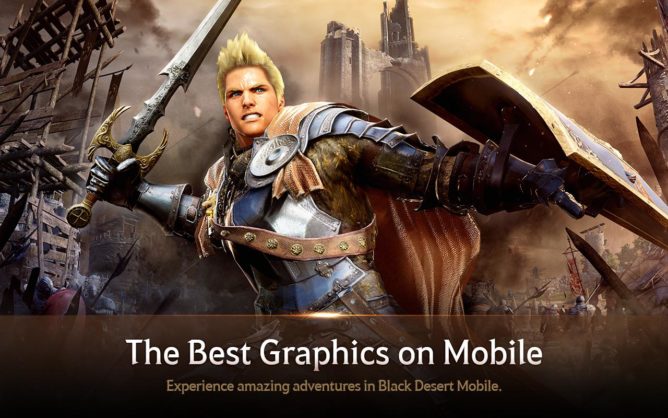 When you begin the game, only auto-questing will be available, which means you will have to manually control your fights at first, but after the first hour or so, you'll unlock auto-combat. At that point, you can easily let the game play itself as you jump from mission to mission. You do have the choice to control everything manually, though I find auto-combat makes it easier to get through the grindy bits while leveling, but this comes down to personal preference. Of course, it's probably worth keeping in mind that most players will take advantage of the auto-mechanics, so if you choose to play manually, you will lag behind the majority of the player base.

It's also worth mentioning that the customization offered when creating your character is phenomenal. This is something the PC and console versions of the game have been known for, and Pearl Abyss has luckily delivered a similar experience in the mobile version released today. While it would seem each of the five available characters is locked to their sex, past that you can customize to your heart's content. Honestly, I could easily spend hours in the character creation menu, which is quite something for a mobile release. 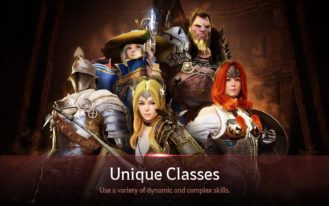 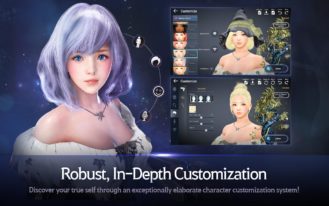 Sadly not everything is unicorns and rainbows. As I already mentioned, the game includes many in-app purchases, and they range all the way up to $99.99 per item. Of course, the in-game shop offers many different things, such as package deals, an in-game currency called Pearls, and items you can purchase with those Pearls such as outfits and add-ons. So if you're not a fan of how the PC and console versions of the game are monetized, you're not going to like much of the monetization in the mobile release either. It's also worth noting that this is a large game, taking up 3.24 GB of storage on my Pixel 4, and it can be demanding at times. While I can play on mid-range hardware like the Galaxy Tab S5e, the graphics definitely take a hit over the Pixel 4. At the very least, the game is optimized well despite its demanding graphics, which means it's compatible with a wide range of hardware.

All in all, Black Desert Mobile is easily the most enjoyable MMO I've played on Android. While the monetization isn't the best, the action-based gameplay holds up, especially if you choose to play manually. The entire game controls like a quality 3D brawler, with your moves on the right, and your thumbstick on the left. The graphics are also superb, and the game performs well, even on mid-range devices, though you will have to take a graphics hit. It's clear that Pearly Abyss put a lot of work into Black Desert Mobile, which is why I'm sure I'll be playing this game for some time to come, so if you'd like to check it out today, you can grab the install from the Play Store widget below.

To begin new adventures, players can take on the title of “Adventurer” by choosing a character from five unique classes: Warrior, Ranger, Giant, Witch, or Valkyrie. They can enjoy diverse in-game features and contents through quests, participate in multiplayer contents such as the Ramoness Arena and 3-on-3 PvP modes, and develop their characters to their full potentials. Moreover, Life Skills such as gathering, fishing, crafting, trading, and dyeing fabrics are available. They can also try the Black Spirit Mode, which is another special feature that enables them to gain EXP and rewards for up to three hours at a time without a network connection, even when the game is completely turned off.

To commemorate the 4.5 million pre-registrations milestone, various in-game items will be provided in appreciation for all the Adventurers’ that pre-registered. These rewards will allow them to have a better understanding of the game contents while helping them to grow and decorate their classes.

Additionally, Pearl Abyss is launching a special campaign in partnership with Amazon. Until March 17, 2020, Amazon Prime members in any country where Twitch Prime is available can claim Black Desert Mobile rewards. Adventurers can simply log in to their Amazon Prime accounts and use the event tab to receive in-game buffs, character cosmetics, and items.

Black Desert is Pearl Abyss' open-world action MMORPG with cutting-edge visuals and skill-based combat that redefines the genre. With the most developed character customization system of any game currently on the market, users can break out of the norm and make unique characters that truly represent themselves. Its intuitive controls, beautifully designed world, and extensive lore will excite both newcomers and veterans of MMO games and action RPGs.

Established in 2010, Pearl Abyss has developed the MMORPG franchise Black Desert for PC, mobile, and console. All their games are built on their proprietary engine and are renowned for their cutting-edge graphics. With multiple projects in the works, they are poised to continue their growth through 2019 and beyond to maintain their position as a leading developer in the game industry. More information about Pearl Abyss is available at www.pearlabyss.com.

Netflix tests long-term plans discounted by up to 50%, starting in India

Google is rolling out stolen password protection in Chrome 79