MicroSD cards are still a popular storage medium — all the manufacturers include full SD-size adapters anyways, so they make for easy gifts to anyone who has a camera that's not a phone. In any case, we may have passed the commodity event horizon where these cards cost so little on their own, but would be better bought in bulk on sale. Luckily enough, Best Buy has the best price on SanDisk Ultra Plus 128GB cards today only.

So, here's the tricky thing about this card: in SanDisk's very sensical branding scheme, the Ultra Plus is a half-step up from its most basic Ultra tier and a half-step down from its Extreme tier. You'll see SanDisk's trademark red on one half of any given card and a gray band for Ultra cards or a gold band for Extreme cards. This Ultra Plus thing used to run with a unique whole-body black color plus red text on top, but has since reverted to the red-and-gray combo.

The key spec you have to be concerned about is that its maximum transfer rate is 130MB per second and that it's rated A1 for running Android apps externally and V10 for 1080p video capture. It's slightly better than the Ultra, which is rates the same for both apps and video, but nothing exceptionally meaningful. 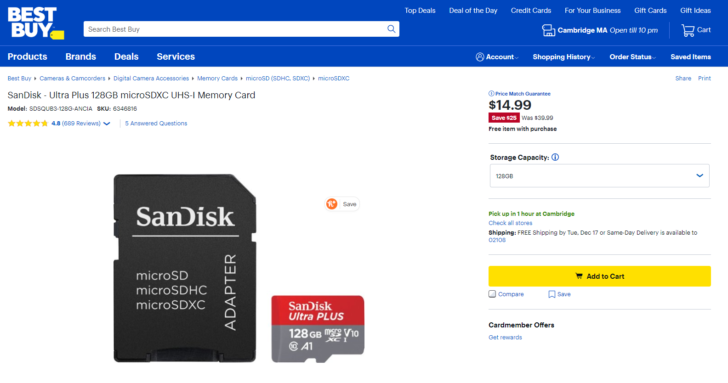