Multiple users on the Universal Profile, T-Mobile, and Sprint subreddits have confirmed RCS has been enabled on a variety of devices, including Google Pixels, Samsung Galaxies, various OnePlus handsets, and Motorola phones after installing the latest version of Carrier Services. If you haven't grabbed the update yet, you can download it from the Play Store or at APK Mirror. After that, you should receive a popup asking you to agree to use RCS. If not, 9to5Google notes that you may also need the latest Google Messages update before RCS can be enabled. 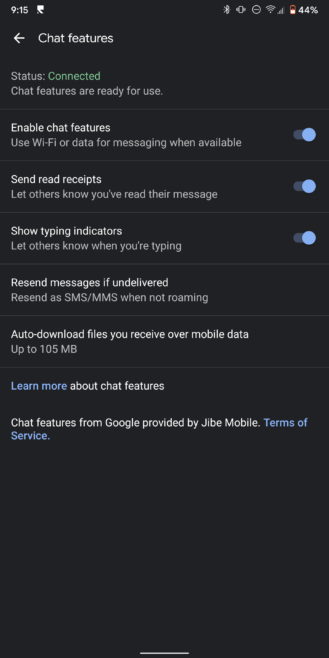 Although Google has largely taken the RCS expansion into its own hands, the four major US carriers aren't standing idle. In October, AT&T, Verizon, T-Mobile, and Sprint announced a joint venture to build a cross-carrier RCS solution that wouldn't be based on Google Jibe, but it does promise to be compatible with other RCS Universal Profile implementations. If you have more questions about RCS, you can learn about what the service is, how it's secured, and a ton more in our comprehensive writeup here.

Hi everyone! RCS is now available to all users in US as of Monday. Make sure to update both Messages and Carrier Services. The Pixel 4's enhanced RAM management will come to other Android phones, eventually