Christmas Eve is only 20 days out, and as such, Google has teamed up with Santa's Elves just in time to spread the festive spirit around the world. Google Assistant will offer you fresh broadcasts from the North Pole Newscast every day, and the Elves have polished up the Google Santa Tracker, which lets you explore Santa's village starting today.

To catch the daily newscast from Google's chief Elf correspondent Dimplesticks, just say, "Hey Google, what's new at the North Pole?" You can also ask the Assistant to give you a Santa joke or tell it to "call Santa" to help him solve a quirky problem — he needs to think of a musical genre for his new Christmas band (though in some locations, Santa won't pick up your call).

When you're ready to explore the North Pole yourself, just download the Google Santa Tracker app from the Play Store or head to its website at santatracker.google.com. From there, visit Santa's Village and discover his new toy factory, the greenhouse, and the reindeer gym. You can start more than a dozen games and learning activities. For example, it's possible to build your own wintery scene with the new 3D snowbox. Some of the activities in the village are still hidden, but as Christmas inches closer, more games and experiences will be unlocked.

Other Google products have also received new festive features. Google Earth lets you test your knowledge of Christmas traditions around the world, or you can take a tour of international holiday foods. If you search for "santatracker gifs" on Google Images, you'll get a collection of shareable Christmas GIFs made by the company. 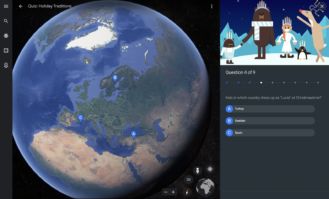 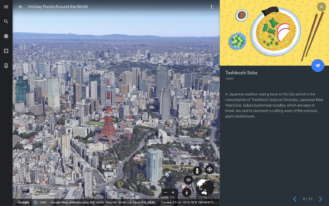 You can access Google Santa Tracker via its website on both desktop and mobile. If you decide to get the app from the Play Store, keep in mind that for the moment, you can only access the old 2018 version — the 2019 update hasn't landed just yet.

The new Santa Village and the games haven't been available in the Santa Tracker Android app, but that's changing as we speak: The 2019 update has started rolling out on the Play Store, and if you're particularly impatient, you can also download the latest release from APK Mirror right now.

🎨 Design an elf all by yourself with Elf Maker.
🎁 Make your chats merry and bright with a brand new Gboard sticker pack.
🎪 Enjoy a redesigned village plus several game updates.
🗜️ Mrs. Claus implemented advanced technologies to get the app running faster while using less space.