Qi wireless charging's popularity has seen an ebb and flow since the tech's introduction. After growing slowly but steadily for several years, it stalled for a while, but is seeing a resurgence now with many popular smartphone makers supporting the standard. Flagships from Google, Samsung, Huawei, and several other Android brands are Qi compatible nowadays, and accessory makers have jumped on the trend.

Beside wireless charging pads and stands, many have combined the convenience of plopping a device on a surface and seeing its battery fill up with the simplicity of magnetic mounts, to create a product that's nearly seamless to use. Today, I'm taking a look at one of these magnetic plus Qi charging systems from Moshi: SnapTo.

Like any magnetic mounting system, Moshi's SnapTo relies on a metallic plate that you stick on your phone or case. For iPhones, the company makes special cases with two carved slots for small curvy SnapTo Tabs. These ensure a clean look on the outside, without losing wireless charging capability or magnetic power. A pair of Tabs costs $3.95, but they're bundled with every SnapTo mount, so you don't need to buy them separately unless you have multiple devices.

I decided to try them on my Pixel 4, regardless of the lack of a dedicated case. I simply stuck the Tabs on the inside of one of my thin Pixel 4 cases, in a position that wouldn't interfere with Qi charging but would still be compatible with the SnapTo mounts. (It's similar to Artem's trick, except you're avoiding the middle of the phone and Qi coil by design.)

The setup works. I barely feel the Tabs when I'm holding my phone in its case, and I didn't lose magnet power or Qi charging. You can also stick the Tabs directly on your phone, but I think that looks ugly. 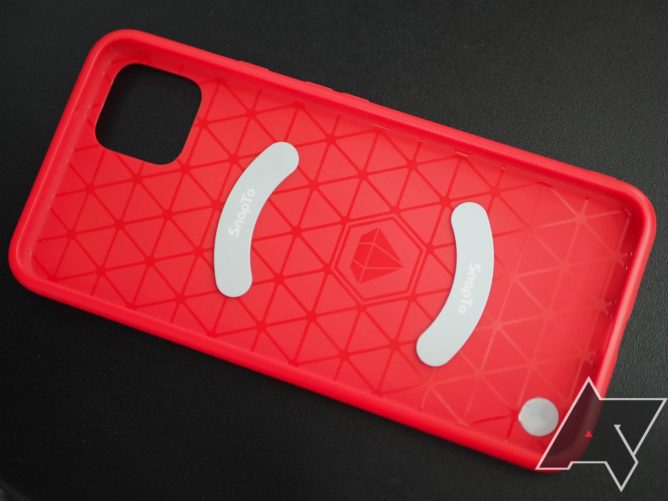 If you use thicker phone cases or you're afraid the magnet won't hold the phone well, you can get the standalone SnapTo Transformer, which was made by Moshi specifically for Android devices. It's a large plate/sticker covered in a faux-leather with "moshi" engraving that doesn't interfere with Qi charging. Thanks to an included alignment tool, you can perfectly center it on your phone or case. On the back, it has a sticky pad — not a single-use 3M sticker — so you can remove it, clean it with water, and reapply it on any device or case you want.

I used the Transformer on a chunkier Pixel 4 case, and despite the double added thickness, my phone kept charging wirelessly. And since it's on the outside of the case, its magnetic power is much stronger than the Tabs placed inside the cover. 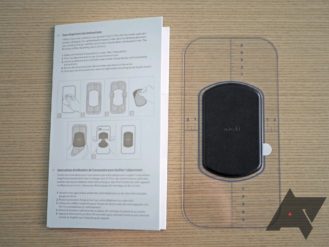 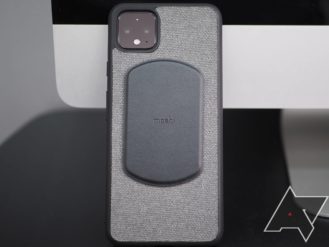 SnapTo Transformer on the outside of a thicker Pixel 4 case.

Despite these benefits, you need to keep in mind a few inconveniences: the Transformer is large, ugly (in my opinion), thick, and could interfere with fingerprint sensors if your phone has one on the back. So it's not ideal for every phone.

Now that the metallic part is attached to your phone, let's look at the different mounts you can use. The first one is a wireless car charger that can be attached to the air vents or dashboard. It has a solid rotating ball head, strong vent clamps, a USB-C port on the back, and a Qi and magnetic pad on the front. It ships with a manual, two Tabs, and a USB-A to C cable, so you have nearly everything you need. If your car doesn't have USC-A power output, you'll need to get your own charger, but make sure it supports 9V as you'll need that to get the full 10W out of the Moshi Qi pad. The mount looks good and feels solid, but it attracts lint and dust.

Since my car's dashboard lacks any decent straight surface, I had to attach the mount to the air vents. The clamps are solid, so I don't pull the whole mount away when I take my phone off, like I've experienced with cheaper magnetic air vent holders. The pad rotates and tilts in different angles; its magnet power is fine, but not super powerful.

I noticed that the bond is very strong when using the Transformer plate on the outside of my grey Pixel 4 case, and I never worried about driving around with that setup. But the attraction is noticeably fragile when my phone is in my red case with the two Tabs on the inside. The case is obviously interfering with the magnet. My phone didn't fall off the one time I tested it with this make-do setup, despite driving on Lebanon's bumpy roads, but I wouldn't repeat this. 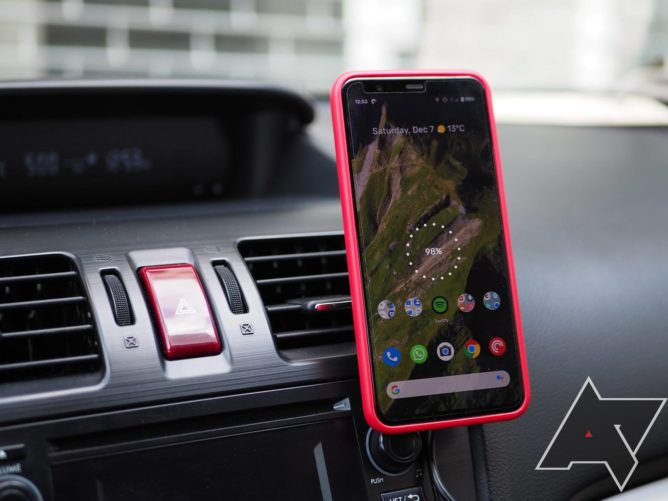 Overall, it's very convenient to just get in the car, plop the phone on the pad and know it'll stay within eyesight for the whole drive. If the battery is running low, I can plug in the car charger and have it fill up, without taking up the USB-C port on the phone itself, which leaves it free for audio output if needed. I can also grab my phone and get out of the car quickly, a nice bonus when I'm making multiple stops.

Moving away from your car, SnapTo has a magnetic wireless charger for your desk or bedside table. It's a smart system that uses a small mount and a large pad/stand that snaps on it and rotates 90 degrees. Like the car mount, the charger part has a USB-C port on the back and a 10W Qi pad on the front. It comes with a USB-A to C cable and two SnapTo tabs, so you still need a standalone wall charger or hub to get your phone filled up. The wireless charger is a desk stand and a vertical mount too.

I attached the mount on the bottom of my iMac at work and now I can keep my phone within eyesight, charge it when needed, and simply take it off, either with the pad or without it. The mount offers an added convenience: When you're done with it, the two pull tabs sticking from the bottom let you easily remove it without fighting against the 3M tape. The magnet here is perceptibly stronger than the one on the car mount. I didn't have any trouble with my red case with the two Tabs placed inside. It attaches powerfully to the pad and doesn't feel like it'd budge easily. The Transformer provides a slightly stronger bond still, but it doesn't seem necessary in this case.

The versatility of this unit is my favorite part. It can be a simple desk stand, a fast wireless charger, and a wall/vertical mount, in one. Plus it rotates to landscape without taking the phone off.

If you're not interested in the wireless charging aspect and just want the mounts, Moshi also makes a regular car charger (that I didn't test) and wall mount (pictured here). The wall mount rotates too, for extra convenience. 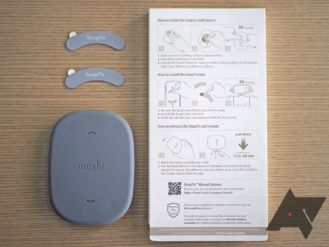 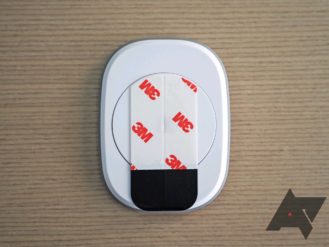 SnapTo's wall mount is simple enough, but it rotates too.

Maybe. The combination of Qi charging and magnetic mounting is super convenient in everyday use. Moshi's SnapTo system executes the idea very well: It's simple, smartly elegant, well-specc'ed, and provides solutions for your car, desk, bedside table, and other environments. The mounts are built well and have a versatile design with interesting extras that aren't found in cheaper brands.

However, all of these products are expensive compared to cheaper white label products, and we're always going to feel bitter when we don't see proper support for Android. Sure, there's the Transformer plate but it's not as elegant as the special iPhone cases with their embedded Tab slots, and it's not compatible with Android devices that have fingerprint sensors on the back. The Tabs work if you stick them inside thinner cases, but you may still lose attachment power, especially with the car mount. If Moshi would just release at least one SnapTo-compatible case for a few Android flagships, this product would be much easier to recommend. 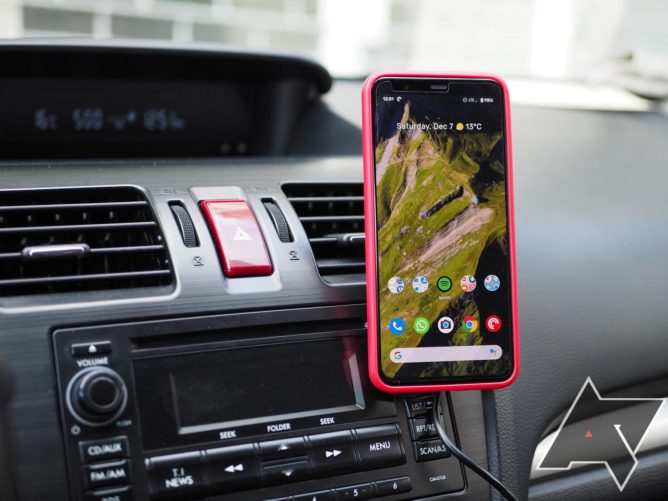 Amazon's version of the Chromecast Audio is just $10 right now