Is $900 a lot of money for a OnePlus phone? Sure, I guess. But it's only $150 on top of the price of a similarly-configured OnePlus 7 Pro when it launched earlier this year, and you do get slightly faster charging and a slightly faster processor for your trouble, too. Even if we say those are worth nothing at all, take the competition into perspective: Samsung wants $1300 for the 5G version of the Note10+, a phone I'm not even convinced is appreciably better than the 7T Pro in all but a few fairly subjective ways. There's nowhere near $400 more phone in a 5G Note10+, and it would be farcical for anyone to suggest otherwise.

Couple that strong value argument (for a 5G phone) with the fact that this phone offers 5G most people in the US can actually use, and I think you have the first recipe for 5G success here in America. You can read my full write-up on T-Mobile's new 600MHz 5G network for the nitty gritty details, but suffice it to say, this is the only 5G most people in the United States will probably get to experience for a while. Verizon and AT&T's millimeter wave networks are rolling out at a positively glacial pace, and it seems ever more likely that Sprint's growing 5G mid-band network will be gobbled up in a merger with T-Mobile. If that merger does succeed, T-Mobile will have the best 5G in the US by far, and from what I've heard, plans to integrate Sprint's 2500MHz network into T-Mobile will proceed very rapidly once the merger closes (as in, a few months). 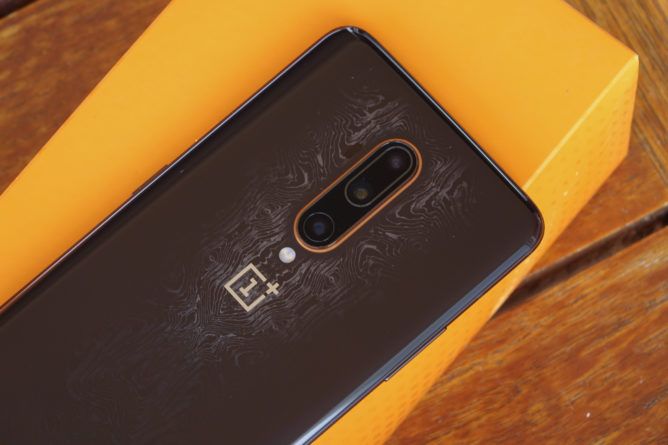 The 7T Pro McLaren 5G is ready for T-Mobile's 5G future, with or without Sprint.

The 7T Pro is even future-proofed for this eventuality, as it is compatible with Sprint's mid-band 5G right out of the box. That means once Sprint's network is part of T-Mobile's, this OnePlus phone will be able to access T-Mo's entire (meaningful) 5G network. And from what I can see, the 7T Pro really doesn't give up much in the chase for that 5G connectivity. It has a discrete X55 cellular modem that probably marginally reduces its battery life, and software updates will likely be slower to arrive than on OnePlus' non-5G phones. But these sub-6 5G networks aren't the kind of radical technological shift we experienced when going from 3G to blazing-fast LTE; they're basically just more advanced versions of our existing 4G networks. And that's borne out in my testing, as I've experienced no connection stability or flip-flopping issues while using the 5G version of the 7T Pro, and performance has been largely consistent.

But the reason this is the first 5G phone I want to buy is simple: it's the first one where the 5G part provides an actual benefit to most people in most places (and also doesn't cost an arm and a leg). 200 million POPs are covered by T-Mobile's new 5G network, and right now, that network is basically empty. T-Mobile has dedicated chunks of that 600MHz spectrum to 5G alone for the time being, and that means if you're covered, you'll basically have that network to yourself for months (i.e., until the Galaxy S11 launches). And even when 5G phones do start to proliferate, it'll take at least a generation or so before that network really starts to get saturated. If I was in the market for a phone upgrade, it would be hard for me not to choose the 7T Pro on T-Mobile. As is, I've already become dependent on it as my rock-solid mobile hotspot here in Maui during Qualcomm's Snapdragon event, and the thought of going back to speeds on AT&T that are often barely a tenth of what I'm now getting on T-Mobile is... unappealing.

I've long been a skeptic of the gigabit promises of millimeter wave and of the, frankly, ridiculous use cases we see posited as the reasons we must have 5G for the future. But what T-Mobile and OnePlus are giving you is pretty concrete (assuming you're covered): a truly great phone that runs on a faster network that covers most major regions (and provides great indoor coverage, to boot). Honestly, the fact that it's 5G is just icing on the cake—and I'm getting seriously tempted to just go ahead and make the switch.