Google introduced the idea of a premium Chromebook (and a matching premium price tag) with the original Chromebook Pixel. Other companies have followed suit with devices like the Yoga C630 from Lenovo and some HP X360. In this competitive landscape, Acer has a compelling solution of its own: the Acer Chromebook 715. Acer's new high-end Chromebook sports an all-metal construction with MIL-STD 810G compliance, optional quad-core Intel Core i5 processor with up to 16GB of RAM, a full-size keyboard with a number pad, and an optional fingerprint reader. Currently, there is no other large Chromebook on the market that has those last two features.

The Chromebook 715 I've been using for the past two weeks (CB715-1WT-527F) is Acer's top-range model, priced at $779.99. Although it is expensive for a Chromebook, Acer almost justifies the price with impressive build quality, top-tier performance, and one of the best laptop keyboards I've ever used. As close as it comes in some ways, Acer has cut corners in a few areas that make the Chromebook 715 tough to recommend. 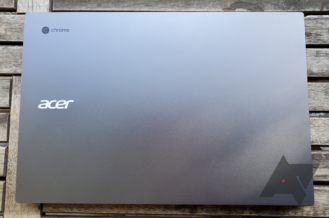 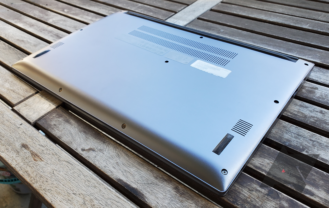 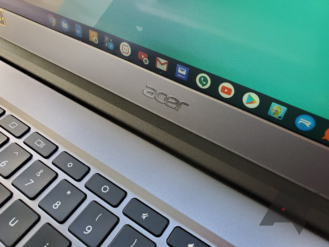 All the design features you'd expect from a high-end product are here: an anodized aluminum chassis with no sharp edges that feels smooth and dense, a glass touchpad, a backlit keyboard, multiple USB-C ports, and a reasonable weight that makes this large laptop still portable. There's a USB-C, USB-A, and a headphone jack on the left side, while the right side houses another USB-C port plus a microSD and Kensington lock slots. Either of the USB-C ports can be used for charging and data, which is very convenient.

Although the chassis is 100% aluminum, the screen bezel is not. It's matte plastic, but it doesn't detract from the overall aesthetics. The hinge operates quietly and smoothly, but you still have to use two hands to fold out the display. The speaker placement was a missed opportunity — Acer has them on the bottom although there is clearly enough room above the keyboard area. 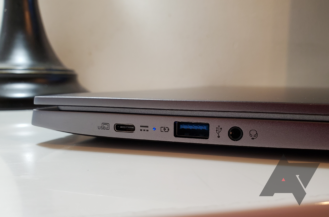 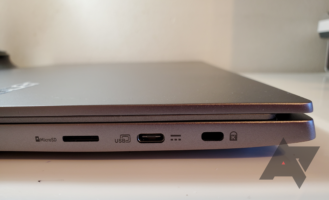 All in all, it's a safe but a bit generic design, lacking the playfulness of the Pixelbook Go or the head-turning color finish of the Lenovo Yoga C630. It would look at home in any office or classroom.

The trackpad and the full-size keyboard are exceptional. Coming from a cramped but usable HP Chromebook X2, I really appreciated the extra space on the 715. Having dedicated keys for page up/page dn, home/end, and delete made it quicker to get work done. The number pad was vastly better for number-crunching sessions than the number row you're stuck with on most laptops. 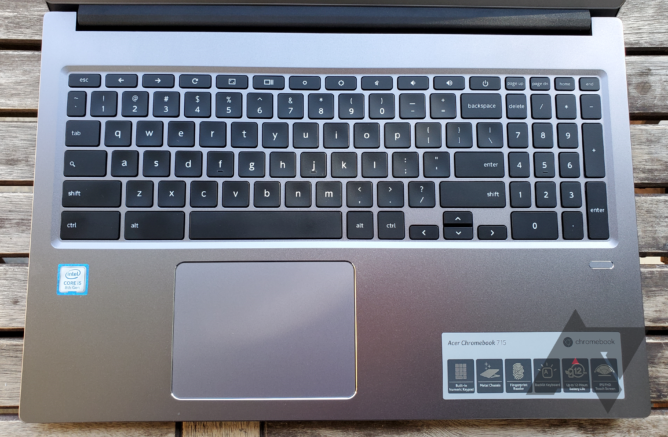 Typing on the Chromebook 715 keyboard was a pleasure thanks to its responsive, tactile keys—I consistently scored 94 WPM on a typing test. There's a satisfying click with each press, but it's not overly noisy. Keyboard flex is minor, with the area above the screen brightness keys being the softest spot. The generously-sized Gorilla Glass touchpad served me well, too. It was smooth, tracked accurately, and clicks were firm.

There is a fingerprint reader below the number pad, and it was fast and accurate. Just a quick tap, and you're logged in. Adding fingerprints is optional via Settings > Screen lock and sign-in. This will be familiar if you've ever set up the fingerprint reader on a smartphone (who hasn't?). 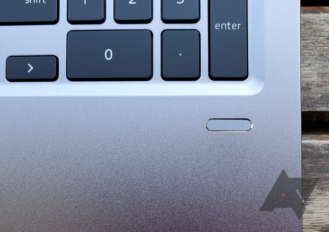 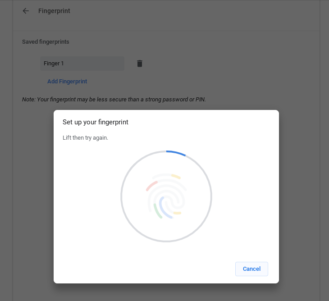 Despite all the premium hardware in this Chromebook, Acer cut corners with the display and audio. The 1920 x 1080 resolution stretched over a 15.6" display area resulted in noticeably grainy text, especially against a predominantly white background. Other premium Chromebooks in this price range have smaller 1080p screens, much higher resolutions, or both. The display doesn't get very bright, either, topping out at just 250 nits. If you're the type to work outdoors, it's going to be hard seeing anything on the Chromebook 715, even at full brightness. The colors are dull as well, making the 715 a lackluster media consumption device. 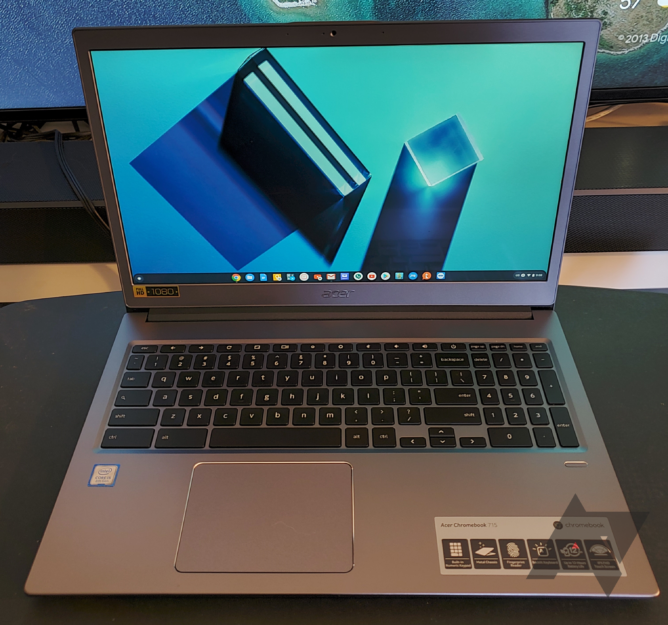 Even at maximum brightness, the screen is too dim.

The downward-firing speakers were even more underwhelming than I expected, even by laptop standards. There was no distortion at max volume, but sounds came out hollow and muffled. You really need a good pair of headphones to enjoy media on this Chromebook.

Chrome OS may be a relatively lightweight platform, but it still runs better with more cores and more memory. The quad-core Core i5 and 8GB of RAM inside my review unit made Chrome OS exceedingly performant from its initial setup to running multiple instances of Chrome with over 40 tabs open. It handled all I could throw at it with nary a struggle. 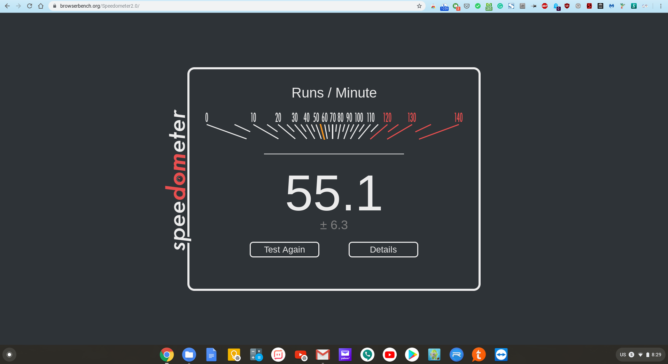 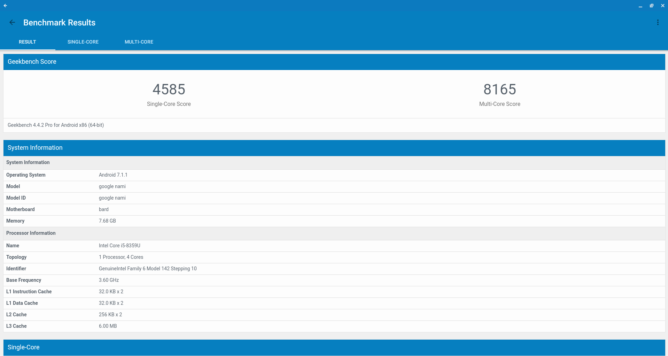 The Speedometer 2.0 and Geekbench 4 scores bear out the laptop's computing prowess. The Chromebook 715 scored 55.1 (runs per minute) on a test of web app speed, beating out a score of 51.6 from my HP Spectre x360 Windows laptop (Core i7, 8GB RAM). On Geekbench 4, the Acer performed admirably as well, scoring only a little behind the Spectre's 4775 for single-core and 12,789 for multi-core. There are lower-priced models that come with a dual-core Pentium/8GB RAM and a Core i3/4GB RAM configurations, but I suggest staying away from those if you can. The performance difference between the Core i5/8GB Chromebook 715 and my HP Chromebook X2 with a dual-core Core m3/4GB is like night and day.

I've been getting a solid 8.5-9 hours consistently at 75% screen brightness, with endurance falling to 6.5 hours at 100% brightness. Considering the laptop is powering a 15W Intel processor, I'm quite happy with its consistent 8 hours and change.

Maybe. The Acer Chromebook 715 is very fast, and it can handle normal Chrome OS tasks with flying ease. However, it compares poorly to similarly priced devices. Even at max brightness, the display is hard to see outdoors, and pixel density is middling. At this price point, there are several other Chromebooks that are just as fast with better displays. But if you aren't as picky as me and must have a full-size keyboard with a number pad, then go with the Chromebook 715. 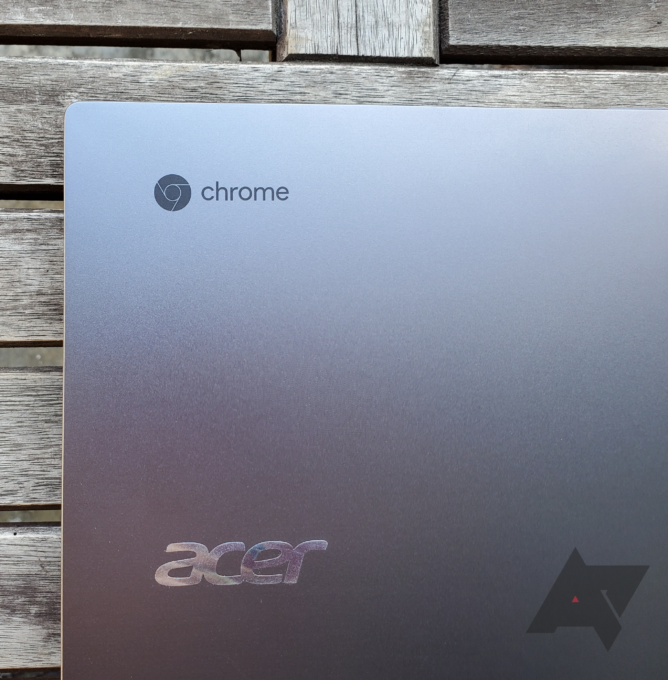 Galaxy Fold now available in Canada for the low price of $2,600