When you hear the word ”smartwatch,” the last name that probably comes to mind is PUMA. Despite all other major athletic brands having thrown their weight behind wearable tech — like the Under Armour Samsung Galaxy Watch, Nike Apple Watch, and Adidas Fitbit Ionic — PUMA has remained out of the wearables race… that is until the PUMA Smartwatch made its debut at IFA 2019 as the newest Fossil partner. I’ve been wearing the PUMA-branded Wear OS device for the last two weeks, and there are some things you should know before strapping one around your wrist.

The PUMA Smartwatch may be covered in the athletic brand’s insignia, but don’t let the leaping feline fool you. Spec for spec, this piece of kit is last year's Fossil Sport in cat's clothing.

It features the same Fossil backplate and heart rate sensors stamped onto an equally familiar 44mm casing with 5 ATM water resistance, albeit with two less side-mounted buttons to straddle the crown. The PUMA Smartwatch includes an onboard GPS, accelerometer, and gyroscope to appease the runners it's trying to target. There’s a mic that can be used to talk to Google Assistant, but no speaker means you won’t be taking any calls from your wrist. The watch comes in three different colors: black, yellow, and rose gold. Under the hood sits Qualcomm’s Snapdragon Wear 3100 processor, 512MB of RAM, and a battery that claims 24 hours of use on a single charge (more on that below). 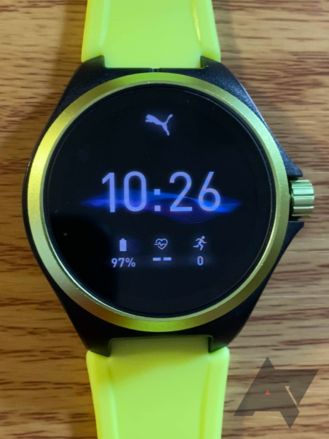 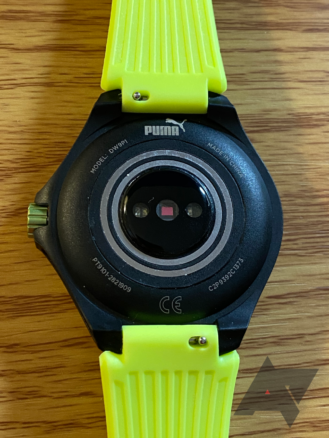 PUMA Smartwatch front and back

The accents on the yellow model are striking. Unfortunately, the watch doesn’t feel nearly as nice as it looks. The bright 16mm interchangeable strap is closer to a pliable plastic than the silicone it’s pretending to be. The edges of the black polycarbonate lugs are rough and unfinished — almost sharp to the touch. The yellow aluminum bezel and matching crown are clearly a different shade than the included band. Although, it is admittedly difficult to color-match metal with silicone.

Once on the wrist, the PUMA Smartwatch is light, comfortable, and unobtrusive. The rough edges aren’t nearly as noticeable when not being prodded. Nothing seems amiss as you tap and swipe on the display. Haptic buzzes for notifications are strong, though the vibrating motor rumbles with the subtlety of a jackhammer. 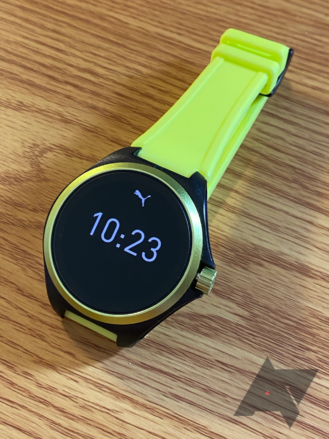 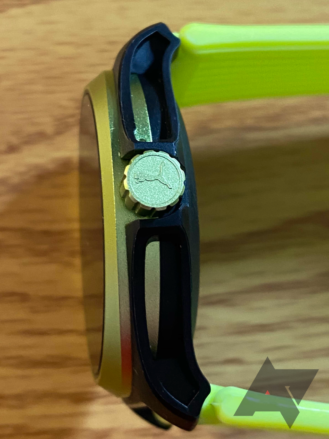 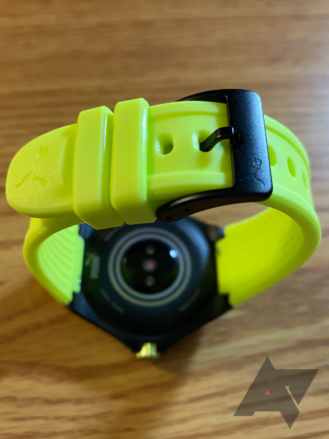 Inside the box are the usual suspects: the PUMA Smartwatch, a magnetic USB charging cable, and a small stack of manuals. As for a wall adaptor, you'll have to dig one up yourself.

The PUMA Smartwatch is running Wear OS, so it comes with all the benefits and caveats of Google’s wearable platform. In testing, Google Assistant often suffered from unknown connection errors. Touch navigation would stutter and lag while under load, especially when installing a new watch face or app. Even when the PUMA Smartwatch was idle on my wrist, there were two instances where the watch buzzed, became unresponsive for 10 seconds, and then finally delivered a notification.

Despite its shortcomings, Wear OS does have its own unique charm. I’m a fan of the always-on display option, watch face customization, and mostly reliable notification delivery. Any Google-powered watch can do these things, though. What sets the PUMA Smartwatch apart from other Wear OS devices is its array of PUMA-branded software. That's not necessarily a good thing, though.

The watch comes with PUMATRAC, a run tracking app that uses the onboard sensors to monitor steps during indoor walks and taps into the built-in GPS – or connected GPS via a smartphone – to map outdoor runs. After a workout, data is automatically saved to Google Fit, which is both convenient and curious since Fit can also track runs with GPS, plus it can monitor other types of activities that PUMATRAC can't, like biking, strength training, aerobics, and more. In this way, PUMA's app feels more like branded fitness bloatware than a helpful tool. 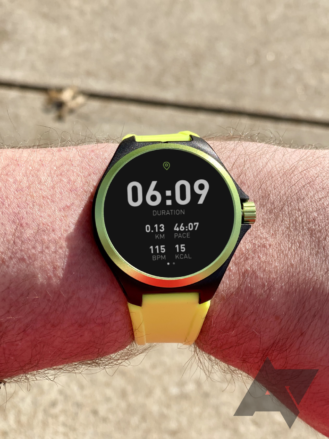 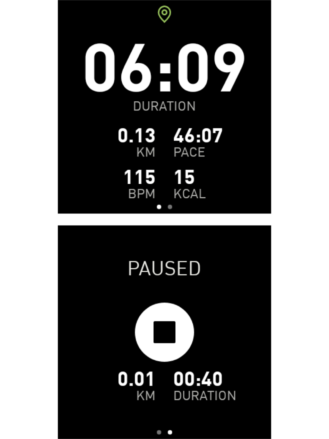 The watch also comes with four pre-installed faces, all with sporty designs. They don’t appeal to my personal tastes, but if I had to rank them, I'd say Bounce wins for being most functional, Heart Rate is visually pleasing, Scorecard is arguably tacky, and Reach is the most gimmicky. 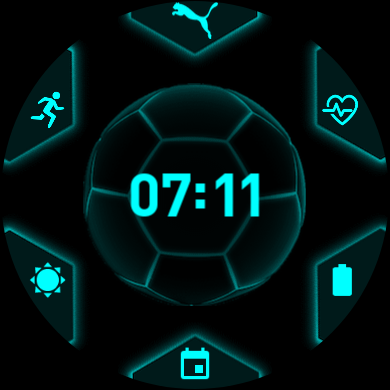 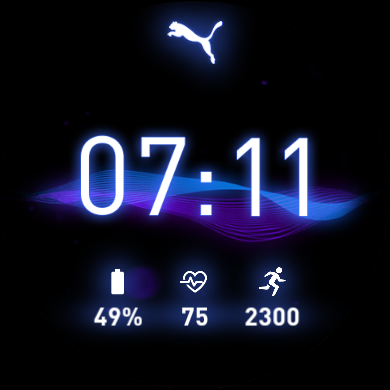 Above: Bounce and Heart Rate Below: Scorecard and Reach 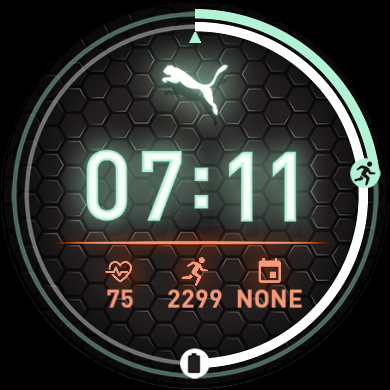 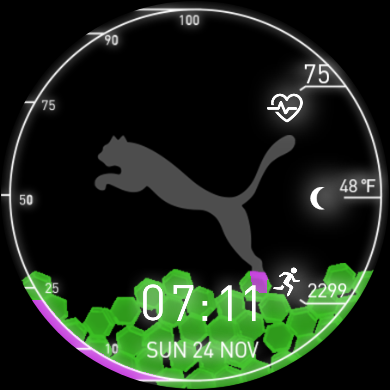 If you’re hoping to get the lofty 24 hours of use between charges that Fossil promised, you'll be sorely disappointed. The PUMA Smartwatch's battery is just good enough to eke out a 16-hour day before hitting the cradle. Don't push it much further than that unless the default "always on" display is deactivated or battery saver mode is on. You'll definitely need the latter if you plan to use the watch's fitness features. A casual 7-minute walk with GPS drained the battery by 6 percent, a significant hit for a device that already struggles to make it through a day.

In terms of performance, Wear OS running on a Snapdragon Wear 3100 with only 512MB of RAM feels just about as clunky as expected. It's a “good enough” wearable experience for anyone that would rather field notifications from their wrist instead of a phone, but in a world where competing wearables are literally saving lives, "good enough" just doesn’t cut it anymore. The Wear OS ecosystem is in serious need of revitalization, and with Fitbit by its side, there is hope that could happen. Today, though, Wear OS on the PUMA Smartwatch is anemic at best.

No. It’s hard to recommend the PUMA Smartwatch to even the runners it’s trying to target. An extra $20 will bag you a Fossil Gen 5 with the same sensors, better performance, and a ton more case style options. Then there's the Fossil Sport, which has the same specs as the PUMA watch and better build quality. The PUMA Smartwatch is simply not worth the price with its cheap build quality and meek performance.

You’re a runner, jogger, or walker who also happens to really love the PUMA brand.

Don’t buy it if

You’re looking for the best Wear OS gadget for your hard-earned dollar bills. The PUMA Smartwatch isn’t it.

Any.do and WhatsApp team up to let you set tasks and reminders via chat