When your job relies on the timely delivery of packages at a regular interval, keeping track of all the incoming and outgoing mail can be a bit of a challenge. Back in the day, Google Now made it pretty easy, but Google killed that as it did so many other useful tools. Today the company has announced a new "Package Tracking Early Access Program" that promises better package tracking integration for more parcel delivery companies via Search itself. If it seems familiar, that's probably because some of us have had identical USPS integration for some months now.

For the unfamiliar, back in the long-forgotten year 2012, a little company called Google made a little thing called Google Now: a feed which distilled your schedule and life down into a series of useful, automatically generated cards, continuously harvesting your account data and emails to present you with the information you needed — like package tracking, flight details, and upcoming engagements — as you needed it. It was great, and then Google killed it, more recently resurrecting a hollow, sad mockery of Now's once-great glory via the Assistant. 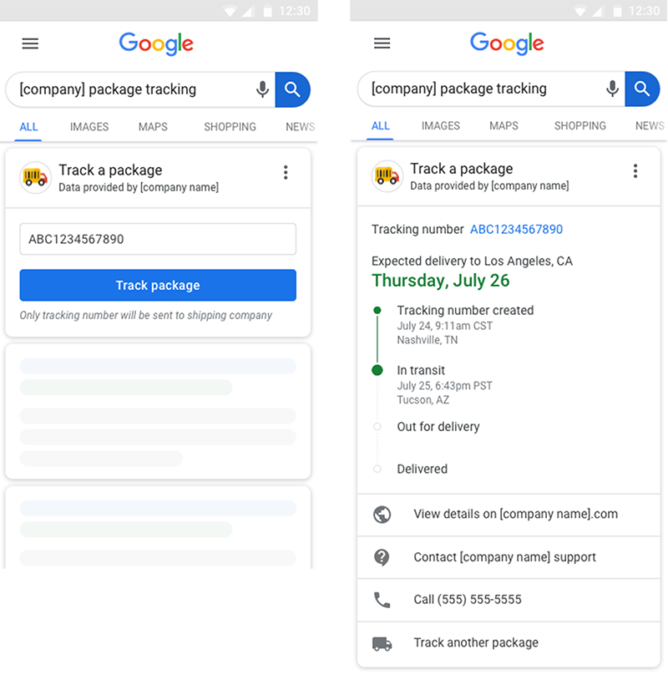 The new integration isn't like Google Now's was, though it's probably what many of our minds may jump to when we think of Google and package tracking. This simply changes the click-through to a shipper's site you're usually offered when searching for tracking numbers to a card that shows precise tracking details relevant to a given package. Unlike Google Now, it won't automatically keep track of all your packages and provide you with a constantly updating list of there whereabouts (I'm not crying, you're crying) but it will make it easier to search for tracking information on a per-package basis, providing details directly inside your search results.

Some of us have had identical USPS integration for months.

This might seem familiar, and you'd be right. USPS has been testing similar integration in Search for several months, though not all of us have it. Given Google is announcing this as part of a new program, we assume it's either opening things up in this wider program to more companies, or Google is merely re-announcing something it's been testing for a while as "new" — a not uncommon practice for the company. Either way, Google says it's new, and we've reached out to the company for clarification regarding the similarity to existing USPS integration.

Current package tracking for FedEx in Google Search via desktop (above) and mobile (below).

This new integration will require that shipping companies/carriers take the right steps for proper integration, but it is currently part of an "Early Adopters Program." Interested shipping companies can peruse the full eligibility requirements (a RESTful JSON API must be made available for Google) and fill out an interest form if they'd like to participate.

There's no word on when consumers might get to see the new integration live for more carriers outside USPS, but presumably, that will be dependent on shipping/delivery companies supporting it.

Google has provided us the following statement in response to our inquiry regarding the overlap with existing USPS functionality spotted in Search over recent months:

We are always experimenting with new ways to help people find information and improve the search experience. This is an updated version of our Search package tracking feature that we are testing with interested partners.