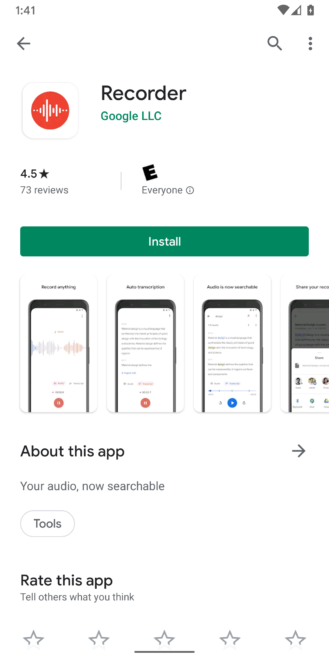 Available on a Pixel 3

Last month we saw confirmation that the Recorder app wouldn't remain a Pixel 4 exclusive, but there weren't any specifics about which devices would have access or when it would happen. The v1.1 update answers both of these questions as the app can now be found in the Play Store by supported devices.

The list of officially supported devices is where this may become disappointing to many. Judging by a look through the app's manifest file and then confirming on the Play Store with several devices, it seems only the Pixel 2 and later are supported. The original Pixel and all other devices have been left out.

This doesn't entirely limit the ability for other people to use the Recorder app, and in some cases, even download it directly from the Play Store. Many people have already pointed out that they could sideload and run it without a problem on many other phones — although it was also known to crash on launch for some, but that is also reportedly fixed. And if your phone is running a custom ROM that identifies to Google Play as supporting the PIXEL_2017_EXPERIENCE, it should also be able to see the listing and download the app freely.

Perhaps this is just the beginning of a wider rollout that will ultimately reach most modern phones, but there's nothing to suggest that will be happening. In the meantime, most people will want to continue sideloading updates. For that, the APK Mirror link is conveniently available below.

Google confirmed in a tweet that the expansion is indeed limited to Pixel 2, 3, and 3a:

Available in English only. pic.twitter.com/ji6t5r2sSI