Google has long offered freebies with Chromebooks, but it's expanded the offerings beyond its own services in recent months. For example, you can get a few months of Disney+ with Chromebooks right now. Starting today, you can also get some Android games on your Chromebook in the form of Star Wars: KOTOR and Asphalt 9.

Star Wars: KOTOR (or Knights of the Old Republic) is a circa originally released on Xbox and PC in 2003. It's an open world RPG where you become a Jedi. It's also better than anything Disney has done with Star Wars since acquiring Lucasfilm. It usually costs $10 in the Play Store. The situation with Asphalt 9 (an arcade-style racing title) is a bit different. That's already a free game, but the Chromebook perk entitles you to an in-game item pack worth $49.99. You'll get a code for the Play Store that adds the items to your game. 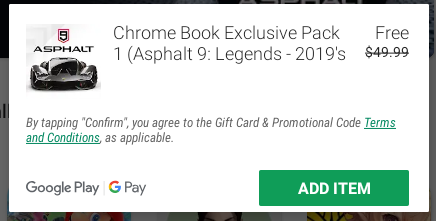 To claim the latest Chromebook perks, just head to Google's landing page on your Chromebook and click the buttons under each item. Like other recent perks, these are only available for a limited time.