I don't want to bury the lede on this one, so, here goes: I really do believe, genuinely, the Snapdragon 865 is the most important smartphone chip in a good, long while. No, it doesn't have an insane new CPU or GPU design, and no, it doesn't have an "integrated" 5G radio (more on that later). But if you're looking for the "5G is here" moment—a moment Qualcomm has been building up to for years—this is it.

There is no version of the Snapdragon 865 available without 5G. 5G is mandatory. You can't buy the chip without a 5G modem, it's in there, period. Even if it's not a fully integrated solution, that's a pretty big deal, about as big a deal as the second generation of LTE smartphones were. It's designed to work with every 5G network on the planet, a standard that is going to bring a lot of band diversity to an already dizzyingly complex world of cellular communication. It's the chipset that's going to make buying 5G phones normal, even if the networks themselves will still take years to materialize in a meaningful way. The reason all of this is important? We finally get to see carriers put their money where their mouths are, because it seems likely every major Android smartphone OEM (minus Huawei) will be using the 865 in their flagship tier (and even some cheaper) handsets.

Those upcoming phones are likely to account for 200 million sales globally in 2020, according to Qualcomm's estimates. To put it in more concrete terms: it now looks very unlikely you will be able to buy the world's most popular Android phone line—Samsung's Galaxy S—without 5G in the USA. That's a big (and quite honestly, kind of sudden!) leap, and I don't think it's one we were expecting to make quite so soon. Various other manufacturers are likely to follow suit with their flagship-tier devices, and by 2021, there will probably be no high-end phones of note without 5G. But before I wax philosophic on larger trends any longer, let's talk about the chip itself.

Full disclosure: Qualcomm paid to fly me and hundreds of other journalists, analysts, and YouTubers out to a beautiful beach resort in Hawaii to learn about its new chipset for the third year in a row. I got to have a lot of overly sweet cocktails and seared tuna. I also had to work a lot so I feel like this all kind of balances out. 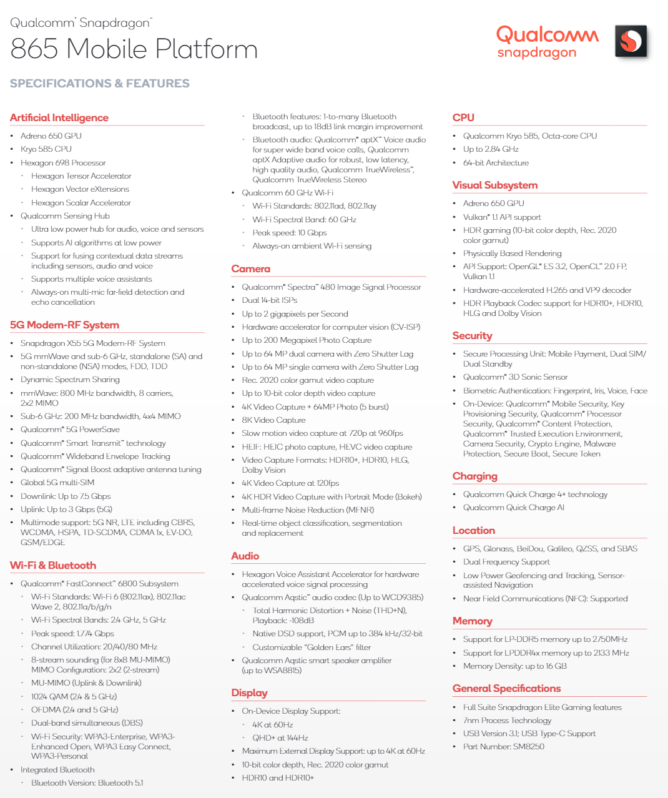 The Snapdragon 865 is the next generation of flagship processor (system-on-a-chip) from Qualcomm, and will likely appear in dozens of smartphones when it launches next year, like Samsung's Galaxy S11. It features numerous upgrades from the Snapdragon 855, most notably, all versions of the 865 will come with support for 5G.

You'd expect Qualcomm to shovel in some big upgrades for what is effectively its first mass market 5G chipset, and you'd be right. While there haven't been any breakthroughs in mobile CPU architecture in the last few years, what we have seen change is the amount being invested into peripheral chipset components. For 2020, Qualcomm has focused most on delivering better on-device AI and camera performance. 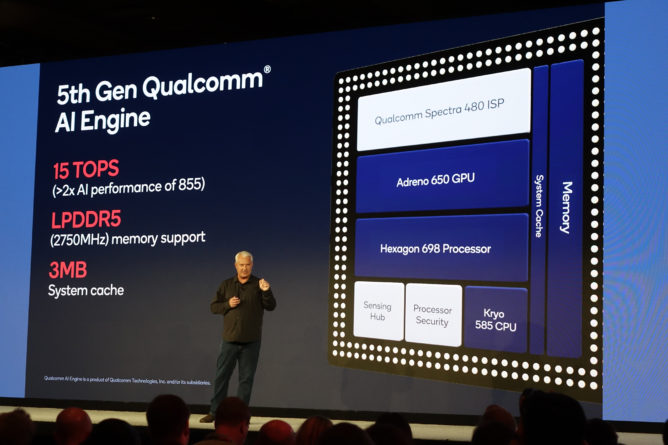 The technical parts of the AI portion are well above my pay grade—I won't claim to understand this stuff. But on a basic level, Qualcomm has thrown much more silicon at the already-quite-powerful Hexagon DSP, resulting in performance gains of 2x (15 TOPS —fifteen trillion operations per second) over the outgoing Snapdragon 855 in some AI-dependent operations. There's now a dedicated Tensor accelerator on the new Hexagon 698 chip, too, meaning native support for operations utilizing Google's open source neural network, TensorFlow. That's likely to have practical implications: you can be assured that a number of Google's own apps utilize TensorFlow libraries for on-device AI functionality (unfortunately, Google has never been forthcoming about which ones). As our phones tackle more and more ambitious problems with tools like virtual assistants, image and object recognition, and turning audio into text (and vice versa), the value of these AI hubs has become more and more clear. Oh, and you now have enough memory to store two assistant wake words on the chip. Get on that, Google. There's also just a lot more bundled memory on the Hexagon chip in general, though Qualcomm declined to provide exact figures.

It's safe to say that one of the most heavily-utilized portions of our smartphones is the camera. With the Spectra 480 image signal processor (ISP), Qualcomm started from the ground up. I'd recommend reading my post about it for a deep dive, but the bullet points are pretty compelling on their own: 40% more efficient, far greater maximum performance, processing bandwidth of 2 gigapixels, 8K30/4K120 video capture (in Dolby Vision HDR), unlimited 960FPS slow-motion capture, and support for up to 200MP still captures. Those numbers are insane. Before today, you basically needed to buy a big, unwieldy specialty high-speed video camera to capture video at 120FPS in 4K. Your phone is going to be able to do that now. Bonkers.

CPU and GPU get sensible upgrades, but not leaps forward 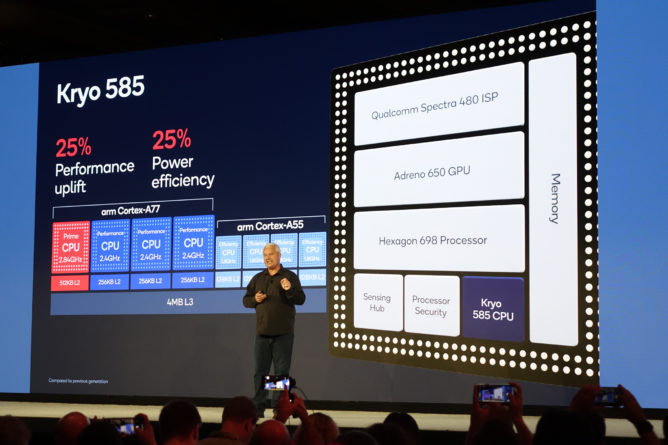 If you're like me, you're probably waiting for the news on the GPU and CPU front at this point. And, dear reader, I suggest not setting your hopes too high: we simply aren't seeing the kind of big leaps forward on these pieces we have in the past. That's not to say there's nothing here, though. Qualcomm has switched its "big" quad core cluster to ARM's new A77 CPU design, which provides a maximum performance uplift of 25%, or similar performance to the outgoing Snapdragon 855 while operating 25% more efficiently. Qualcomm is sticking with its "prime" core design, as well, meaning one of the four big cores is even bigger yet. Qualcomm is sticking to the same L2 cache arrangement it had last year (512KB of L2 for the 2.84GHz "prime" core, 256KB for the other three at 2.4GHz), but it's doubled the L3 cache, from 2MB in the 855 now to 4MB in the 865. The "little" cores remain the same: four A55s at 1.8GHz. 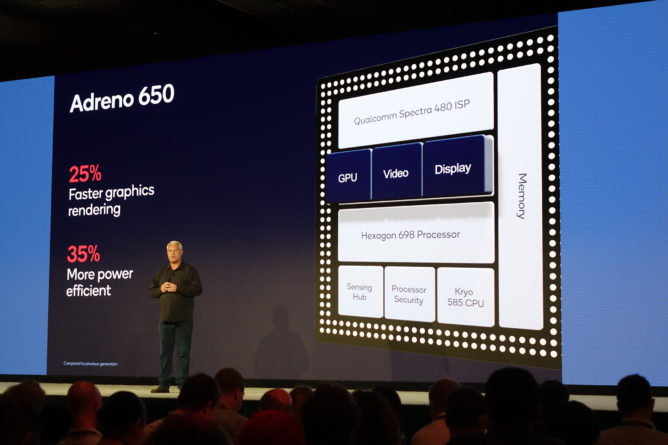 On the GPU side, Qualcomm has historically been pretty tight-lipped about its graphics architecture, and that's not changed with the Adreno 650 GPU in the Snapdragon 865: it's 20% faster, and 35% more efficient compared to the outgoing Adreno 640. The big story with the GPU is drivers: Qualcomm is officially making them modular and will distribute Adreno GPU driver updates to phones via the Google Play Store. What's that mean for you? I'm working to find out more, but in short: expect your phone's GPU to get updated on a cadence more like your desktop PC's. That means quicker fixes for issues with popular games, optimization updates for new releases, and maybe even new features down the road. Qualcomm also talked up support for some ray tracing-style lighting libraries, but it's up to developers to support these much more than it is Qualcomm, and Apple tends to decide what GPU features mobile developers support anyway.

On the subject of memory, the Snapdragon 865 is the first chip from Qualcomm to support the nascent LPDDR5 standard, which is theorized to provide significant efficiency improvements along with a marginal boost to memory bandwidth.

5G is kind of why we're here

Finally, let's talk 5G. No, owning a 5G phone is not going to change your life or Enable New Experiences(TM), at least not for a good, long time. But for as much as some might call me a skeptic of the next generation of mobile networks, I'm still not blind: they're absolutely coming, and they will be important. They may just... take a while. That said, how critical it is that we'll be getting 5G in mainstream smartphones next year is hard to understate. It's what's going to motivate carriers to put the pedal to the floor on building out these networks, because generational wireless shifts like this one are absolutely responsible for major rebalances of power in the industry. If T-Mobile and Sprint's merger is approved, it could quite possibly become the largest mobile operator in the US. Sprint's unique advantage with its nationwide 2500MHz mid-band holdings give it what will easily be the biggest leg up on 5G, and could do serious damage to AT&T and Verizon's subscriber numbers. But let's get out of the business of business: what's this chip able to do with 5G?

Qualcomm's big talking point is a peak download speed of 7.5Gbps (for the record, that's nearly 1000MB/s, and your phone's storage can't even write that fast). That number makes for a good press release, but it's largely irrelevant to you and me: it depends on a highly advanced millimeter wave network configuration that doesn't even exist in the wild yet. It's a big, fun number, though.

What really matters is band support, and the X55 modem (which Qualcomm already announced) is—and this isn't the free Mai Tais talking—easily the most powerful and advanced 5G chip out there in this regard, bar none. Now, that doesn't mean a whole lot when most of the 5G networks that even exist aren't leveraging anywhere near the diversity and performance this modem can handle, but it does mean it can be configured to work on pretty much any and all of them. While 5G will cause a much bigger mess in terms of the number of bands and networks we'll see, the X55 does actually promise to be pretty future-proof in that regard. Sure, more advanced network features will eventually come to 5G and the X55 won't support some of them, but X55 phones should age into the growth of our early 5G networks well. Unlike Qualcomm's X50 (frankly, little more than a testing platform that went to retail), the X55 has no limitations regarding TDD/FDD networks, and fully supports 5G standalone (5G SA) operation.

What's all that mean in plain English? I'd say the X55 modem is the first "complete 5G package" on the market. If a carrier wants a 5G handset, a manufacturer should feasibly be able to provide one that is compatible with its full suite of technologies, be they sub-6GHz 5G, mmWave, non-standalone, or standalone networks. And to be clear: not every X55 phone will support every 5G frequency. That's down to the choice of the manufacturers and carriers, who are likely to use and abuse their power to keep customers from easily switching networks or importing devices from another region.

There's also the stickler issue with millimeter wave support, which is not inherently included as part of the Snapdragon 865 package. While all X55 modems will support mmWave connectivity, you still have to actually put the antennas in the phone, and that requires designing a phone that can accommodate mmWave modules (and adding that component to the cost of building the phone). So far, only Samsung has built such handsets. Manufacturers are likely wary of adding mmWave support: it comes at a real design cost, all for the sake of supporting a technology unlikely to achieve widespread penetration for years. I imagine that, globally, the vast majority of Snapdragon 865 devices won't support mmWave at all, because there will be very little reason to have a mmWave phone outside the United States or Korea for the foreseeable future. And even in those countries, mmWave is still a pretty hard sell.

All in all, though, the Snapdragon 865 does make it clear that 5G is, finally, here. And I think that's a big deal. But when 5G will be in your "here" is another question entirely, and one out of Qualcomm's control. 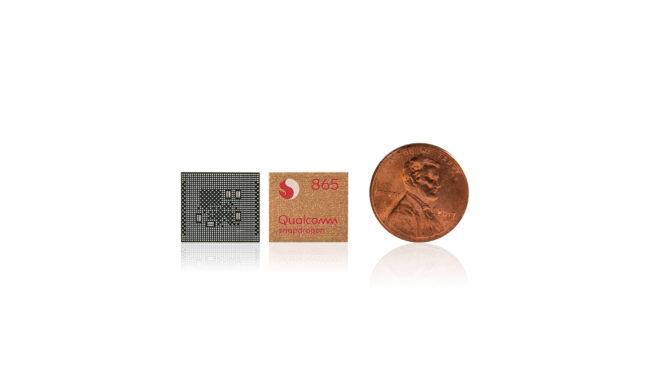 Galaxy Note10 Lite and S10 Lite appear in renders, may arrive at event this month

Android phone cameras could become a whole lot faster in 2020