Google Tasks sometimes feels like an afterthought, shoved into the sidebar at sites like Google Calendar and Gmail. If you rely on its to-do list functionality, but you'd like something with more of a standalone feel, a new Chrome extension turns Google Tasks into its own full-screen thing. The aptly named "Full Screen for Google Tasks" gives you a bigger and better interface that Google should have provided in the first place, though it isn't perfect. 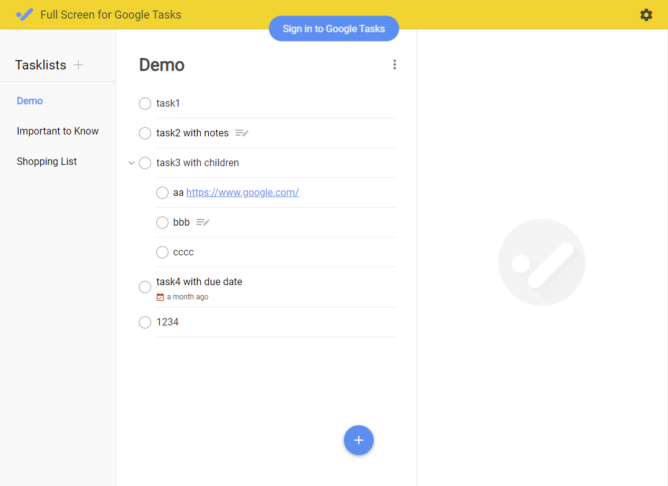 The setup process is simple. Just install the extension from the Chrome Web Store, fire it up via the shortcuts it adds, and follow the prompts to sign in to your associated Google account. The extension doesn't have any superfluous permissions, merely requesting to "create, edit, organize, and delete all your tasks." Once granted, you'll be thrown into a three-pane interface for Google Tasks.

The leftmost pane is for your individual "Tasklists," previously accessible in Google Tasks via the drop-down "My Tasks" menu. The middle pane shows the current task list, itemized as you had them listed in Google Tasks, including details like due dates and nesting. The right pane shows the details associated with each task as they are selected. In all, the extension's organization is more like what we wish Google would provide, giving a logical flow from major to minor categories from left to right, but actually using the extension immediately brings out its few shortcomings. 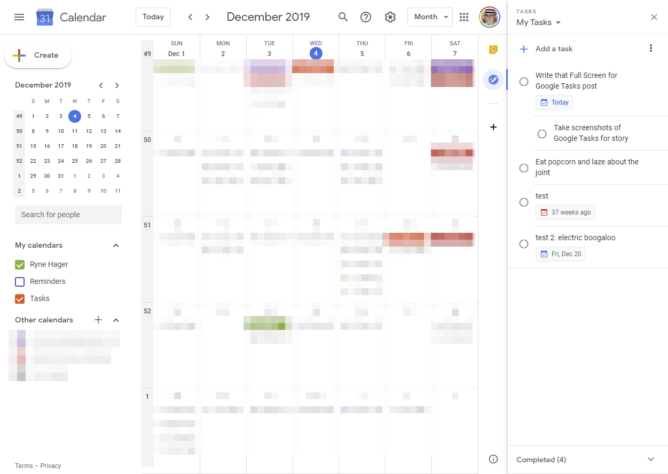 Above: Tasks in the sidebar. Below: Same tasks in the Full Screen for Google Tasks extension. 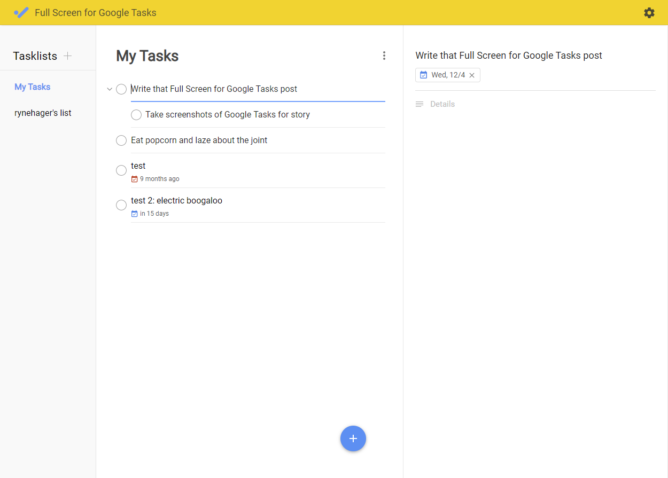 For one, once you start interacting with the items on the list, there's no easy way to exit what I think of as the "selection" mode in which you have a task actively selected for view on the rightmost pane. Clicking outside a task or the tasklist doesn't take you out of this mode (as it does in the sidebar version), nor does hitting enter or escape when you've finished creating a new task (enter, in fact, creates a new blank task). Only changing lists in the left tab clears you from the selecting mode, and since the only difference between the task "editing" mode and "selection" modes are the thickness of the blue line beneath items, it isn't always clear what you're currently set to do.

Another minor nitpick is that I expect the floating action button to offer task types, like tasks with due dates or sub-tasks, but it simply drops you to editing a bare-bones "basic" task. To add details like due dates, you have to do it in an extra step via the task view in the right pane. Even the Android Tasks app offers to add a date via an icon in the item creation field itself, and the sidebar version in G Suite apps has a one-click shortcut via the pencil/editing icon to add those details. It's a minor point, but I'm used to these "new item" floating action buttons offering options when possible, so it feels like a bit of an omission here. I also ran into an odd issue with to-do task titles not always synchronizing from the Full Screen for Google Tasks extension and the sidebar-integrated version, and completed items are sort of hidden inside the three-dot menu, rather than given an easy shortcut as in the sidebar version.

The biggest problem, though, is the fact that the extension can't add details like precise times for due dates, and can't make recurring tasks. As noted by About Chromebooks, that's an API limitation, as third-party apps don't get the same degree of integration that Google's first-party products do. It's not a fault of the developer, Google needs to open things up more.

Still, if you're a heavy user of Google Tasks, and you've been wanting a standalone site or client to use with it outside your phone, you might want to consider giving this extension a try. At a minimum, it does provide an interface that makes it a bit easier to stay organized, even if it's missing a few things, though keep in mind that the extension does have access to all your Google Tasks data. If you're paranoid about security, you might want to stick with first-party tools.

Android phone cameras could become a whole lot faster in 2020