Netflix users are probably familiar with the "Smart Downloads" feature that allows your device to automatically pull down the latest episodes of shows you watch, just in case you end up with a hankering for some TNG or Great British Baking Show later when data is harder to come by. Supplementing this existing feature, we've spotted a new "Downloads For You" feature that expands that functionality to shows and movies you haven't watched yet. Paired with that, the Playback Specification diagnostics screen and in-app brightness controls are also rolling out more widely.

The new Downloads For You appears in the Downloads tab (left), all the way at the bottom, with the customized downloads then appearing in a new section in that tab (right) once configured.

Again, if you're familiar with the Smart Downloads feature, you should have the basic idea down. In short, once you enable the Downloads For You feature, the Netflix app will automatically pull down content it thinks you'll enjoy but haven't watched yet, up to whatever storage limits you set. By default, it offers to consume an additional gigabyte of space, but you can configure it to use more.

When it has been set up, the new content appears in the Downloads tab in a new category just beneath your other Smart Downloads content. 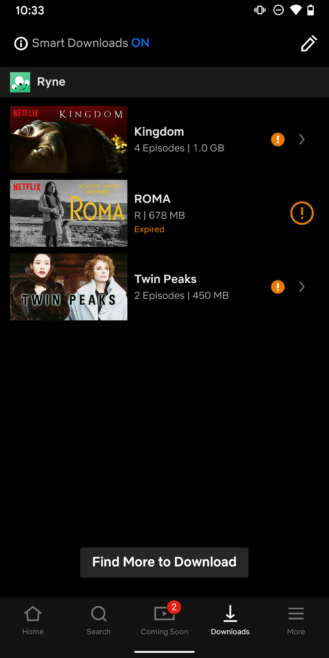 Note that the look of the Downloads tab itself changes a bit with this new feature, featuring much larger cards for shows that can expand to show individual downloaded episodes. In the case of Downloads For You content, they also include brief descriptions of each show, plus genre and other category information.

Left: You may get a prompt for the new feature, but it appeared on my device without one. Middle: The usual ongoing download notification shows progress when pulling down new content. Right: The extra settings for the new feature.

You get the same ongoing notification that you would for other downloads while the new feature does its thing, and the Netflix app notes that it will only pull down content while you're on Wi-Fi, so there's no risk blowing through your whole data allotment pulling down backup media. A pile of new customization options for the feature also appear in the Smart Downloads settings (accessible at the top of the Downloads tab), allowing you to individually allocate storage on a per-user basis — for all the different Netflix profiles you definitely aren't sharing with all your friends.

We aren't sure when Netflix might freshen this automatically downloaded content, or if it will at all. Unlike Smart Downloads, it isn't as explicit regarding longer-term behavior.

We haven't localized which version of the app this feature might be tied to, or if it's controlled by a server-side switch/flag, but we've spotted it on two devices running the latest beta version from the Play Store (7.38.0 build 17 34627).

A Playback Specification pane in the diagnostics section of Settings, spotted intermittently over the last month or so, is also rolling out more widely. It appears in the More tab -> App Settings -> Diagnostics. With it, you can see device-specific settings for playback, like if your phone or tablet is recognized as HDR-compatible, which codecs its supports, and the maximum playback resolution you'll see. Based on the reports we've received, the information presented in the Playback Specification page may not always be accurate, though: We've seen Pixel 3 XLs report being both HDR compatible and non-compatible, though Netflix should support it. 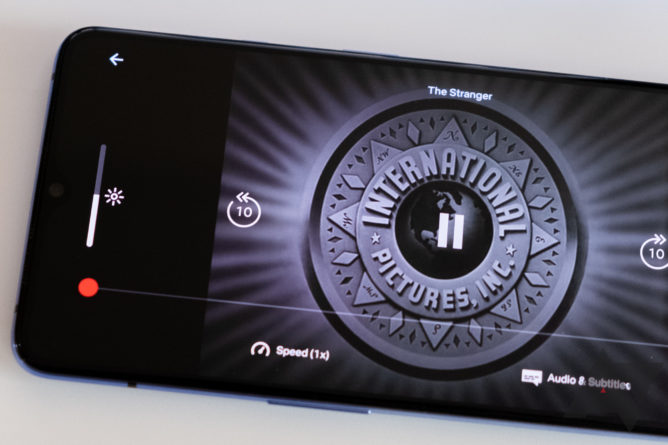 Note the new slider on the left.

In-app brightness controls are also rolling out, bringing a new slider (visible on the left above) that allows you to increase or decrease brightness without having to pull down the quick settings shade. It's a bit laggy, ramping your brightness up or down at its own slow pace, rather than immediately adjusting to the setting you select, but that's probably better for your eyes anyway.

Again, we don't know which version of the app either of these features might be tied to, and our experiences vary, though all three were present on the latest beta release for me. You can try your luck pulling it down through the beta testing program on the Play Store.

Genius sues Google over anticompetitive use of its lyrics (Updated)