One of my consistent complaints with most smartphone cameras is performance. While I'd personally single out Google's Pixels as among the worst, I think it's fair to say that most phones experience significant speed degradation in the camera as they age. I'm not going to claim I understand why this happens—a multitude of factors could be at play—but I do think on some level you have to look at hardware. And with Qualcomm's new Spectra 480 ISP in the Snapdragon 865, it sure looks like we're about to take a generational leap when it comes to imaging performance.

For background, the ISP (Image Signal Processor) is the "brain" of your smartphone's camera. It's a dedicated piece (really, pieces) of hardware responsible for taking data from your camera's imaging sensor and translating it into the visible product that comes out the other end on your phone's display. That means taking all of those millions of pixels, then capturing and processing them into photos or videos. As our phones pack more and more cameras and we ask them to do more and more things, the ISP has rapidly become one of the most important components in your smartphone. When it can't wake up our phone's camera in time to capture a candid moment (or the shutter simply takes too long to snap), it's rightfully frustrating. If you shoot a 4K video and the first 10 seconds are a stuttery mess, it can make the whole clip feel like a wasted opportunity. 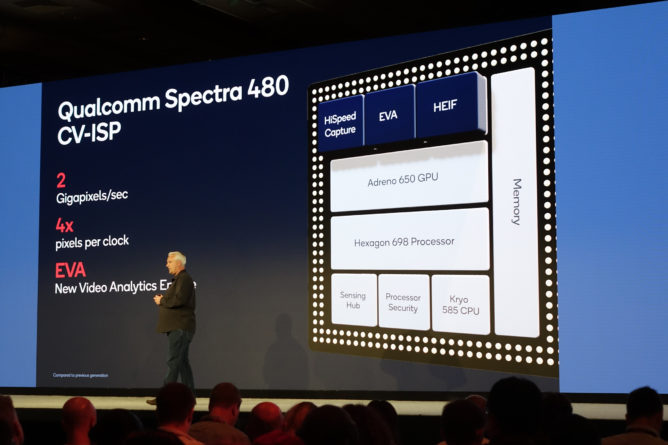 Qualcomm's newest high-end ISP doesn't promise to end these experiences (and given some of this is also probably down to software, that seems wise), but I'm confident it's at least going to start mitigating their severity. Qualcomm is promising over a 40% increase in image processing performance over the outgoing Spectra 380 (peak performance is 2 gigapixels per second), and it's thanks to a completely rearchitectured design. Whereas Qualcomm's ISPs in the past have been able to process just one pixel per clock cycle on the ISP, the Spectra 480 can process four pixels on each cycle. This also makes it much more efficient: the 480 can operate under drastically lower power while offering comparable performance to the previous generation ISP. It also enables pretty crazy new use cases: Snapdragon 865 phones will have hardware capable of capturing 4K HDR video while also being able to shoot 64MP stills mid-recording. Sensor resolution now tops at 200MP, and support for 8K (yes, you heard that right) video capture is baked in. Snapdragon 865 phones will also be the very first consumer devices certified to capture Dolby Vision HDR video (granted, no Dolby Vision capture equipment technically exists, because Dolby until now didn't offer such a capability).

And if that doesn't impress you, I think I've got some figures that will. Spectra 480 will enable Snapdragon 865 phones to capture at 4K120FPS, for the first time offering regular consumers a way to shoot 4K slow-motion video (until now, you basically had to buy a professional high-speed camera). On top of that, 960FPS slow motion at 720p will no longer be time-capped on Snapdragon 865 phones, meaning you can shoot such footage continuously. Right now, most phones don't even allow you to record at 960FPS long enough to capture a moment unless it's perfectly timed.

Of course, there's no guarantee every one of these features will come to every Snapdragon 865 phone. That's the choice of the phone manufacturer. Right now, Snapdragon 855 phones can capture 4K60 HDR video in theory, but in practice, many phonemakers have simply disabled these features. Qualcomm has quietly expressed frustration over this, less-than-subtly asking journalists to inquire with the company's partners as to why consumers wouldn't be given access to these powerful capabilities (the answers, I suspect, are storage and playback compatibility). I wouldn't expect too much change in that department in 2020, personally: essentially nobody owns an 8K TV, though 4K TVs with HDR and 120Hz refresh are on the rise.

As with any new hardware component announcement, the proof will be in the pudding: we'll see the first Snapdragon 865 smartphones early next year, with a retail debut likely coming in the form of the Galaxy S11 family. But on paper, Qualcomm has a lot to hype here.

The Snapdragon 865 is the most important smartphone chip in years—and it packs some serious ...