ZeptoLab is a famous mobile game development studio thanks to its casual arcade series Cut the Rope and its many spinoffs. The last monumental release from the company was CATS: Crash Arena Turbo Stars, though it would appear that the developer is going back to its roots with a new testing release titled Om Nom: Merge, though we're not too sure exactly where it's being tested other than in Brazil. This means the majority of Android users will not be able to play just yet. The game appears to offer a twist on the classic 2048 formula, where you'll combine Om Noms to create new characters for the purpose of eating fruit so that you can earn in-game currency. After testing the title personally, I can confirm it's an extremely casual game most likely designed for younger audiences.

Above is a gameplay video for Om Nom: Merge that I found on YouTube, and it was published by the channel AndroidType. Normally this is where I would link a gameplay trailer, but sadly there doesn't appear to any official media out there. As you can see in the short video, the gameplay revolves around combining adorable creatures to create new characters. The higher the tier of the character, the more in-game currency you'll earn as they eat the fruit at the top of your screen. It's a rather basic setup that should be suitable for all ages, and the adorable graphics are definitely pleasing, but I can't help but feel that this is an extremely shallow title, much like an idle game, which is probably why you can earn in-game currency if you're not even actively playing the title.

Right off the bat, you are forced into a tutorial that explains the gameplay, but luckily this doesn't last too long. One thing that did get on my nerves was the constant assault of notifications while playing. Things are popping up on the screen the entire time, usually pushing you towards watching optional advertisements. Hopefully, this is addressed before the official release, but let's just say I won't be holding my breath.

Since Om Nom: Merge is a new listing on the Play Store that's currently available in Brazil, so details are rather light. What we do know is that the game is free-to-play and that it includes advertisements and in-app purchases that range up to $99.99 per item, though these IAPs are not active yet. As far as a release date is concerned, there's currently no information available. 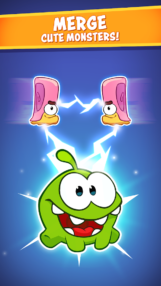 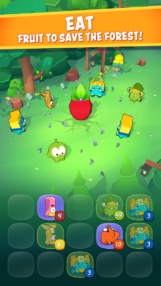 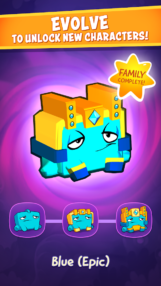 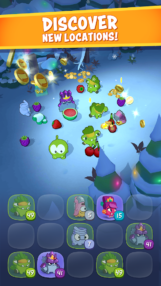 I have to say it is nice to see that ZeptoLab is going to offer a new release in the Cut the Rope franchise sometime soon, even if it is a spinoff title. While the gameplay is a little lacking, the design is cute, and I can see how children could easily enjoy this title and its simple mechanics. Knowing that this will be a free-to-play release that contains exorbitant in-app purchases is a turnoff, but I suppose it's hardly a surprise. So yeah, it would seem that the majority of mobile gamers out there won't be able to check out Om Nom: Merge today unless they hunt down the APK or happen to live in Brazil, but at least we know something new is coming and that ZeptoLab is still hard at work bringing new Cut the Rope spinoffs to the Play Store. 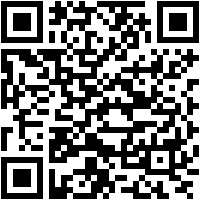 Om Nom: Merge is officially available on the Play Store

As you can see in the tweet above, ZeptoLab officially announced the release of Om Nom: Merge over the weekend. As I detailed in the article above, Om Nom: Merge offers a cutesy take on the combination mechanics found in titles like 2048 and Threes, though it mainly plays like a casual idle game. So while the adorable graphics and easygoing gameplay should appeal to children and adults alike, if you're looking for a game with depth, this isn't it. At the very least, Play Store reviews appear to be pretty positive, so if you're looking for a casual merge game that sports charming graphics and approachable gameplay, Om Nom: Merge is now officially available on the Google Play Store.