Google's new gesture navigation system for Android 10 has been divisive for numerous reasons, not the least of which it didn't work with third-party launchers. The company committed to fixing this issue in a future Android release, and it appears that fix is already live on the Pixel 4 and 4 XL (Update: And all Pixels excluding the 2016 models, as of the December patches). Launchers like Nova can use the full gesture setup, so that's one shortcoming out of the way.

Previously, attempting to turn on Android 10's gesture navigation with a third-party launcher enabled would produce an error message, which you can see below. You'd have no choice but to use the two-button or three-button version if you wanted to use Nova, Action Launcher, or any of the others. 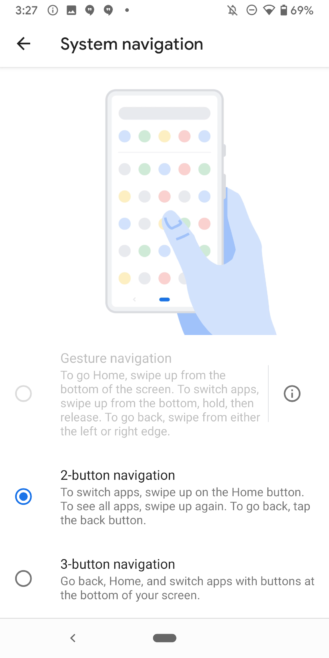 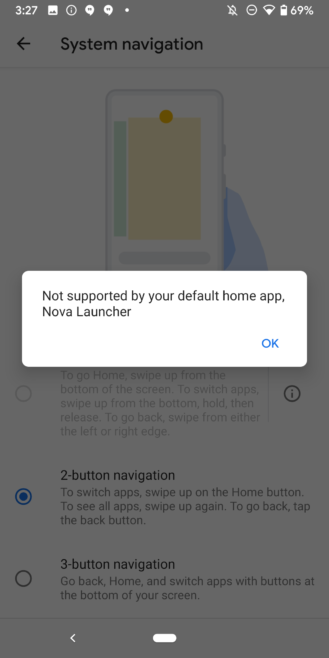 Kevin Barry, the developer of Nova Launcher, was one of the loudest voices objecting to Google's decision to move forward with gesture nav sans support for third-party launchers:

You can read Google's official statement about full system gestures not working with any 3rd party launcher. This is 100% on Google's end and has been for months. It's up to Google to fix it in a future update of Android 10. https://t.co/CpNglax9Mx pic.twitter.com/UXh3saZnr7

Here's what he told Android Police about this development:

We're thrilled to hear that Google is now supporting gesture nav for third party launchers. We appreciate the communities persistence in asking Google for this. I'm looking forward to testing and using this when I get my Pixel 4.

We're hoping to see Google quickly roll this out to devices that have the initial release of Android 10, either through Project Mainline or the next security update.

We also reached out to Chis Lacy of Action Launcher who provided the following statement:

It's fantastic to see the Android team have made good on their promise to bring gesture navigation support to third party launchers with the Pixel 4. Here's hoping this update will roll out to existing Pixel devices in short order.

I'll continue to cross my fingers and toes that device manufacturers will ensure their upcoming Android 10 updates also support third party launchers from day one. Here's hoping that Android 11 will see the Android team offer ways for third party launchers to offer full feature parity with the system launcher as it relates to gesture / recents integration and the like!

This also means you'll be able to use the new Assistant (which requires gesture navigation) while using an alternative launcher on Google's latest phones.

Works on older Pixels as of December 2019 update

We have confirmed that gestures are now working for older Pixels in third-party launchers as of the December update, though it is not working for the original 2016 Pixel XL (possibly a result of the older numerical build the 2016 Pixels are running with the December patches).