If you're after a Motorola phone with just a bit more gusto than the $150 G7 Play, the Z3 Play has also been discounted for Black Friday. It's currently just $219.99, marked down from its regular price of $399.99. It's arguably an even better deal than the G7 Play for just a bit more money.

The Moto Z3 Play is equipped with a 6.0" 1080p AMOLED display, a Snapdragon 636, 4GB of RAM, 64GB of internal storage with microSD expansion, a dual 12MP + 5MP rear camera setup, an 8MP front-facing camera, and a 3,000mAh battery. It also includes a Power Pack Moto Mod, further extending the battery life capabilities. Being a Prime Exclusive phone, it has Alexa and a bunch of pre-installed apps from Bezos, Inc. 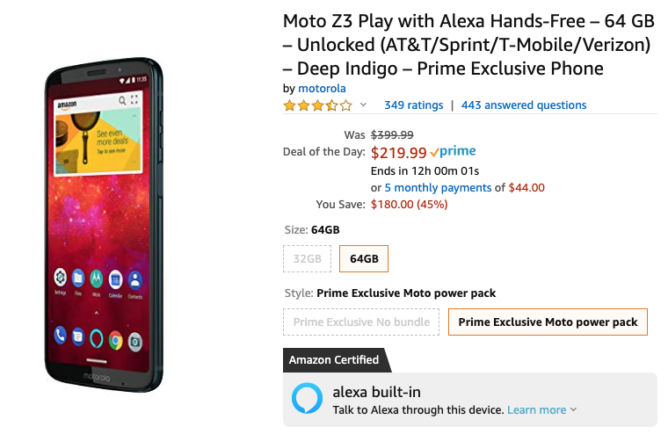 As with all of Amazon's Black Friday deals, this $219.99 price expires in about 12 hours as of publishing time. If you only have around $200 to spend on a phone, this is a fantastic deal.

The very best deals on Chromebooks for Black Friday