If you're looking for a decent budget phone, the Moto G7 Play might be something you want to look into. Regularly priced at an already affordable $199.99, the G7 Play in Amazon form is now $149.99 for the next 12 hours.

The Moto G7 Play sports a 5.7" 720p display, a Snapdragon 632, 2GB of RAM, 32GB of storage with microSD expansion, a 13MP rear camera, an 8MP front-facing camera, and a 3,000mAh battery. As with all Play phones, the G7 Play is built for battery life, which is probably why such a low-resolution display is on board. This is the Amazon variant, which means it has Alexa and several pre-installed Amazon apps. 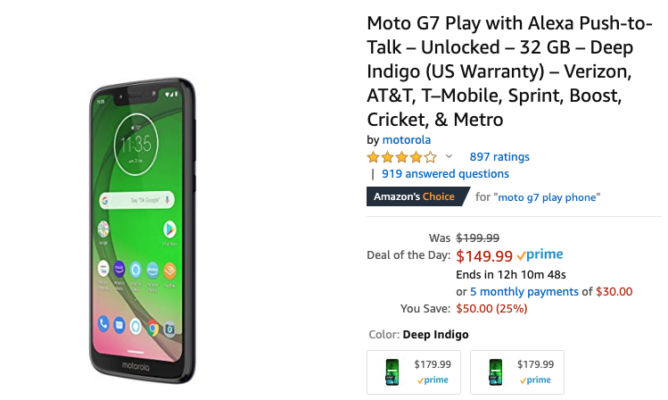 This $149.99 price is the lowest we've ever seen. Sure, it probably won't appeal to most of you, but if you're shopping for someone who just wants a newer phone with great battery life, this is a decent option. The deal expires in a little over 12 hours as of publishing time.

Save up to 40% on Aukey earbuds, chargers, and power banks this Black Friday