Your Twitter follower count might take a nosedive next month. That's when the company says it will begin a purge of inactive accounts, ostensibly because it needs people to agree to its new privacy policy. However, it will have the added benefit of freeing up usernames.

Twitter began sending out email notifications this week, warning users they need to log in before December 11th. Another reminder email will go out closer to the deadline. After that, Twitter will start nuking unused accounts, focusing first on accounts outside the US. The purge will eventually reach all corners of the world, though. It will even include the account of those who have passed away, unless someone knows the login details. 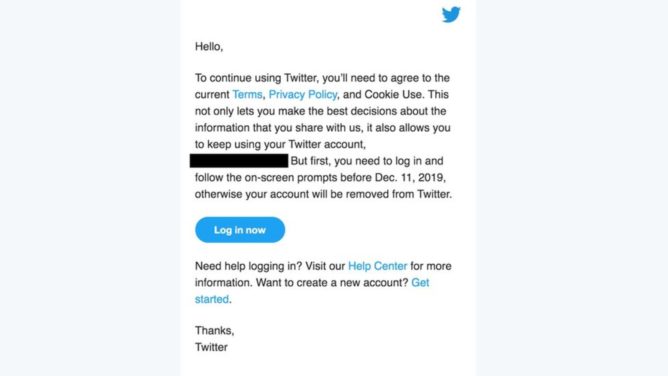 If someone does come back to keep their account alive, they'll have to follow the on-screen prompts to agree to the new privacy policy. Twitter frames this as a necessary step to ensure users make the best decisions about the information they share with Twitter. Although, Twitter is probably happy to have an excuse to release all those usernames, too. This move won't change Twitter's reported user numbers, though. That count (currently around 145 million) only includes people who are daily active users.

In response to all the feedback it received following this policy's announcement, Twitter issued a series of tweets clarifying the situation. The company said it has always had an inactive account policy but never enforced it. It will begin applying it in the EU to follow the GDPR and may later expand it to comply with other regulations around the world. As for the impact this would have on accounts of deceased people, it admitted it missed this angle completely and promised it won't deactivate any accounts until it puts in place a way to "memoralize" those who belong to dead people.

Some Stadia pre-orders were incorrectly canceled, but Google is starting to replace them (Updated)