Many of the Stadia Founder’s Edition preorders were canceled en masse days before the gaming service’s hyped debut on Tuesday. A fault in Google Store’s payment gateway initially put some orders with the limited-edition package on hold, but the issue was further aggravated when the troubleshooting steps also failed. In no time, Stadia’s subreddit was swarmed by affected buyers going on about the entire episode, which finally helped grab Google’s attention.

The widespread issue appears to be caused by payment methods failing months after orders were placed. Google Store sensibly notified affected buyers about their pending orders via an email that required them to update the payment method within seven days. This is where things got messy. Trying to update these bank details resulted in canceled orders in most cases, while only a few were able to fix billing details for their held orders.

Google and PayPal’s proactive fraud detection is believed to have wrongly flagged these orders, preventing the payments from going through. It took a few hours for Google to acknowledge the issue and an ensuing Reddit post from Stadia staff assured the affected customers of a resolution. The Google Store support team has since been filled in with new information and contacting them is your best bet right now. We aren’t sure if anyone got their canceled order reinstated, but some have been suggested to expect an update on the situation within two days.

Some affected users are receiving an email from the Google Store with a link to order a replacement Stadia Founder’s Edition bundle. As noted in the email, the order page can only be accessed by those who got their preorders mistakenly canceled days before the service’s launch. You will have to use the same email address that was used for placing the original order, and you have until December 16 to get one of the limited-edition packages. 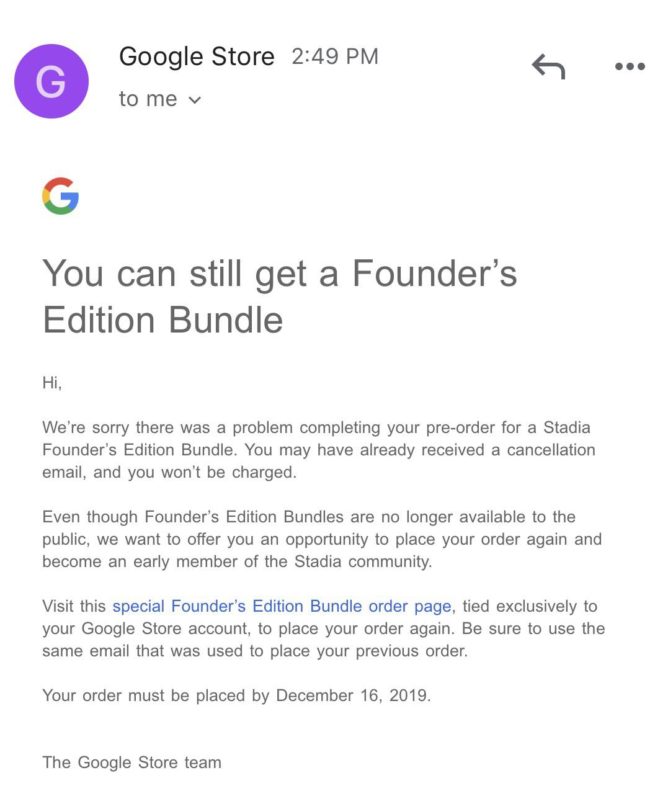 Many users affected by this pre-release debacle still haven’t received any communication from the Google Store. A Redditor suggests contacting the store’s support team to get the email with a reorder link.