Current microSD cards have become unbelievable dense and cheap compared to earlier models, and during Black Fridays, they become even more affordable. The same is true for SanDisk's new Extreme series, consisting of variants ranging from 32GB to 1TB. Most of them are at all-time lows this Thanksgiving, and you can even purchase them in a bundle with a card reader at Amazon. For example, you can get the 1TB for only $200 ($250 off), which is a significant saving even compared to an earlier deal from a fortnight ago.

There aren't too many phones left with microSD slots, but the ones that have one can drastically expand available storage these days. SanDisk in particular made a name for itself as a provider of affordable and fast storage, which is also true for its Extreme series. The manufacturer touts that it achieves read speeds of up to 160MB/s and writes data at up to 90MB/s, but the cards are still not very good for apps — you'll be happier if you only use these as an additional media storage only in your phone. 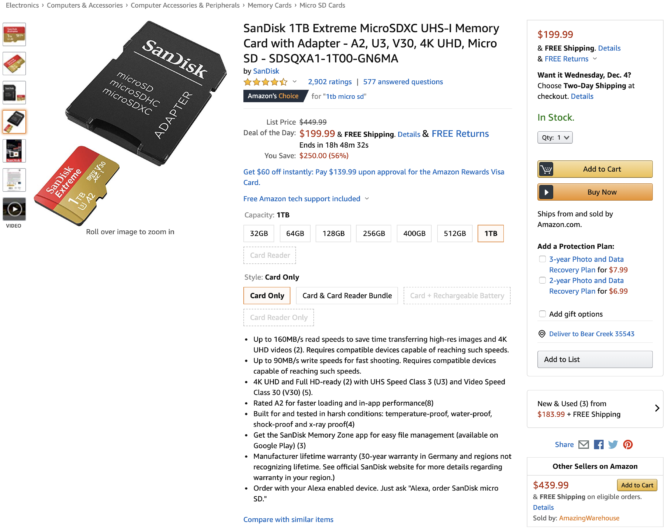 Note that we've seen some of these prices before — the 64GB, 128GB, and 256GB versions in particular were offered at this all-time low price earlier. If you didn't snag up one of those the last time around, this is your chance. Amazon states the deals are live until midnight PST, but there's no word on how long they'll be there at other retailers.

Don't forget to check out our Black Friday roundup post for even more deals.