The A10e has gotten around the carriers as a leaner version of the more popular mid-ranger, the A50. It's got a 5.8" display with fairly good surface coverage, 32GB of storage, and a 3,000mAh battery. No army of cameras, just humble front and back units to do what you need. It's no screamer in the performance department, either, but you'll be able to use it at your carrier of choice in the U.S. 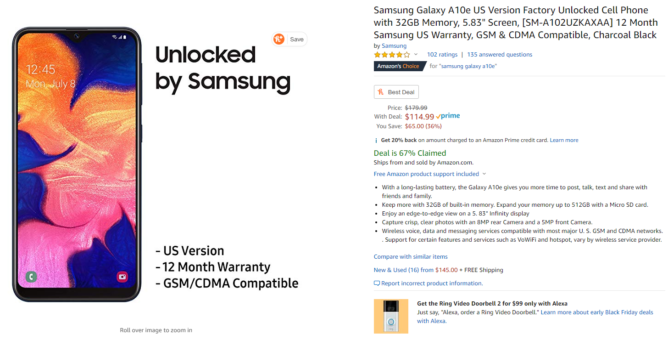 Usually selling for $180, Amazon has it down to $115 right now in a Lightning Deal. You'll also get 20% of the cost back if you place it on an Amazon credit card. Catch one soon — as of publication time, more than two-thirds of the available stock has been claimed.

All discounted stock has been claimed. Buyers are being encouraged to join a waitlist for more units. The lightning deal ends at midnight PST.

Sonos Black Friday deals are live: 20% off the Beam, Playbar, and more

Moment Holiday Sale is live with up to 40% off on cases, lenses, and tons of other gear