A few months ago, Google Photos product lead, David Lieb, told us that manually tagging faces was on the app's update roadmap. We didn't hear anything about the feature until last week, when XDA developers managed to find it hidden inside Photos v4.32 and enable it. Now, it's going live for some users, though there's an important asterisk to keep in mind.

If you were hoping that the feature would allow you to point at any area in an image and add a tag to it, you will be disappointed. Face tagging still relies on Google's algorithm and its ability to detect a person or pet's face to begin with. So if you have part of a face, a silhouette, a weird side angle, or any other photo where a person shows up but their face isn't immediately recognizable, you can't tag them. 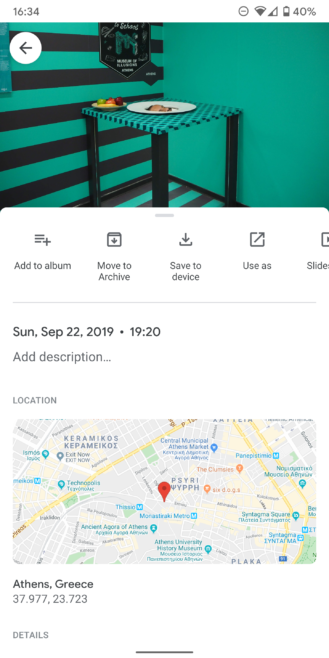 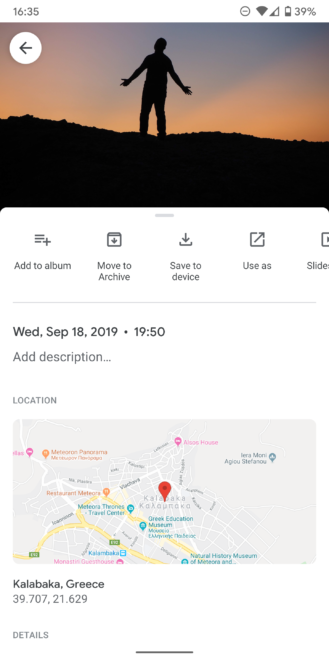 You can't manually tag an image where Google hasn't detected a face.

With the previous limitation in mind, it's easy to understand that manual tags only work when Google detects a face in a pic. Whether the face is linked to an already-created people profile in Photos, or it's a newly-recognized face whose pics haven't been grouped yet, you can access the feature and either edit, name, or add a new tag.

How to manually tag a face

Open Google Photos, look for any pic with people or pets in it, and swipe up or tap the overflow button (three dots) on the top right. This brings up the updated EXIF panel with the People section, recognized persons' avatars, and an edit icon (pen) on the right. If you don't see the pen, the feature hasn't rolled out to you yet; and if you don't see the People heading, Google hasn't detected a face in that particular image. 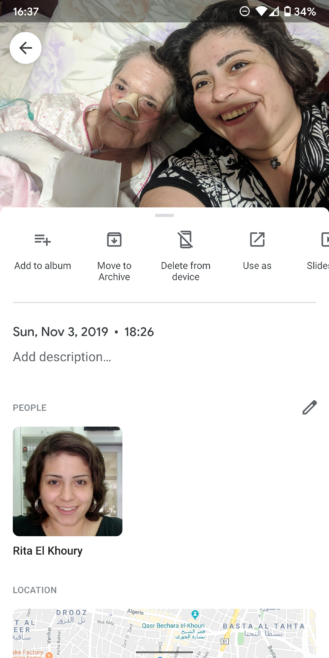 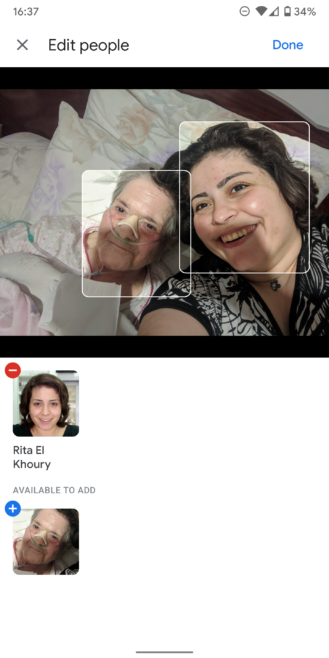 Left: Only my face is tagged... Right: ... but my grandma's face was detected.

Tap the edit icon and you'll get to a screen with the photo on top, thumbnails of tagged people underneath it, and faces that are Available to add below that. Choose the untagged faces, either by tapping them on the image or in the thumbnails and you'll be able to add them to an existing person's group or create a new one with the plus sign on the top right. 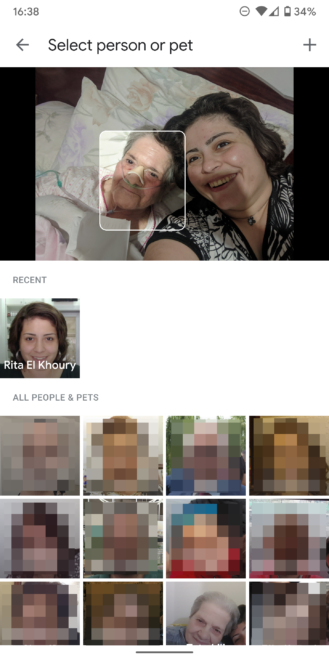 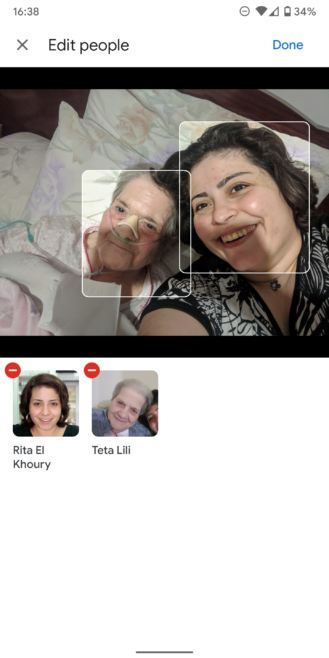 There are a few benefits worth discussing here:

How to edit a tagged face

The clear advantage of this feature comes into play when you realize it allows you to un-tag and re-tag a face as you wish. Those of you who have pics of twins, similar pets, or children that look alike will be very happy to know they can finally fix any wrong tags this way. Time to start digging through your thousands of photos and cleaning things up! However, we don't know if doing so will improve the facial recognition algorithm and help avoid more confusions in the future. 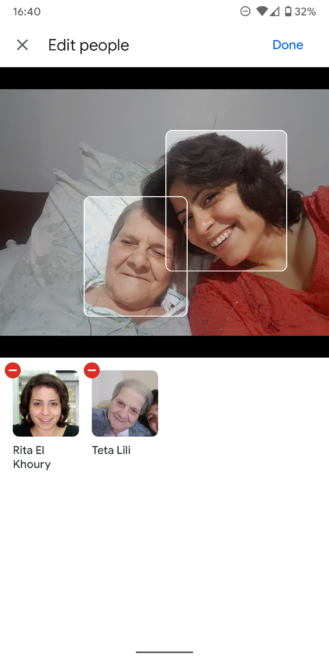 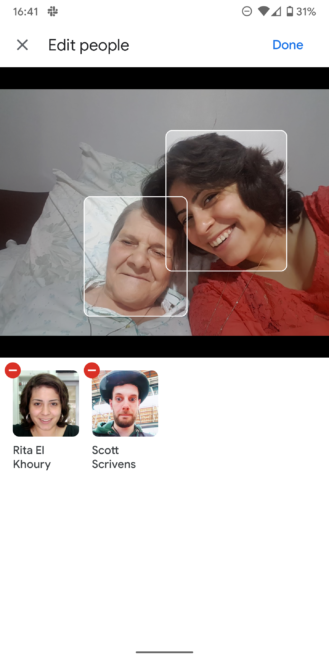 I tagged my grandma as Scott. Alternate caption: This is what Scott looks like without make-up.

Another fun side-effect of this feature is the ability to quickly tag all mirrored instances of the same person in a pic. In the example below, Photos had properly recognized me in the middle, but failed to see that I was the same person, though multiplied all over the pic. I quickly assigned all thumbnails to my face to avoid having an errant profile of me in Photos based on those images for no reason. 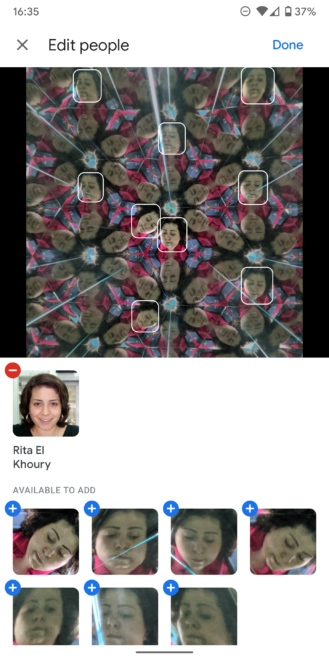 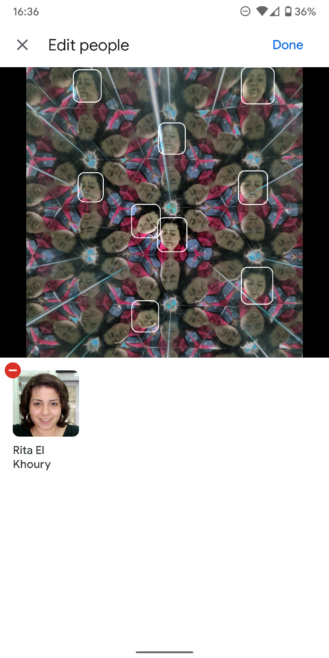 If one Rita isn't ridiculous enough.

A good way to show and remove hidden faces

When you attend a public event and take pics, odds are you'll end up with tons of profiles in Photos for passersby and background people that weren't the main subject. The same might happen if you're taking pics of static objects, like a statue or a photo of someone on a poster. (Madame Tussauds is a confusing setting for Google Photos.) In those instances, you can hide the profile to avoid it clogging up your People section in the app.

With manual tagging, you get to quickly see what those hidden faces are, and remove them to completely delete their face group (hidden or not) from Photos. Yes, you could do the latter by unhiding each face then opening it and choosing Remove results from the overflow menu, but this is a faster way to get to it.

As for the former, here's a fun story to explain its advantage. I watched a tennis competition last year and took tons of pics. Being a Nadal fan, the first thing I looked for after uploading them was his face group, so I could see all his photos in one place. I couldn't find it. Djokovic, Thiem, and Anderson all showed up, but not Nadal. I didn't understand that. Then one day while scrolling through hidden faces, I noticed Nadal's was there. I don't know why or how it ended up hidden, but I wouldn't have noticed it had I not been doing some Photos spring cleaning. With manual face tags, I could've opened any pic of him and easily seen that his face was detected but hidden. 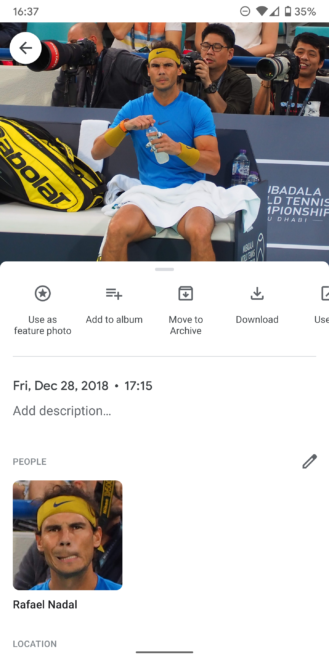 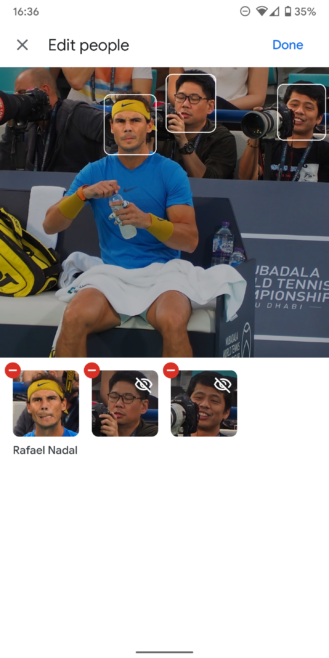 Left: Only Nadal shows up. Right: Hidden faces are still accessible, and can be removed.

Putting aside the inability to select any part of an image and label it as you want, manual face tagging is long overdue in Google Photos. For users who had wrong tags and couldn't fix them or those who just didn't know how to add tags, rename them, or merge them, the feature is simpler to use than everything that was previously available. You just need to remember how to get to it.

If you don't have manual face tagging in Photos v4.32.1, be patient. This seems to be a server-side update and will likely take some time to reach everyone.