Android 10 beta testing for ASUS’ last two flagships — the ZenFone 6 and the ZenFone 5Z — is already underway since August, though only for a small, closed group. The early ZenUI version for the 5Z reportedly came laden with a long list of bugs that essentially held off its public release for a while. ASUS appears to have addressed many of those flaws, and is now making the ZenUI 6 open beta available to a wider userbase of its 2018 flagship.

The Android 10-based ZenUI 6 beta update is already rolling out for ZenFone 5Z users registered for beta testing. It carries the version number 100.04.44.67 and has the newest October 2019 Android security patch applied. While many issues have been resolved since the last release, this version still has some known bugs that need to be squashed in future releases. Here is the official list:

Release notes for ZenUI 6 open beta based on Android 10

All the Android 10 goodies are naturally a part of this update, including some prominent ones like single-bar gesture navigation and system-wide dark mode. In addition to these, ZenUI 6, though a light Android skin, will get its own set of handy features — a native screen recorder, a special mode for one-handed use, Game Genie, and more — as XDA notes.

ASUS started sending out emails to registered beta testers earlier today informing them about the OTA rollout that supposedly has no geographical restrictions in place. You can sign up for an ASUS Member account to be a part of this testing team and receive future beta updates over the air. Alternatively, you can download the 1GB update file from the link below and flash it manually on your ZenFone 5Z. Make sure to rename the zip file to UL-Z01R-WW-100.04.44.67-user.zip before initiating the installation process. 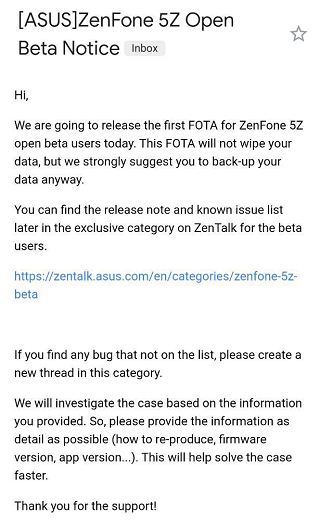 Even though ASUS claims that the update won’t wipe down your data, it’s recommended to do a complete device backup to be on a safer side. The Taiwanese brand hasn’t shared any timeframe for the stable version's release, but we think it shouldn’t be far off with the public beta now live.

A couple of weeks after the ASUS ZenFone 6 received the Android 10 update through stable channels, it’s time for its predecessor to follow suit. The stable version of ZenUI 6 packing a ton of Android 10 goodies is being rolled out to the ZenFone 5Z starting today. The Taiwanese brand has lately been pushing for a near-stock custom UI, and in line with that, it has removed a lot of its preinstalled bloat.

Here is everything that will change on your ZenFone 5Z with this update:

This ZenUI 6 release carries build number 100.04.44.98, which is being gradually rolled out to eligible devices across markets. ASUS says that it may take a few days for everyone to receive this OTA update, though you can give it a manual check from the System updates section of the Settings menu.

Stadia Buddy Pass is rolling out, giving a friend of yours 3 months of free Pro service