A few weeks ago, I reviewed the XGIMI MoGo, a device that belongs to a rare breed of portable projectors with Android TV. A more expensive version, the MoGo Pro, is now available. It keeps most of the same specs and features, but ups the resolution to 1080p instead of 540p, and raises the brightness from 210 to 300 ANSI Lumens. The result is a sharper, slightly brighter image that makes this the best Android TV projector currently available. Whether it's worth the price hike, though, is a different story.

The MoGo Pro looks exactly like the regular MoGo, has the same features, and ships with the same accessories and cables. To avoid repeating myself, I'll be brief here and point you to my earlier MoGo review for all the details.

At 0.9Kg (nearly 2lbs), the Pro isn't the kind of "portable" product you slip in a pocket or small purse. It's more suited to be moved between rooms around the house or carried around in a backpack. Vents remain on the back of the projector, so plopping it on a couch or mattress to project on the ceiling will cause it to heat up. Controls are minimal on the device, but the remote provides everything you need and you can still use the Android TV remote app if you prefer. The ports are unchanged: headphone jack, HDMI input, USB Type-A, and a DC port for power. Given the "Pro" name and expensive price, I certainly would've liked USB-C. Instead, you get to lug around a large brick to charge the MoGo. Or, as some readers suggested last time, you can get a USB (A or C) to DC cable to make the charging process less of a chore. Thankfully, you shouldn't have to charge the MoGo while using it, as the battery lasts about four hours and thus sustains two average movies or a few TV episodes.

With the same processor, RAM, and storage, gaming remains a secondary use case here. Yes, you can connect controllers over Bluetooth and play some games, but performance won't be optimal. Media consumption, on the other hand, is the Pro's forte thanks to its Play Store compatibility and excellent image. Netflix support is absent: The service forbids access to lots of devices, including Google's own Nest Hubs and Anker's Nebula Capsule II projector, so there's not much to blame XGIMI for. However, you can download the Netflix phone app APK and use a mouse to control it, or you can check this YouTube video for a workaround that lets you run Netflix on the MoGo Pro through Kodi.

Luckily, plenty of other streaming and local playback apps, like YouTube, Plex, Amazon Prime Video, Google Play Movies, Spotify, MX Player, etc... are accessible. Plus, with Android TV you get an interface optimized for remote navigation, TV-friendly apps, Google Assistant, and the MoGo acts as a Chromecast target. You can even play music on it and group it with other speakers around your house in the Google Home app.

The biggest differentiation between the MoGo and MoGo Pro is the projection image's quality. The former has a barebones 540p resolution with 210 ANSI Lumens, while the latter raises those numbers to 1080p and 300 ANSI.

The resolution difference is immediately noticeable when the two projectors are placed side by side. The Pro's image is sharper, clearer, with more visible details and better text readability. Colors also appear to pop a little bit more. I didn't notice any major brightness difference though: Whether in a dark room or a dimly lit one, the Pro was only ever so slightly brighter. Given the 210 to 300 jump, I was expecting more, but I think the original MoGo was already plenty bright. Mogo (above) and MoGo Pro (below) projections. Click to see larger images and more detail.

The images above try to show the two projectors on the same wall, but keep in mind that photographing a projected image isn't the easiest thing to do. In reality and with video versus stills, the difference is more noticeable. Even my husband, who didn't know which was which, instantly pointed at the Pro and told me, "This one is better." But did he or I complain about the original MoGo when we used it over the past weeks? No, we didn't. The difference only became obvious when we put the two side by side.

A projector's image depends on many factors, including the smoothness and quality of the surface you're projecting on, distance to it, ambient light, projector's brightness, and then after all those factors are taken into consideration, you start thinking about the image's resolution.

That's really the crux of the issue with the MoGo Pro. It's very good, but if you're not too picky and don't have an irrational fear of the 540p number, the regular MoGo is just fine. After all, this won't be your main TV and you'll likely use it occasionally in spaces where you don't have a TV or can't install one.

Maybe. The MoGo Pro is one of the very, very few portable projectors with Android TV, and it's currently the only one with a 1080p resolution and a bright image to boot. The few issues I see (no Netflix, DC charger) can be mitigated, leaving very little to complain about. For those who have always wished they could have a TV on the bedroom ceiling or on the patio, this is a simple solution that doesn't involve any mounts or screws. Pair it with your favorite streaming or local playback app and you get one of the best smart TV experiences in a portable form factor that works anywhere.

Despite it being better than the regular MoGo, the Pro gets the same grade (an 8) because of its price. At the time of writing, it costs $550, while the MoGo is discounted to $340, making the difference even more flagrant. If you're not that critical of the resolution and only want a convenient way to occasionally watch some movies and shows outdoors or in rooms where you have no TV, save those $210 and get the regular MoGo. It's the smarter choice. On the opposite end of the spectrum, if you want an even better image and don't mind ponying up more, you should wait for the $850 XGIMI Halo, which ups the brightness to 800 ANSI Lumens.

Outside of XGIMI, you can only look at the Nebula Capsule II for a portable Android TV projector. It's not worth the current MSRP of $580, but if it drops down to $400, it's not a bad deal. 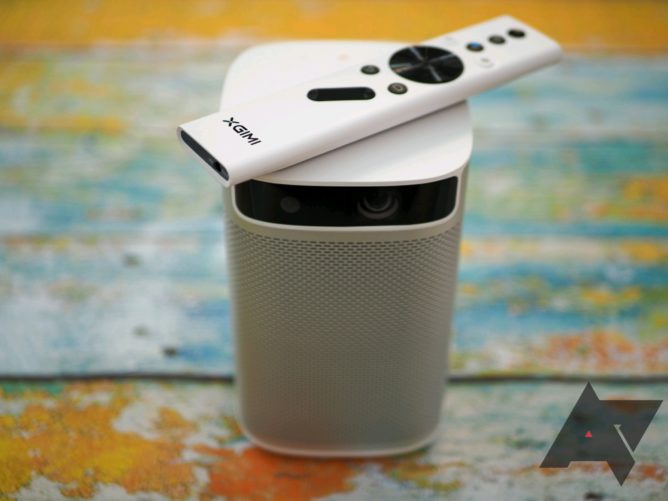 MediaTek's new 5G chipset aims for high-end devices, coming to the US next year

GRID Autosport finally arrives on Android, and you can pick it up today for $10