The trailer above offers a glimpse of the expected gameplay for Might & Magic Heroes: Era of Chaos. While there isn't much gameplay shown, the general premise revolves around players leading massive armies into real-time ranged and siege battles, and your troop formation plays a major role in how these battles will pan out. Much like every other strategy game of this nature, you can expect to collect, train, and upgrade the characters selected from a pool of 40+ troops and creatures. Both asynchronous and real-time PvP modes will be included, and of course, a heavy dose of nostalgia is expected.

As of October 24th, Might & Magic Heroes: Era of Chaos is available in New Zealand and the Philippines for testing, though there is no word when we can expect the official release in the West. We also don't yet know how the title will be monetized, but from what I've seen, I have no doubt that this will be a free-to-play release chock full of in-app purchases. If you'd like to pre-register, there are a few rewards you can earn, such as gold keys, Dragonsteel, Shadowsteel, gold, and a player skin. It's also worth noting that these rewards can be earned up to a week after release simply by installing the game.

While it's difficult to get excited about a new Might & Magic mobile game, I suppose it's good to see that Ubisoft hasn't given up on the franchise, even if the company is using the brand to cash in with an Android release. Still, I can't help but feel that this game will be ruined by free-to-play mechanics, and while we still don't know how the game will be monetized, the available screenshots clearly show a stamina system and an in-game currency. When you couple these details with the fact that this will indeed be a gacha game, it's clear that this will be yet another title banking on nostalgia to sucker people into playing and paying. I suppose if that's the sort of game you enjoy spending your time with on Android, then you may still want to pre-register for Might & Magic Heroes: Era of Chaos, so feel free to click on the Play Store widget below if you'd like to receive a few in-game rewards. Might & Magic Heroes: Era of Chaos is officially available on the Play Store 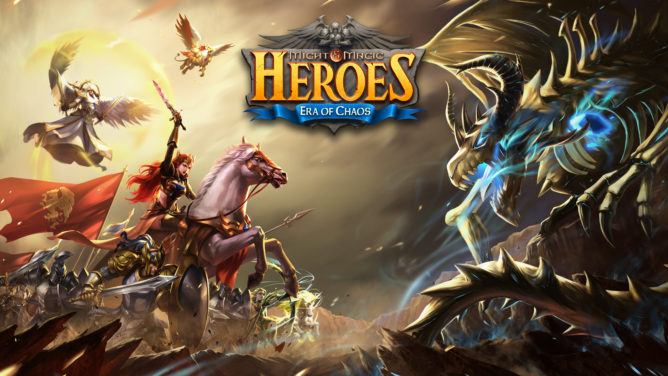 Three weeks ago, we learned about Ubisoft's latest Android release Might & Magic Heroes: Era of Chaos, a mobile spinoff of the Might & Magic series that was clearly designed to capitalize on nostalgia and name recognition. Well, after a short pre-registration period, the game has been unceremoniously released today, and as expected, it's free-to-play, which means it contains in-app purchases that range up to $99.99 per item. Loot boxes are also in the mix since you'll have to collect heroes in order to build your team. At its core, this is a strategic game that offers large real-time siege battles, and like most games of this nature, you can expect a plethora of modes to work your way through as you collect and upgrade your heroes. While I can't say this type of game is my cup of tea, if you'd like to check it out, you can do so through the Play Store widget linked in the article above.

Begin Your Rise to Power in Might & Magic® Heroes®: Era of Chaos, Out Now on iOS and Android

The legendary Might & Magic series returns in this brand-new tactical RPG experience on mobile.

San Francisco — November 26, 2019 — Today, Ubisoft announced that Might & Magic® Heroes®: Era of Chaos is now available for free on iOS and Android devices. Developed by Playcrab, the game brings the high-fantasy universe of Heroes of Might & Magic in a deep strategy gameplay experience tailored for mobile. Featuring nine modes, the game offers players near-endless challenges as they build an army of iconic Might and Magic heroes and creatures.

The game’s strategic gameplay demands careful analysis of the battlefield. Players have to select units and position them tactically on the battlefield prior to battle. Players can unlock and collect a variety of heroes and units from an expanding roster. Each hero and unit belongs to a specific Might & Magic faction: Castle – faction of humankind, Inferno – faction of demons or Necropolis, the faction of the Undead. Understand the unique abilities of each faction and unit to craft the best army by your side.

Answer the Queen’s call, march to war alongside Queen Catherine Ironfist and restore the kingdom of Erathia, which has fallen into dark forces. Other single-player modes include the Trial of Angels, a multi-floor arena with ever-increasing difficulty and rewards, 95 additional missions of the Underground and special PvE modes (Crypt, Dwarven treasury and Dragon Utopia) for special items.

Players can also challenge rivals in one of the PvP modes. Engage in frantic duels in the Arena, join real-time synchronous combat in the Duel of Champions (a weekly season-based ranked arena) or enter pure strategic battles in Duel of Heroes. In addition, players can team up with like-minded adventurers in Guilds. Explore together the huge world map overflowing with rare artifacts, chests and hordes of demons and enemies. Still hungry for more? Join Guild Wars, face two other Guilds and climb to the top of the weekly leaderboards with your guild mates.

Might & Magic Heroes: Era of Chaos* is available to download now for free on iOS and Android. The game is available worldwide except in Japan, Indonesia, Thailand, Hong Kong, Taiwan and Macau. Players who pre-registered via the website of the game or the Google Play store page will receive their reward at launch directly within the game.

*Requires a compatible smartphone and an online connection

GRID Autosport finally arrives on Android, and you can pick it up today for $10