The buildup to the release of GRID Autosport on Android has been a long one, but if you're curious as to what you can expect from this racer, the release trailer above should provide a quick look. Originally GRID Autosport was designed for PC and consoles in 2014, and so the title has always existed as a premium racer. Luckily Feral has done little to change this setup for its mobile ports, though the game has been tweaked for touchscreen play, of course, physical controller support is also included for those that prefer something more tactile. At its core, this is a racer that offers a plethora of racing modes and cars, which makes it suitable for just about any racing fan. Whether you prefer racing on dirt or city streets, GRID Autosport has you covered. I'd also like to mention that there are many different difficulty options on offer, so no matter your skill level, you can adjust the difficulty so that you can enjoy all of your races. 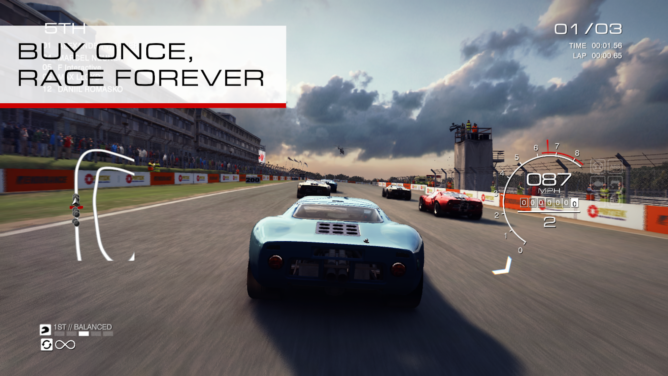 As I already stated, GRID Autosport is a premium release, so you can pick up the Android port today for $9.99 without having to worry about any advertisements or in-app purchases interrupting your gameplay. Keep in mind that this is a demanding game, so you will need about 4GB of free storage just to install the title, and your device will have to be running Android 9 or later. Of course, if you're worried that you may not be able to run the game, Feral has been kind enough to offer a device support list, which I've pasted below.

Over the years, I've seen many people ask what the best racer is on Android, and I've never actually had a solid answer to this question, that is, until today. Hands down GRID Autosport is one of the most visually impressive racers available on Android, and the fact that it's a premium release easily places this title above many of its competitors on the Play Store. Honestly, if you're looking for a worthwhile console racing experience on mobile, GRID Autosport is what you're looking for. So if this sounds good to you, and you'd like to purchase the title today, you can do so through the Play Store widget below.

GRID Autosport out now on Android

A trailer for GRID Autosport on Android is available now.

All add-on content ever released for the game will be included.

GRID Autosport requires 3.9GB of free space, Android 9.0 (Pie) and is supported on the following devices:

Editors
For logos and other game graphics, visit the Feral Press Area for GRID Autosport on Android. If you don’t have a login for the press area, email [email protected].

About Feral Interactive
Feral Interactive is a leading publisher of games for the macOS, Linux, iOS, Android and Nintendo Switch platforms, founded in 1996 and based in London, England. It is responsible for such hits as GRID Autosport™ for iOS, Android and Nintendo Switch, ROME: Total War and Tropico for iOS and Android, Total War: THREE KINGDOMS, DiRT® 4™,Total War: WARHAMMER II, Life is Strange™: Before the Storm, A Total War™ Saga: THRONES OF BRITANNIA, Rise of the Tomb Raider®, Deus Ex: Mankind Divided, DiRT: Rally®, F1™ 2017, HITMAN™, XCOM® 2, Alien: Isolation™- The Collection, Company of Heroes™ 2, Middle-earth: Shadow of Mordor™ GOTY, and Empire: Total War™ for macOS and Linux, and The LEGO® Movie 2 Videogame for macOS. Visit the Feral Interactive website and find us on Twitter or Facebook.

About Codemasters
Codemasters, the award winning video game developer and publisher, has a 25-year heritage. With titles distributed globally, Codemasters is a leading developer and publisher of driving and racing entertainment games including DiRT®, GRID™ and the official BAFTA award-winning FORMULA 1™ series of videogames. In March 2010, Reliance Big Entertainment Ltd. (RBEL), a part of India’s Reliance ADA group, acquired a 60 per cent shareholding in the company, alongside existing investor, Balderton Capital, the leading European venture capital firm. For more information on Codemasters’ product portfolio, please visit http://codemasters.com. Join in the conversation with @codemasters on Twitter or Like us on Facebook, http://facebook.com/codemasters.