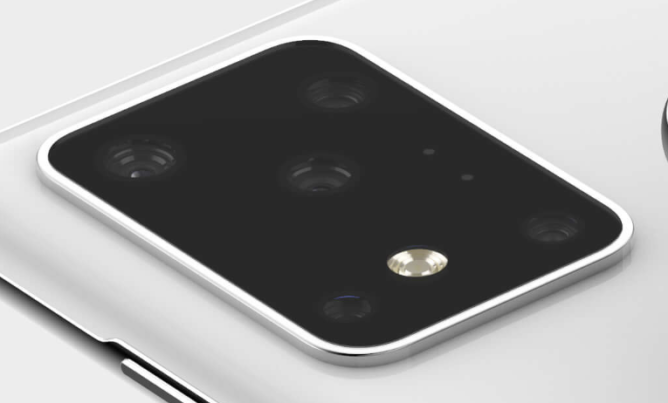 A face only a mother could love. Image: CashKaro

According to the information associated with the renders, the S11+ will have five total camera lenses, plus two smaller sensors — with one rumored to be laser autofocus. The placement of the flash assembly isn't yet confirmed, but apparently, that haphazard configuration of cameras is. At least one of those lenses is expected to provide a 5x optical zoom, with the same report claiming the phone will also have a 108MP primary camera. Preliminary dimensions for the phone based on these renders clock in at 166.9 x 76 x 8.8 mm, with a chunkier 10.2mm thickness at the cross-eyed camera bump. The back appears to be a single piece of glass outside the black-masked camera hump and its bezel, curved on the left and right edges, much like the glass covering the front display.

Power and volume buttons are together on the right side according to the images provided, studded into the thin metal frame (though CashKaro says they're on the left — strange). As with the smaller models, there's no headphone jack, and the lone USB Type-C port rests dead-center on the bottom polished metal edge next to the down-firing speaker and what looks like a microphone hole. The polished metal top is unadorned, save what we assume is a mic-hole cutout.

As with previous models in the line, there's no visible fingerprint sensor, so it almost assuredly has an in-display reader, like the prior Note10 and S10 series.

It's possible (as in: we sincerely hope) that these renders showing the trypophobia-inducing, seemingly random camera configuration are in error, but OnLeaks has a pretty good record, and his previous renders for the smaller phones showed cameras in a line/grid as common sense and decency would expect. It's not the first time we've seen such a confusing camera assembly, but it's still pretty odd. If there's a reason for it, perhaps Samsung can explain it later.