16:9 aspect ratios were the norm for years, but that's not the case anymore. These days, we don't even bat an eye at 18:9, 18.5:9, and 19:9 ratios. In a curious attempt to stand out from the crowd, Sony slapped some ridiculously tall 21:9 displays on their latest phones, including the Xperia 10 Plus that is being discounted to ~$330 right now.

The Xperia 10 is equipped with a 6.5" 1080p LCD, a Snapdragon 636, 4GB of RAM, 64GB of storage with microSD expansion, dual 12MP + 8MP rear cameras, an 8MP selfie-shooter, and a 3,000mAh battery. It also has a side-mounted fingerprint sensor and *gasp* a headphone jack. Our own Taylor called the Xperia 10 "really long and really boring" in his review, with his biggest complaints being the tall aspect ratio, the cameras, and the price. It should be noted that this has Verizon support in addition to being GSM unlocked, though Sprint compatibility is absent. 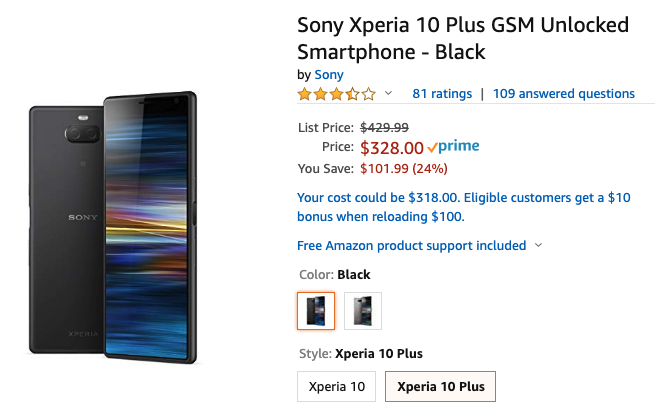 With this $100 price drop, the Xperia 10 Plus is now more appropriately priced. Amazon is technically the cheapest at $328, but B&H and Best Buy aren't far behind at $329.99. It's available in black and silver from Amazon and Best Buy, though B&H only has the 10 Plus in black for whatever reason. Browse the links below to pick one up.

Zadarma VoIP leverages the cloud to connect your business with customers around the globe ...