The benefits of a mesh Wi-Fi system are numerous: better coverage, no single point of failure, modular expandability, and maintenance of a single SSID and connection throughout the home. With numerous players in this competitive field, prices have become a lot more affordable on these once very expensive mesh systems. Linksys, a well-known name among networking companies, has the Velop line, and there is a significant markdown today on one of its offerings. A two-pack of tri-band routers currently only costs $200 on Amazon, which is a saving of $100 on the usual $300 retail price.

Linksys claims two of its tri-band nodes can easily blanket strong Wi-Fi signals to multi-story homes with three to five bedrooms (up to 4,000 square feet of coverage). With tri-band connectivity speeds (867 + 867 + 400 Mbps, per node), demanding scenarios such as multiple streams of 4K media shouldn't be a problem. Each node can handle up to maximum 32 clients, so two nodes will be enough for about 60 devices, suitable for a modern home. 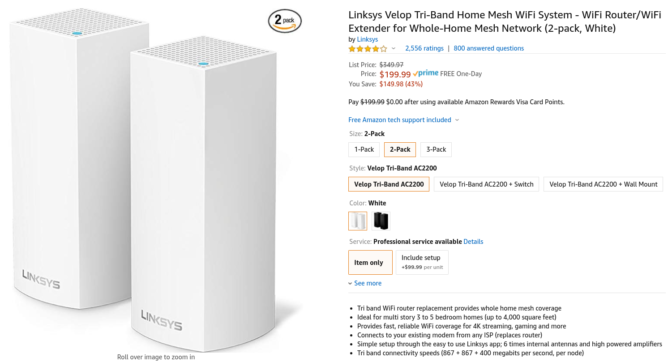 Should you require even more coverage later down the line, additional nodes can be added to vanquish any dead spots.

For more Black Friday deals, check out our comprehensive and frequently updated roundup.