Given the recent rise of truly wireless earbuds, we're starting to see some quality sales on the previous generation of tethered Bluetooth earbuds. Today, we have a deal from Jaybird (a headphone maker known for their fitness-focused lineup) on their X4 wireless earbuds, which are marked down to $70 on Amazon— their lowest price yet. It looks like the X4s have been available for around $110 for most of the year, and this latest reduction could save you an additional $40.

AP's own Taylor Kerns spent some time with the Jaybird X4's last year and found them to be an excellent set of earbuds for the fitness crowd that featured high-quality sound and a manufacturer's first IPX7 rating. However, they also brought along some baggage from the days before completely wireless models with handy charging cases became the norm for Bluetooth buds. Namely, a proprietary pin-based charging dongle that connects via USB Type-A. Thankfully, you won't be charging these earbuds too often as Jaybird claims 8 hours of battery life per charge. 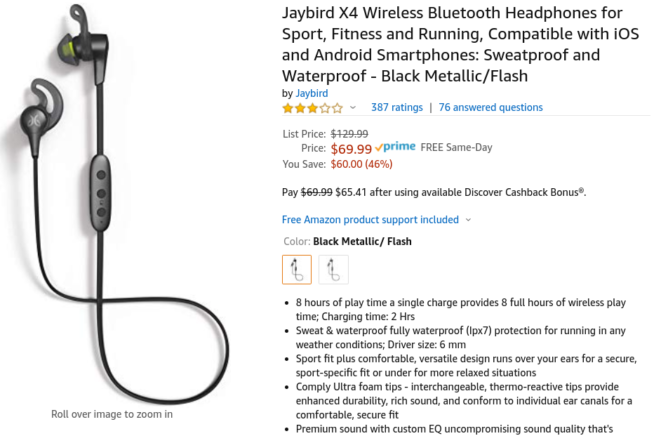 While the X4s have seen previous markdowns, this is the lowest price we've seen yet for these headphones. For more deals like this, make sure to check out our Black Friday 2019 Hub.