Last month we learned that the next Five Nights at Freddy's release would enter into early access in November, and thanks to a recent press announcement, it has been revealed that the official launch of Five Nights at Freddy's AR: Special Delivery will take place today. It would seem early access was opened worldwide this past Friday, and today marks the official release. Much like the previous titles in the series, you'll have to confront malfunctioning animatronics in an attempt to survive their horrors, but this time around, you'll do so in a game made exclusively for mobile devices that uses augmented reality to bring its jump scares to the real world.

The trailer above offers a cinematic look at what's expected from Five Nights at Freddy's AR: Special Delivery, though I can't say the game is as scary as the trailer makes it seem since your environment has to be lit well for the AR functionality to work. The game starts with a creepy animatronic visiting your current location, and it will be your job to hunt this robot down through the use of your Android device's camera. Just point the camera at any area you'd like to search, and if the screen starts to show static, you're getting close. Once the robotic creature pops out, you can zap it with an electrical shock, but if you miss, then you're dead. The goal is to capture these animatronics in order to send them out to auto-collect the in-game items necessary for advancement.

Much like any other augmented reality collection game on the Play Store, Five Nights at Freddy's AR: Special Delivery is a free-to-play release, so it comes with in-app purchases that range up to $99.99 per item. These IAPs are useful for purchasing items like currency, devices, and lures, which means that anyone who acquires these items will have an easier time advancing in the game. 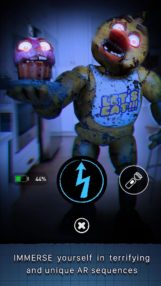 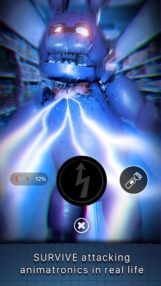 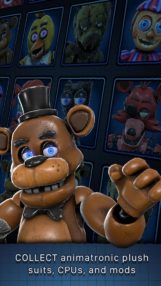 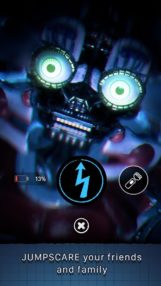 All in all, Five Nights at Freddy's AR: Special Delivery is a polished audio/visual horror adventure game, and I'd say the title performs well for what it offers, though I'm not so sure how scary it really is thanks to its need for adequate lighting. I'm also not very keen on the game's collection aspects or the monetization, though I suppose players will need something to work towards, and collecting characters has proven to work well in many titles. So if you're interested in picking up Five Nights at Freddy's AR: Special Delivery to see for yourself how it stacks up, feel free to grab the install from the Play Store widget below. 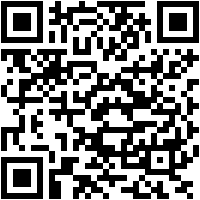 Freddy and His Frightful Friends Into Their Reality

Redwood City, Calif. - November 25, 2019 - Illumix, an integrated gaming and technology company that is transforming the future of mixed reality games, today released Five Nights at Freddy’s AR: Special Delivery (FNAF AR). It is the next terrifying installment in the FNAF franchise, and is available on both iOS and Android mobile devices. The title forefronts AR gameplay as the core mechanic instead of using it as an optional or supplementary feature. Illumix’s new perspective on immersive AR gaming leverages 3D audio, upgraded AR graphics, haptics, and more.

In FNAF AR, players will confront malfunctioning animatronics in their real world and attempt to survive these horrors come to life as they have never been seen before. As a part of the continuing FNAF storyline, players subscribe to Fazbear Entertainment’s brand new on-demand “Fazbear Funtime Service” to receive special in-person visits from their favorite animatronics. Due to unfortunate circumstances, those who subscribe get more than the entertainment they were expecting from the visiting animatronics.

“I hope you enjoy my visit” said Freddy Fazbear. “I’m planning on making it extra special for you!”

Five Nights at Freddy’s AR: Special Delivery ensures that players are not powerless in the situation, as handy defense elements help them survive attacks - whether they be from rogue animatronics or custom-made ones sent by the player’s own friends. Social elements of the game will allow the attacked to get revenge and climb the leaderboard by sending their own FNAF AR animatronics after their attacker, or anyone else they choose. Starting today, all players will confront an endless stream of hostile animatronics in augmented reality that will follow them wherever they go. The question is, how long can players survive? And can they figure out just what is happening at Fazbear Entertainment?

● Survival tools and access to limited resources to combat animatronics - including battery, flashlight, and shocker

● Real-time location based gameplay, where FNAF animatronics will pay you a visit wherever you are and wherever you go--home, work, the park--the possibilities are endless

● Animatronic customization through collection of parts, CPUs, plushsuits, and mods that are used to assemble, repair, and deploy player’s own hotwired animatronics

● PvP mode where players send their own FNAF animatronics after friends, and try to get the highest streak on the leaderboard

Fans of Five Nights at Freddy’s have viewed video content, covering the PC games, mobile ports, and more recent VR experience, over eight billion times. They have downloaded the various games over 100 million times and will be getting a FNAF feature film, which is currently in the works. Five Nights at Freddy’s AR: Special Delivery is now bringing a whole new dimension to the franchise via augmented reality.

An integrated gaming and technology company, Illumix’s goal is to transform the future of mixed reality with environmentally-intelligent, world-scale AR games. Illumix has raised approximately $10 million to build augmented reality games from top venture capitalists, including Maveron and Lightspeed. They aim to make more meaningful AR games, not novelties or companion experiences, by focusing on building powerful user experiences that drive their core technology.