Google launched the Pixelbook in 2017, but it has thus far refused to offer a worthy successor to this machine. The Pixel Slate and Pixelbook Go don't really fill the same niche, but the OG Pixelbook is still a capable laptop. It's coming down in price, too. The top-of-the-line model costs $1,649 from Google, but Best Buy has the same device for $352 less.

The Pixelbook runs Chrome OS like many other (cheaper) laptops, but it does offer some things cheaper Chromebooks do not. For example, the high-resolution 3:2 display is fantastic. The keyboard is also one of the best available on any laptop. The design is, in my opinion, pretty great as well. 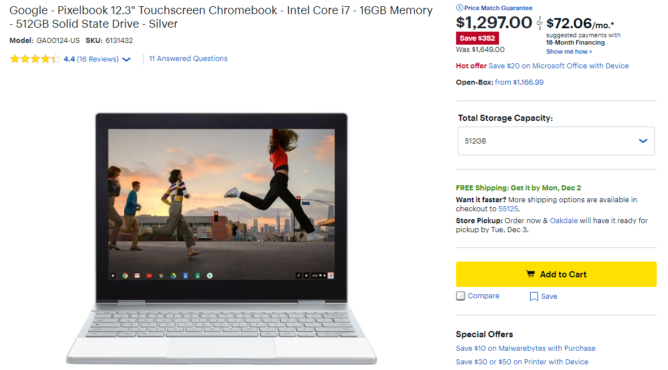 Still, almost $1,700 for the fastest Pixelbook with 16GB of RAM and 512GB of NVMe storage is too much, especially two years after release. Best Buy has knocked $352 off the MSRP for a final price of $1,297. Best Buy stores don't carry this model anymore, but you can have it shipped to you or a local store for free.

(Update: Amazon too) Arlo Pro 3 multi-camera kits are up to $110 off at Best Buy