We already knew the Pixel 4 lineup would be getting a $200 discount this Black Friday. Even Google teased it a few days ago and promised the deal would start on November 24. Looking at my calendar, it sure seems like today is the day and the discount has already popped up at a few online retailers.

Despite all the criticism (a tradition for all Pixels at this point), the Pixel 4 remains a good phone with a fantastic camera. Its mediocre battery, meager storage options, and lack of a fingerprint reader shouldn't be discounted, but when the price drops by $200, they become a lot more palatable. So if you were waiting on a deal and hoping to snatch Google's latest , you can now do so.

The discount is already live at Best Buy, B&H, Walmart, and Abt. We know for a fact that the Google Store should join them, and Amazon will likely follow suit. We'll update this post once they do and if we find the offer at other retailers. 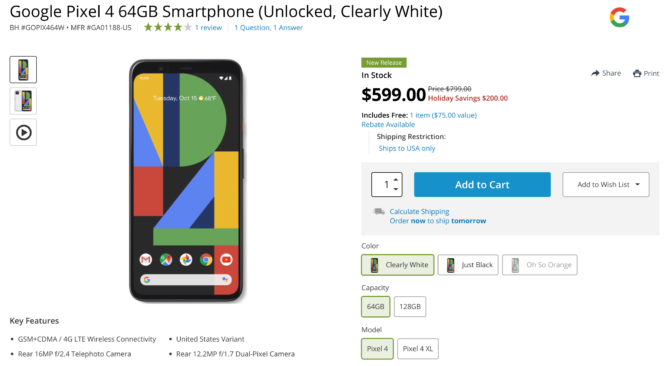 According to Abt, the deal should last until December 2, i.e. Cyber Monday. So you have a week to make up your mind, but given Google's terrible shipping delays, you may want to hurry if you hope to get your shiny new toy before the holidays.

For more deals, including on Google Hardware, check out our big roundup here.

The deal is now live on the Google Store and we've added the corresponding links above.

This $200-off promotion has carried over to Amazon as well. If you have an Amazon rewards card or Prime membership for faster shipping, you can snag one there with those associated benefits.

We've integrated Amazon's listings into the links above.

The Jabra Elite 65t wireless earbuds drop to $99, the lowest they've ever been