Ever since Samsung forsook Wear OS and decided to blaze its own trail with Tizen, the company has been churning out some great smartwatches. The Gear S3 Frontier may be three years old now, but it still remains stylish and performant today as a smart companion for your phone. After fluctuating quite a bit on price lately, it has settled down to $189 at Amazon.

Although the Gear S3 Frontier is older than the Galaxy Watch and Galaxy Watch Active2, it's still a very competent, and downright good, wearable. It features a great 1.3" 360x360 AMOLED display, intuitive and satisfying rotary bezel for UI navigation, 4GB of onboard storage, a speaker and microphone, a great battery life, and full Samsung Pay (both NFC and MST support). 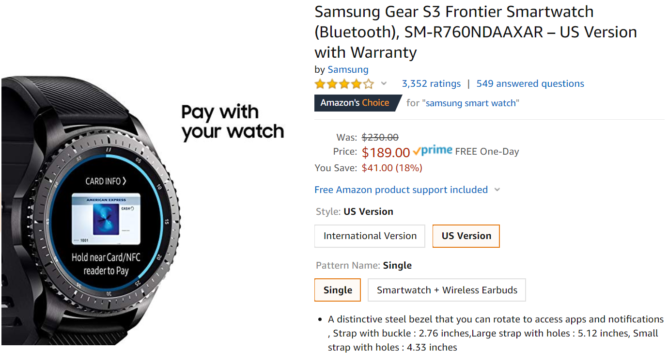 Samsung hasn't been neglecting the software side of things either. Both the Gear S3 Frontier and its cousin, Gear S3 Classic, have been updated to Tizen version 4.0.0.4, keeping the watches fresh with the newer One UI interface. I personally own a Gear S3 Classic and it's still my daily driver. After installing a new battery last year, the battery life remains superb.

If you have a bit more to spend, you might want to check out Samsung's Black Friday sale on the Galaxy Watch and Galaxy Watch Active2.